As if things could not get any worse for Fianna Fail and Fine Gael, the first national opinion poll since the general election shows Sinn Fein building on its success. 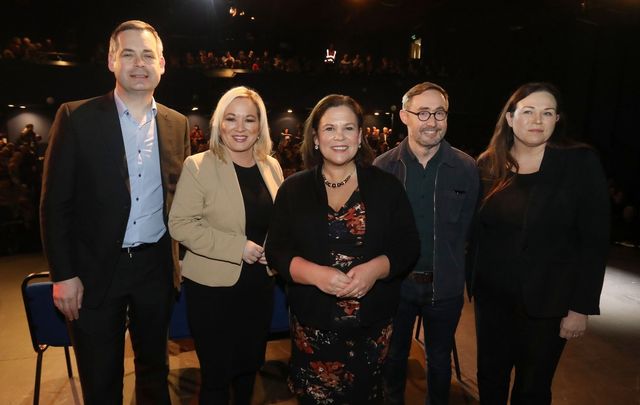 As if things could not get any worse for Fianna Fáil and Fine Gael, the first national opinion poll since the general election shows Sinn Féin building on its success.  The poll, published by The Sunday Times last weekend, has Sinn Féin on 35 percent, 10 points ahead of the 25 percent vote it got in the election.

Fianna Fáil was down two points on its election vote to 20 percent and Fine Gael was down almost three points to 18 percent.  Fianna Fáil leader Micheál Martin and Fine Gael leader Leo Varadkar must have been choking on their cornflakes on Sunday morning.

Adding to this further boost for Sinn Féin was the turnout last week at the party's controversial rallies around the country, reinforcing their claims of winning the election despite getting only 25 percent of the vote.  In the heated atmosphere at the meetings, there were outraged statements about their right to be in government and angry denunciations of the refusal by both Fianna Fáil and Fine Gael to include them in government formation talks.

To be fair to Sinn Féin, the meetings were a long way off the Nuremberg-style rallies that some people here had feared, although they were large and super-charged.  They were, however, a clear demonstration of the blatant populism that underlies the Sinn Féin's success in the election. 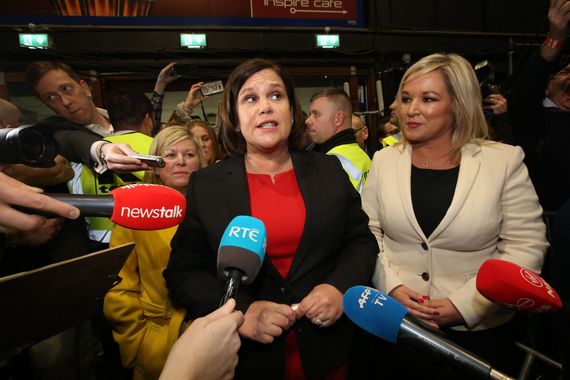 If populism is making unrealistic promises to solve all problems regardless of cost or consequences and telling everyone what they want to hear, then the rallies were it with bells and whistles on.

The housing shortage, unaffordable rents, delays in the health service, the cost of living, poor transport, expensive child care and everything else that is bugging people here -- Sinn Féin has all the quick and easy answers that will cause no pain to anyone apart from the rich and powerful in Irish society.

The message went down a treat at the rallies. People voted for change, so let's Make It Happen.

The same Make It Happen slogan was on posters advertising the rallies, which is worrying for those of us who believe in the democratic process since it carries an implied threat.

Read more: “We are just bugs to them” - Ireland’s young voters got the message

The fact is the election is over.  Sinn Féin got 25 percent of the vote.  That's not enough to make anything happen unless they can be part of a coalition government.  And the other parties have the right to exclude or include whoever they wish -- it's the same across Europe when coalition governments are being formed.

Sinn Féin's populism may lack the more objectionable aspects of far-right parties elsewhere in Europe, but it has replaced that with their own brand of left-wing populism.  It comes down to the same thing -- telling people what they want to hear rather than what they should be told. 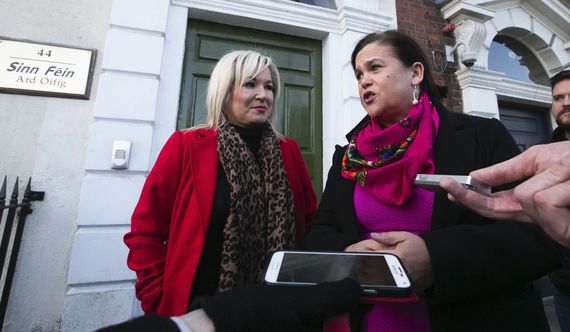 Michelle O'Neill and Mary Lou McDonald outside the Sinn Fein offices, in Dublin.

An example of this (and there are many examples) was the Sinn Féin response to our pensions problem, one of the unexpected issues to become a big deal during the election campaign.  Like other European countries, Ireland has an aging population, and we will not be able to pay the present very generous state pension to old folk in the future unless we take action.

Part of the solution agreed by the two main parties over a decade ago was to gradually increase the retirement age in seven-year intervals.  It went up from 65 to the current level of 66 in 2014 and was due to increase to 67 in 2021 and 68 in 2028.  It's not what anyone wants, but since we all live much longer these days it's not unreasonable.

Not for Sinn Féin, however. They saw this as an opportunity during the election and gave an absolute guarantee that the pension age would revert to 65 and stay there.

When it was pointed out that the proportion of working people in the population would not be able to fund the pensions of the growing proportion of retirees in the future, Sinn Féin's leader Mary Lou McDonald came up with a novel solution during one debate.  No need to worry, she said, demographics will solve that.

When Sinn Féin delivers all the new houses, fixes health, and provides cheap child care, young couples here will have lots of children.  So the population will be rebalanced and the problem will be solved.

To say this is simplistic is an understatement.  It's also dangerous because it's playing opportunistic politics with the future well being of our old folk.

It's not something any responsible party should do.  But it's a populist message -- pensions at 65 forever for everyone -- and there's no doubt it won votes for Sinn Féin.

Another example of their blatant populism in the election was the promise to abolish property tax.   Uniquely among left-wing parties everywhere, else Sinn Féin is against property tax, the form of a wealth tax which is the easiest to collect and which exists in almost all western countries.

They claimed they would replace it with a fairer form of wealth tax, but the real reason was a shameless attempt to attract votes.  They were against increasing carbon tax for the same reason, in spite of the need to act on climate change.  And they were in favor of slashing income tax for most people, always a big vote-getter.

The same cynical, populist approach was evident across the Sinn Féin platform in the election -- and it worked for them.   This could be seen particularly in what they had to say on the two big issues, housing, and health.  They simplified what are complex problems and promised extravagant, instant solutions.

The reality is that it will take several years to fix the housing problem, a legacy of the crash.  Progress is being made and the latest statistics on housing and rents show this.

But Sinn Féin is not interested in the progress, preferring to play up the crisis and demonize Housing Minister Eoghan Murphy as an uncaring "posh-boy."  The fact is their own housing spokesperson Eoin O Broin also went to an expensive fee-paying school and university, as did McDonald who comes from a very comfortable background in a leafy Dublin suburb.  But somehow they are not considered "posh." 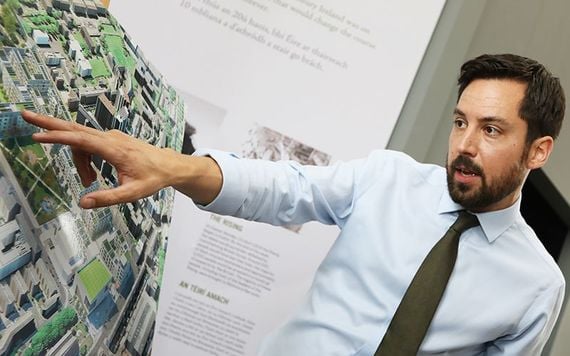 Stooping to this name-calling is textbook populism (like Trump's "Crazy Bernie," "Mini Mike," etc.) and it's effective.  The posh boy slur was also used against Health Minister Simon Harris to imply he is out of touch and does not care.

The fact is all parties (including Sinn Féin) have agreed on a long-term program, Slaintecare, to improve our health service (already one of the best-funded in Europe).  Despite what Sinn Féin said during the election, there is no quick fix.

There are no instant solutions to any of the problems that made many voters desert the main parties in the election and turn to Sinn Féin's simplistic promises of "change.”  Sinn Féin knows this but they carry on with the populist pipe dream anyway.

Reducing everything to a short slogan -- Make Change Happen -- is classic populism, like President Trump's Make America Great Again or British Prime Minister Boris Johnson's Get Brexit Done. Sinn Féin has not gone as far as Make Ireland Great Again hats, but they're heading in that direction.

This populist stuff would come at an enormous cost, which is why Sinn Féin's election promises added up to around €22 billion, double the amount of fiscal space (extra spending capacity) that the Department of Finance estimated might be available over the next five years.  And there is now growing doubt about whether even €11 billion will be available, because of a harder Brexit, corporation tax reform and the effects of the coronavirus on world trade and our tourism industry. 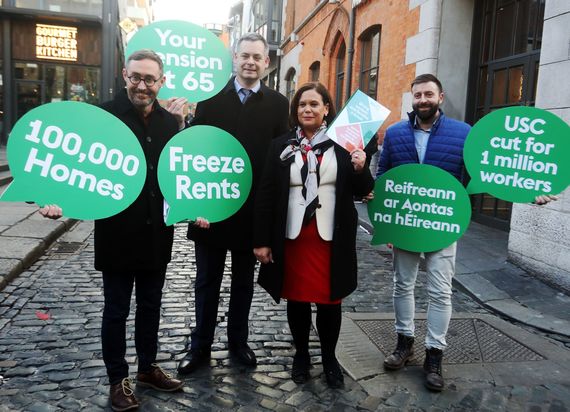 Sinn Féin's answer to this and to any criticism of their economic policy is to pile more taxes on the wealthy, the banks, the multinationals and so on, despite the damage, this may do to the economy at a very uncertain time.  And they want to borrow even more in spite of our massive national debt.

Sinn Féin's populist approach to the election may have been irresponsible but, as we said, it worked.  Ireland is not immune to the tensions faced by other neo-liberal countries where there is resentment among people who feel left behind and ignored by the established political parties and the posh boys (and girls) who run them.  It's happened across Europe and is behind the rise of Trump and Johnson.

It's a powerful force that has been harnessed very effectively by Sinn Féin, which spent three times the combined amount spent by other parties here on social media during the campaign to get their populist message across.  More than anything else the outcome of the election showed a strong protest vote, a level of dissatisfaction among people who are struggling (despite full employment and a strong economy) and want an easier life at no cost to themselves.

This self-interest on everyday issues was the main reason for Sinn Féin's strong performance in the election.  It completely overshadowed concerns about Sinn Féin's links to the IRA and its democratic structure.

In fact, however disappointing this may be for Sinn Féin supporters in Irish America to hear, Sinn Féin's policy on a united Ireland was irrelevant to the protest voters here.  The election outcome had nothing to do with any desire for a united Ireland.

Sinn Féin is well aware of this, of course, which explains why they now shoehorn the North into their change agenda whenever they are asked. They were at it during the rallies last week with their insistence that the people had voted for change, for a solution to the housing crisis, a better health service -- and progress towards a united Ireland.

The message is repeated in every interview, with the united Ireland policy squeezed in between all the bread and butter issues.  It's so transparent that it's comical.

But it's also revealing since the real Sinn Féin agenda is not a populist drive to fixing everything.  It's to get a united Ireland regardless of whether people here and in the North want it or not.