"The view from actual voters of why they voted Sinn Féin was actually a very clear summary of the massive gap between the comfortable middle-class reality of Fine Gael and Fianna Fáil, and the true lives of millions of poorer Irish people." 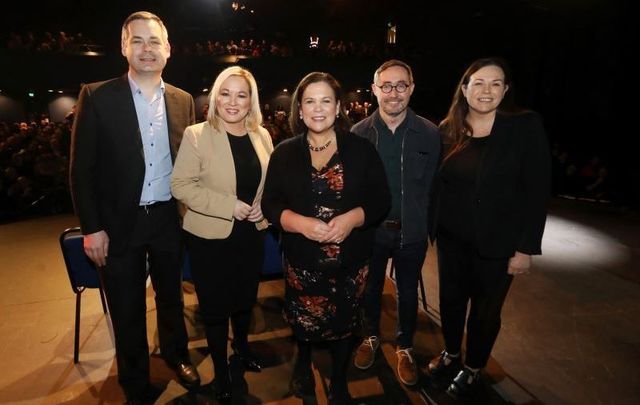 Sinn Féin's support cannot be "dismissed as a protest or youth vote."

The best piece of writing on the Irish election was not another of the myriad scare scam stories from Fianna Fáil and Fine Gael that Sinn Féin are untouchables and not fit for government.

A flood of such stories suggested that the only reason Sinn Féin ended up with most votes in the recent election was they had hoodwinked the Irish electorate in some way, but they remain an alien force.

But the view from actual voters of why they voted Sinn Féin was actually a very clear summary of the massive gap between the comfortable middle-class reality of Fine Gael and Fianna Fáil, and the true lives of millions of poorer Irish people.

Senator Bernie Sanders would immediately recognize and understand that the same wealth gap and lack of affordable housing that has driven much of his campaign is exactly the same problem in Ireland.

The view from Clondalkin: If Sinn Féin don’t get in, ‘there will be marches’ (via @IrishTimes) https://t.co/SQTAMcQsA4

Grace Wills, 61, sitting in a local community center told Holland, “We’re not all traditional Sinn Féin voters at all. I think a lot of us would have looked to Labour back in the day. But we’ve had to say to the old guard, they are not fit to govern. People felt by voting Sinn Féin things might change.”

Jackie Colgan, 47, also interviewed by Holland, teetered on the verge of desperation about her family situation.

“I am very emotional about this election,” says Colgan.  “Fianna Fáil and Fine Gael, they have destroyed our country.

“I have a grown son aged 30 living with me in the box room. My daughter has a degree in social care and shares a bed in my house with her five-year-old daughter. My other son, who has a great job, could never afford a house – even to rent. He rents a room in a house.”

There was a “feeling of Christmas” as results came the day after the election showing spectacular returns for Sinn Féin, she told Holland.

Anthony Rochford, 27, said that in the past he “didn’t really have any interest in politics. I felt it was the same cycle, same thing and nothing was going to change.”

He said that like all his friends, he lives with his parents and will never own a home. “I realized how important it was to vote to get change,” he felt.

A few elections back only 37 percent in the area voted.  Now it’s up to 60 percent, just below the national average. Sinn Féin romped home in the area.

The vote cannot be “dismissed,” says Wills, as a protest or youth vote.  “All generations voted for Sinn Féin. It wasn’t a protest vote. It was a hope vote. Please give us some hope.”

“They sniggered all the way through those debates at Mary Lou (McDonald Sinn Féin leader), but really they’re sniggering at us.  People like us, we are just bugs to them.”

There are clearly very deep wells of disaffection among the working poor in Ireland.  It looks very likely that Fianna Fáil and Fine Gael will in fact, go back into power together and keep Sinn Féin out.

It is clear, however, that unless the new government tackles massive issues such as affordable homes and interminable waits at hospitals, the two oldest parties in Ireland, who these days are getting just half the vote they used to get, might well be in danger of political extinction.