Bronx-born and raised John Cummings is hoping to pull off a huge upset on Election Day – defeating Democratic star Alexandria Ocasio-Cortez for her House seat. 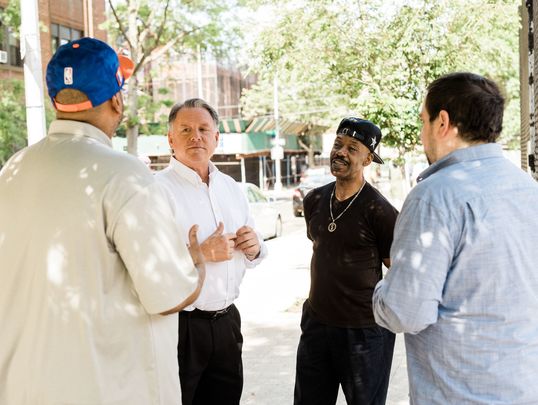 The GOP challenger John Cummings talks to the Irish Voice about his Irishness and how he hopes to unseat one of the most famous pols in the country.

Alexandria Ocasio-Cortez is a progressive leader, one of the most admired – and disliked – politicians in the U.S.  Can she be unseated after one dynamic term in Congress?  It would be a shock, but her GOP opponent John Cummings tells the Irish Voice that he’s ready for the challenge.

Just over two years ago, an unknown progressive community organizer named Alexandria Ocasio-Cortez pounded the streets of New York’s 14th congressional district, which includes parts of Queens and the Bronx, and pulled off a stunning primary victory over longtime incumbent Joe Crowley, one of Irish America’s staunchest allies in Congress.

She’s known nationwide now simply as AOC, a Democratic Party superstar with millions of social media fans who has shaken her party’s status quo and is leading the fight for a Green New Deal and other initiatives that electrify her supporters but disgust her detractors.

Her fame is huge, her fundraising prodigious – she’s raised more than $12 million since her election – but none of that matters to her GOP challenger John Cummings who, like Ocasio-Cortez two years ago, is running for office for the first time.

If she could claim a scalp the size of Crowley’s, Cummings reckons, why can’t he be the AOC slayer?

“She’s done a great job of establishing a national persona for herself, but she’s left the district behind,” Cummings, 60, told the Irish Voice during a recent interview. 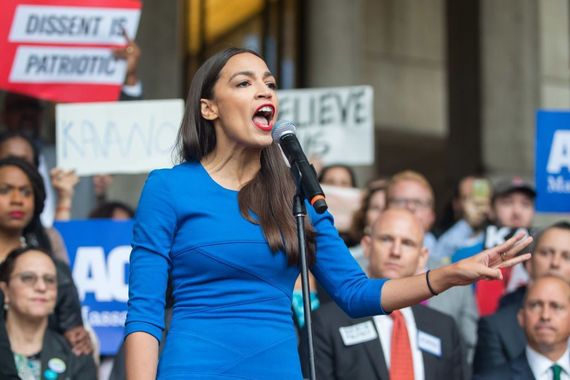 Bronx-born and raised, and the father of two grown sons, Cummings is a former NYPD cop and current high school history and government teacher at his alma mater, St. Raymond High School for Boys.  His students, he says, inspired his foray into politics, something he had mulled while Crowley was in Congress but passed on because he thought such a long-time, prominent politician was pretty much unbeatable.  Ocasio-Cortez’s march to Capitol Hill, however, proved that there’s no such thing as a safe seat.

“My students have been after me for years to run,” says Cummings.  “After AOC’s win, they told me I had no excuse.

“Only 30,000 voted in the primary where she beat him.  But we are not blind to the fact that this is a difficult race in a heavily Democratic district.  The one point I’ve been making since the beginning, and we’ve been at this for more than a year now, is that the district might be Democrat, but it is not socialist which is what she is.  I have much more in common with the voters than AOC does.”

Cummings has done extensive genealogical research – “long before Ancestry.com,” he says – and some of it remains murky.  His great great grandfather and a twin sister made their way to Brooklyn in 1850, but where they came from is uncertain.

One thing he’s sure of is his paternal grandmother, Mary Power, who emigrated from NewtownSandes (Moyvane), Co. Kerry in 1921 at the age of 16.   She ended up being a single mother raising three children – Cummings’ father and two younger sisters – during the Great Depression. 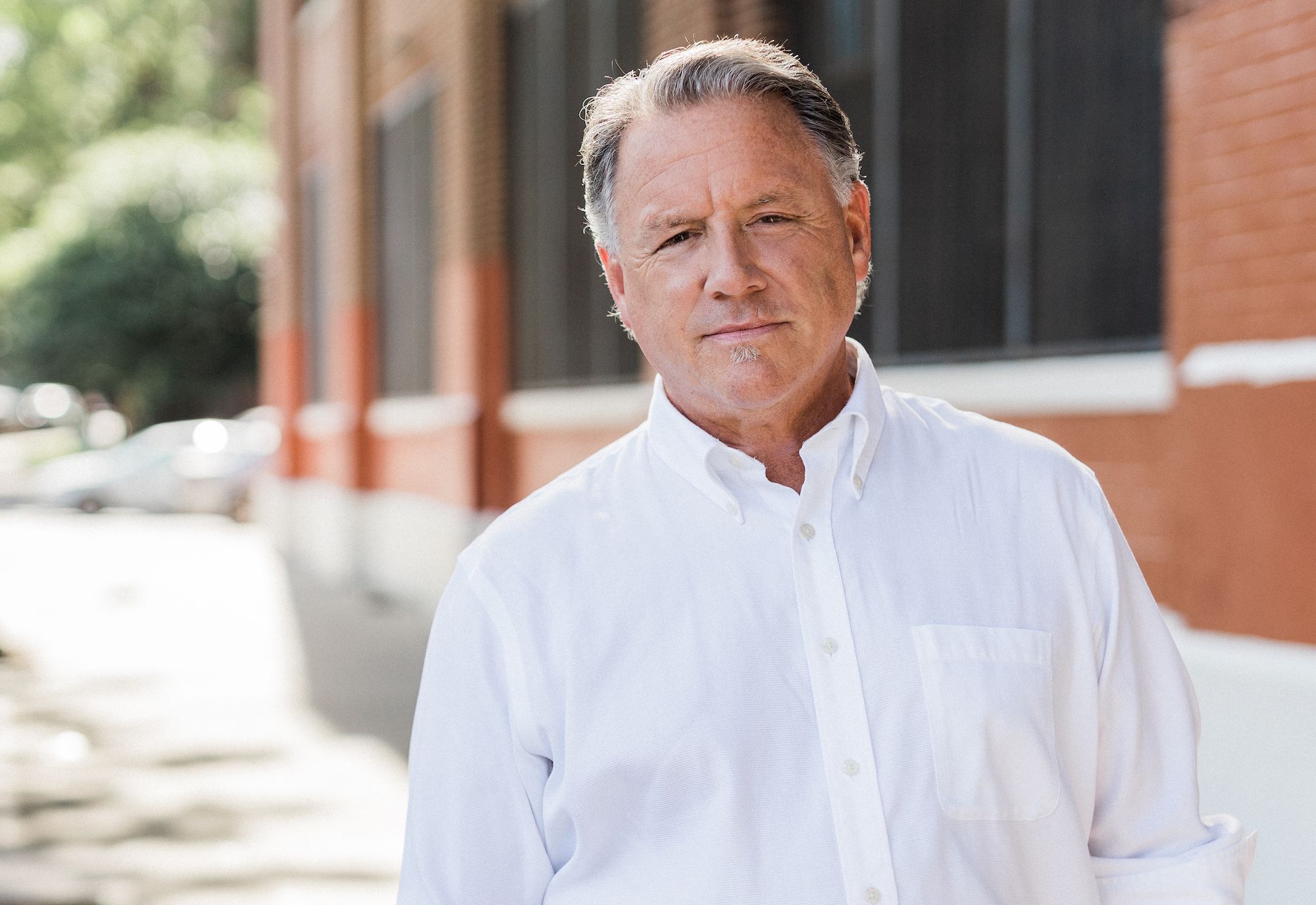 “My grandfather basically disappeared.  She was a huge influence on us, a really great woman.  We were very aware of our Irish heritage because of her.  St. Patrick’s Day was always big in our house. We would watch the parade coverage on TV with Jack McCarthy and waited for the Kerry contingent to march by.”

Cummings’ father Charles was a member of the NYPD and his son took the same path, joining the force in 1983 and stationed in the Bronx before a knee injury forced his retirement eight years later.  Afterward, he completed his undergrad degree at Fordham University, and in 1989 he started teaching at his old school, St. Raymond’s, where he’s happily been ever since.

The sudden end to his NYPD career was sad, “but God had different plans for me,” Cummings says.  “I ended up going back to school and I got into broadcasting too. I work with Fairfield University in Connecticut; I call all the women’s basketball games and some of the men’s.  I used to do all the games on the road and at home and I’ve traveled with the teams all over the country.” 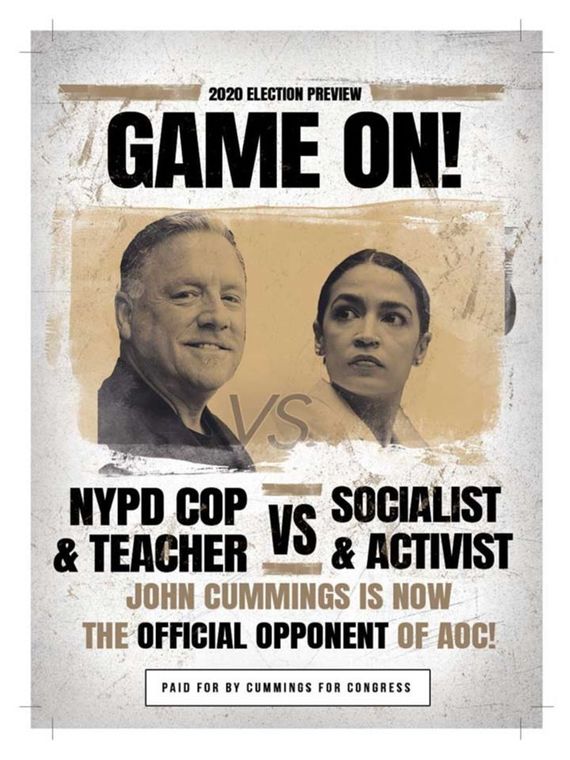 A poster from the Cummings campaign after he emerged from the GOP primary in June.

Being home in the Bronx is where it’s at for Cummings, who also sings and plays the spoons with a local classic rock band.  (“I can play a few Irish reels with the spoons – it’s paid for some drinks on St. Patrick’s Day,” he laughs.)  He’s never lived anywhere else – he’s now resident in City Island – and never wants to, unless Washington, D.C. beckons after Election Day.

What’s the game plan for unseating AOC, one of the most talked-about politicians in America?   Giving a powerful voice to the district’s working-class constituents who, Cummings says, are far more concerned about their small businesses and maintaining their current health care than her initiatives like Medicare for All.

“These are hard-working people who own their own homes and their businesses.  They are union people who like their health care plans, and they like their 401Ks.  She doesn’t want anyone to have any of that.  Instead, she wants socialized medicine,” Cummings says.

“There are people who make this district out to be the hood, and believe me, it’s not.  It’s solidly working class and people have pride in homeownership, and pride in owning a small business.”

Keeping the district safe and secure cannot be done by defunding the police, says Cummings.  Given his background, it’s not surprising that he’s firmly against taking money away from the NYPD.  The day before the PBA headed by Pat Lynch endorsed President Trump’s re-election campaign, the police union did the same for Cummings.  (He also has the endorsement of the retiring GOP representative from Long Island, Peter King.)

“AOC and her radical allies are calling for defunding the police department while New Yorkers are being shot and killed in the streets.  In this race, the choice is clear: John Cummings.  He understands what it takes to reclaim our streets from chaos and violence,” Lynch said.

If the streets aren’t safe then lawlessness will take over, and no one wants a return to the bad old days of the Bronx Is Burning, Cummings says.  “AOC doesn’t think the NYPD was defunded enough,” he adds.

“She grew up in the suburbs (Yorktown Heights) and not in the Bronx like I did. I don’t think she understands what it was like here when the murder rate was over 2,000 a year. When she came back to the Bronx – and I don’t begrudge her parents moving to the suburbs – New York was the safest big city in the world which allowed her to safely go to work in Manhattan every night.  You can’t do that now.  We need our police.”

The Cummings campaign plans on asking Ocasio-Cortez to debate.  “Whether she accepts or not I don’t know, but it’s not a good look if you don’t debate,” he says.

“There are huge contrasts between us. We see things differently but I have no intention of making this race personal.  I did meet her once and she was pleasant.  I don’t think anything gets achieved with personal attacks. There’s way too much of that in politics and I have no time for it.”

Though he’s a Republican and supports President Trump, Cummings isn’t a fan of the messaging on Covid-19 and feels the pandemic’s toll – both on human life and the economy – could have been less severe if the state and federal government worked more closely in tandem.

“It’s what people are looking for in government – consistency. And we didn’t get it. Especially with mask-wearing.  And then Governor Cuomo moving sick people into nursing homes was catastrophic too,” he adds.

The economy under Trump was by and large working for residents of the 14th District, says Cummings, before the coronavirus put so much of it on pause.

“We were heading in the right direction economically and we felt that here in the district.  The unemployment rate was historically low and property values were up. Everyone was working,” the candidate says.

“When I was an officer in the 1980s the unemployment rate was almost 30 percent.  Before COVID it was around four percent. I don’t see eye to eye with the president on everything but you can’t deny that the economy was booming.”

Cummings has raised an impressive $4 million to fund his longshot campaign.  “AOC has tons of money but we’ve raised a lot for a Republican running a race in a Democratic district.  I’m also not blind to the fact that I raised some of the funds because people have very strong opinions about her,” he feels.

Getting his message to the voters during a pandemic, Cummings acknowledges, has presented challenges.  Pressing the flesh at events and kissing babies won’t be happening any time soon, but he is hopeful that he’ll be able to better connect with constituents once school starts next month.

“Hopefully then we’ll have a bit more normalcy.  We haven’t been able to have any community meetings in person or things like that, but I’ll be getting out and meeting people at schools and subway stops,” he says.

Is a life of public service as a school teacher and a police officer the perfect resume for a new career in politics?  Without a doubt, says Cummings.

“I am not a career politician. I’m a regular guy who knows this district inside out. Crime, education, those are my issues, and they are the issues that matter to the people of the 14th District too.”