The day I was arrested with John Lewis

Former US Representative Joe Crowley reflects on the time he got into some "good trouble" arm in arm with John Lewis in Washington, DC in 2013. 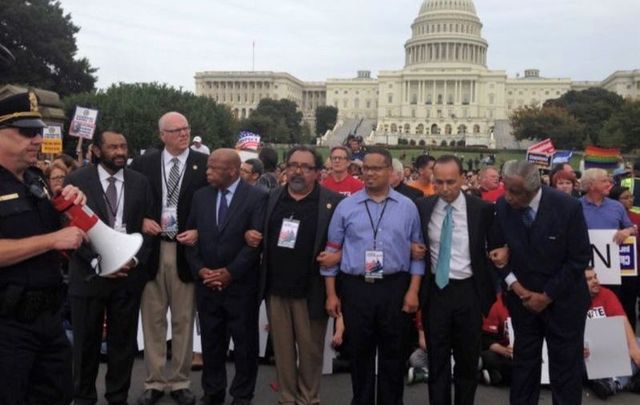 Joe Crowley (third from left) and John Lewis arm in arm on October 8th, 2013 in Washington, DC for the Camino Americano: March for Dignity and Respect. Courtesy of Joe Crowley

Civil rights leader John Lewis, who passed away on July 17, served as Representative for Georgia's 5th congressional district from 1987 until his death.

Editor's Note: The following was written for IrishCentral by Irish American Joe Crowley, who served as US Representative from New York's 14th congressional district from 1999 to 2019.

October 8th, 2013. The first and only time I have been arrested in my life.

In September of that year, l and a number of Members of the House Democratic Caucus were frustrated by the Administration’s deportation policies. Mind you, this was the Obama Administration and not the Trump Administration’s immigration policies. Congressman Luis Gutierrez was the point person on this issue. I was his big “Irish Partner.” Luis and I had been agitating for immigration reform since I had arrived in Congress in 1999. We were frustrated, after failed attempts to bring meaningful and compassionate reform, we needed to take more drastic steps to bring more attention to this issue.

We conferred with others, including Congressman John Lewis, about our next steps. John believed that the only way to garner the attention of the White House was if several of us would be willing to march, protest, and refuse to move. Even if that meant that we were to be arrested. We coordinated this protest with a number of outside organizations including the National Council of La Raza and organized labor. It was called the "Camino Americano: March for Dignity and Respect.” On that day, I marched arm in arm with John Lewis.

I was raised in a “police” family. Like my grandfather before him, my dad was a New York City police officer. After going to law school, he was promoted to detective. He retired after 22 years in the Department. For most of my childhood, I debated pursuing one of two professions: joining the police force, like my father, or becoming a priest, like my uncle. Ultimately, I decided to follow my uncle’s profession. Not the uncle that was a priest, but the other one that was a politician.

I had, and continue, to have respect for the men and women who serve as officers. Growing up in that environment was a great deterrent for getting into “trouble.” Still, I was raised in a family where we could also recognize social injustice. It was why my father went to law school. He saw first hand some of the injustice in the system but had faith in the law as a way to change that. It also helped that my family was steeped in The Troubles, and respected the need for the Irish people to protest and resist in order to break from British rule in Northern Ireland.

My mother and her people are from South Armagh. I read of the peaceful marches of 1968. A mirror of what was happening here during the Civil Rights movement. The Nationalist community in the North identified with Martin Luther King, John Lewis, and their dedication to non-violence. People like John Hume, Bernadette Devlin McAliskey, and others saw their example as a way forward in Ireland. I knew of the suppression of that movement in Ireland as well. Again, a mirror of the “Bull Connor’s” of the American South.

So, on that autumn day in 2013, after marching to the base of the Capitol on the Washington Mall, my colleagues and I were ordered to disperse or face arrest. We did not disperse. We were arrested. In total, around 200 people were arrested, including myself along with Luis Gutierrez (D-Illinois), Keith Ellison (D-Minnesota), Raul Grijalva (D-Arizona), Al Green (D-Texas), Jan Schakowsky (D-Illinois ), Charlie Rangel (D-New York), and John Lewis (D-Georgia). It was my first arrest, but for John Lewis, it was his 45th!

This was Washington in 2013. Not Selma in 1963. Not Derry in 1968. We were not facing down rubber bullets, or tear gas, or water cannons, or dogs. However, I knew the significance of what I was doing. I was being arrested for protesting. I was getting into “good trouble” with my friend John Lewis.

56 years ago today I was released from Parchman Penitentiary after being arrested in Jackson, MS for using a "white" restroom. #goodtrouble pic.twitter.com/Y6UeilFa5u

It was the first time I had ever been handcuffed and put into a police van. I had never experienced anything like it. It was surreal in many ways. I was a bit unsure of what was to happen, so I nervously turned to John Lewis and said jokingly, “What are you doing time for?”

John looked at me with a great grin and said, “You will look back on this as one of your finest days.” He was, of course, right. As I write this today, and until my last day, it will always be one of my proudest moments during my public service tenure. 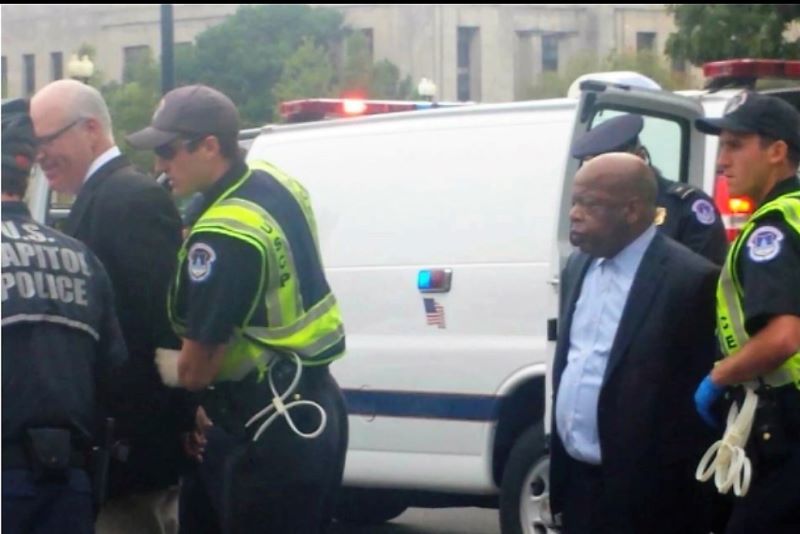 Joe Crowley and John Lewis under arrest on October 8, 2013. (Courtesy of Joe Crowley

After being “booked” and processed we paid a fine and we were released. The Obama Administration would later issue Executive Orders to protect from deportation the children of undocumented parents who were brought to the United States as minors as well as their parents. I believe our actions helped lead to these Executive Orders.

As I think about John’s passing, I am grateful for knowing such an incredible man. I want to thank him for being the moral leader he was. Thank him for demonstrating his dedication to peaceful, non-violent protest consistently throughout his entire life. Thank him for instilling in me that real change can only be made by taking action. Thank him for teaching all of us that there is good cause for getting into “good trouble.” Thank him for being my friend.

I never missed a chance, while in his presence, to say, “I love you, John.”

On my last day on the House Floor after my loss, John put his hand out to me and pulled me to his chest. We said nothing but embraced for what seemed like an eternity but was only a moment. I kissed him on his beautiful, bald head and once again told him, “I love you, John.” He looked up at me and said, “I love you too, brother Joe.”

Rest in Peace and Power, John.