Calls for Trump to resign over US COVID mishandling

Donald Trump admitted to downplaying the threat of the pandemic in an interview with veteran journalist Bob Woodward. 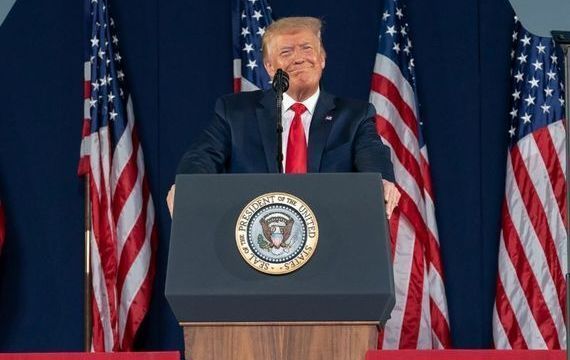 Donald Trump admitted that he downplayed the threat of the virus, prompting criticism from Irish-American politicians. White House Flickr/Public Domain

US President Donald Trump admitted to downplaying the threat of the coronavirus pandemic in audio clips recorded earlier this year, prompting a wave of fury among several prominent Irish-American politicians, with some even calling for his resignation.

President Donald J. Trump told veteran journalist Bob Woodward that he always wanted to play the virus down to avoid creating panic in an interview on March 19 for Woodward's new book "Rage".

CNN has released a preview of the book, which is due to be released next week, including audio recordings of the US President, provoking an angry reaction among Irish-American politicians.

Democratic nominee Joe Biden accused the President of betraying the American people and said that the comments were an "unjustifiable dereliction of duty."

Biden also released a video on Twitter claiming that Donald Trump knew the virus was deadly at the same time that he was telling Americans that it was nothing to worry about.

The video appeared to blame Trump for America's coronavirus death toll rising to more than 195,000 and for crushing the US economy.

Biden's video also includes some dialogue from the interviews recorded on Feb. 7 and March 19.

"It's also more deadly than even your strenuous flus. This is deadly stuff," Trump said on Feb. 7 at a time when the US President assured the American people that the virus would simply go away. He also openly mocked people for wearing masks at the time despite also admitting in the interview that the virus "goes through the air."

Biden's video also includes audio recordings of Trump claiming that he "always wanted to play it down" and "still likes playing it down" in an interview from March 19.

Donald Trump knew that COVID-19 was dangerous. He knew it was deadly. And he purposely downplayed it.

"It's disgusting," Biden told CNN. "Think about what he did not do."

Other politicians went even further than Biden, calling for Trump to resign over the incident.

Massachusetts Senator Ed Markey, who recently defeated Joe Kennedy IIi in the state's Democratic primaries, claimed that Trump was personally responsible for killing countless Americans. He accused the President of lying about the dangers of the virus for months and said that defeating him in November was a matter of life and death.

Donald Trump is personally responsible for killing countless Americans. He lied about the dangers of the coronavirus for months, despite admitting on tape that he knew it was a highly contagious and deadly disease. Defeating him in November is a matter of life and death.

In a separate tweet, Markey said that Trump should resign from office.

House Speaker Nancy Pelosi also attacked the President on Twitter, claiming that Trump hid the facts and refused to take the threat of the pandemic seriously for months.

"Trump was fully aware of the catastrophic nature of the coronavirus but hid the facts and refused to take the threat seriously, leaving our entire country exposed and unprepared," Pelosi wrote.

The President’s own words spell out the devastating truth: Trump was fully aware of the catastrophic nature of the coronavirus but hid the facts and refused to take the threat seriously, leaving our entire country exposed and unprepared. #TrumpKnew https://t.co/WSq1jbL188 pic.twitter.com/YjYiRaC8Qy

Trump himself addressed the emergence of the audio recordings and claimed that Woodward's book was a "political hit job."

Speaking at a White House press conference, Trump said that he only downplayed the threat of the virus to avoid creating a frenzy.

"I'm not going to drive this country or the world into a frenzy. We have to show leadership and the last thing you want to do is create a panic."

Dr. Anthony Fauci also defended the President, saying that Trump was trying to prevent the Americans from getting "down and out" over the virus.

"I don't recall anything that was any gross distortion in things that I spoke to him about," Fauci said.

Trump also pointed to his decision to ban flights from China in the early days of the pandemic despite political opposition and his later to ban flights from Europe, where the virus was beginning to spiral out of control, as proof of his tough stance against the virus.

However, he has also frequently dismissed the threat of the pandemic and called for an early reopening of the US economy.