Niall O'Dowd argues that now is the time for Joe Biden "to climb in the ring" in the fight against Donald Trump. 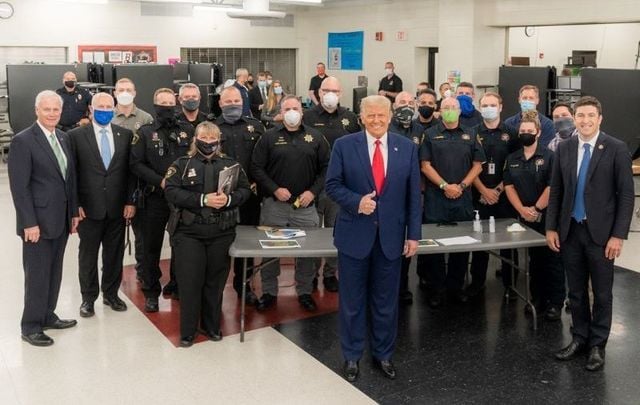 Joe Biden needs to hit the highway like a demon roadrunner to counter the madness of Donald Trump, who will lead America into a race war if not stopped. Kenosha on Thursday is a good start.

It has certainly become obvious what Trump is up to. He is attempting to ignite a race war in order to win re-election. A flood of polls on Wednesday showed Biden on average ahead by eight points or so-but remember Clinton in 2016. Biden can not rest.

If Trump is not defeated in November, America will take a huge step backward with likely disastrous consequences. Anti-black and anti-immigrant forces will be unleashed with profound repercussions for the country.

There seems no doubt this is the way Trump is headed. The signals are clear. His frenzied Twitter accusations have begun to prepare the way for a bloody conflict on our streets with disastrous results for our country.

Also, by relentlessly focusing on law and order, he is gambling that people will forget Covid-19 and the dire economy. Throw in a rushed vaccine which Trump is clearly intending and you realize Trump will risk sickening his own people to win.

On the violence front the war cry has gone out. The caravan of Trump supporters who descended on Portland last weekend, with many among them seeking out violence, is merely a taste of what Trump can unleash from coast to coast.

Trump’s storm troopers will gladly follow the winks and nods from this most dangerous of presidents.

Everyone knows the race card is being played, leading to a very dangerous and volatile situation. America is deeply divided and we are in dire need of a healer, but instead, we have a hellion who gleefully predicts war.

His behavior these past few days, cloaking his racism in law and order language, sympathizing with a white man killed in riots but not a black man blasted apart by seven bullets, is all we need to see to know where this is heading.

...TODAY, I will be sending federal law enforcement and the National Guard to Kenosha, WI to restore LAW and ORDER!

Indeed, his former campaign manager Kellyanne Conway gave the game away when stating on Fox & Friends that the more violence there was, the better Trump’s chances of re-election. What a cold-blooded calculation.

Trump is like the arsonist who lights the fire and then shows up to put it out. But the flames of racial animosity are very hard to quench and can quickly lead to chaos.

It is clear there is a master plan. Trump wants us to ignore the coronavirus disaster and the economy, and instead let him frighten the living daylights out of impressionable voters.

We know enough about his powers of persuasion and his extraordinary ability to hammer home the Big Lie to know he may well succeed.

Biden is the only one who can stop this by winning the election on November 3. He enters the Labor Day traditional kick-off six to eight points ahead on average.

But that will not be enough given Trump’s clear fascist intention of refusing to give up power and accepting only the result that sees him win. He is seeking to become a tinpot dictator with rigged voting, and a race war with street violence all happening at the same time.

He must be stopped. Biden has successfully carried off a bunker strategy, keeping the spotlight on Trump and his outrageous behavior.

But now it is time to climb in the ring. Every lie, every goading for violence, every attempt to ignore the pandemic and collapsing economy must be met with the truth, plain and simple.

Biden must prepare for his debates like his life and his country depend on him winning them. He must make clear that violence on both sides is unacceptable, that he will be a healer, not a divider, that he will properly tackle the virus and the economy, and he must stress the dire consequences of a second Trump win.

The country is depending on the Irish American former vice president like never before.

Read More: Joe Biden, with an assist from Seamus Heaney, crushes it with his acceptance speech