The current ban on abortion in Northern Ireland will remain in place. 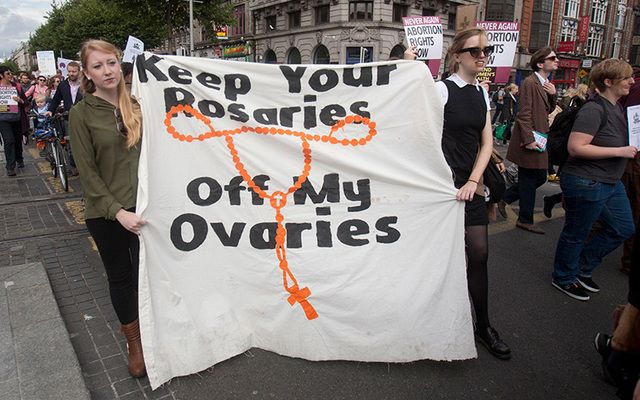 Members of the public at a rally in 2014 in favour of repealing the 8th Amendment to the Irish Constitution in favour of a more liberal law on a womans right to abortion facilities in Ireland. RollingNews.ie

Women and transmen from Northern Ireland will be entitled to free abortions in England from now on, the British Government has declared.

The announcement came after more than one hundred MPs (legislators), including a number of Conservatives, indicated that they were prepared to back an opposition amendment in Parliament calling for the change.

The Government quickly signaled a retreat on the issue in order to avoid an embarrassing defeat.

Labour MP Stella Creasey, the politician behind the amendment said, “If a Northern Irish woman comes to London and requires an appendectomy, she is given one on the NHS [National Health Service] free of charge; but if she needs an abortion, she has to pay.”

Healthcare in the United Kingdom has been almost entirely “free at the point of need” for nearly 70 years and abortion was legalized in England, Scotland and Wales in 1967.

At present in Northern Ireland, a doctor may perform an abortion "only to save the life of the mother" or if the woman’s health is deemed at risk. The law is enforced and prosecutions have been brought against those caught taking abortion pills.

Most who seek terminations do so in England where they are charged close to $1,200.

In 2015, the High Court ruled Northern Ireland's abortion ban breaches human rights, on appeal today now says it is up to Stormont to decide

At the time, the issue of abortion was devolved to the unionist-dominated Parliament of Northern Ireland and legislators opted not to bring the law into line with the rest of the United Kingdom.

A motion last year in the Northern Ireland Assembly to legalize abortion in the event of fatal foetal abnormalities was defeated by 59 votes to 40.

The Democratic Unionist Party, which won a majority of Northern Irish seats in this month’s election and whose MPs Theresa May’s Government relies on to survive, is a strongly pro-life party.

A concession on abortion underlines the Conservative government's vulnerability to political ambush in Parliament https://t.co/s4DegDS9Gi

Following the announcement, the party released a statement stating its opposition to the amendment but added that, “requesting payment from Northern Ireland women, whilst they access termination services, was always a matter for NHS England.”

It furthered added that “besides the DUP, it should be noted that Sinn Fein [sic], the UUP and Labour’s sister party the SDLP have opposed the extension of the 1967 Abortion Act to Northern Ireland.”

The charity Life, which campaigns against abortion in Northern Ireland, was blunt and said that the new arrangement, “shows an abject disdain for Parliament, by seeking to bring this change in via the back door, avoiding full debate on this issue.”

Sisters in Northern Ireland we will hear your voices - have asked for speedy meeting with govt to make this a reality! #MyPledgeherChoice https://t.co/WQbITjshy5

Barbara Davidson of the London Irish Abortions Rights Campaign, however, stated, “This is a significant and welcome milestone on the road to safe and legal abortion for all women in Northern Ireland and an acknowledgment that Westminster has finally heard our calls for reform.”

An estimated 700 residents from Northern Ireland are thought to have traveled to England for terminations last year.