In a dramatic u-turn the British Government has announced it will seek to align the UK with EU regulations in a number of areas after the Democratic Unionist Party rejected its proposal for special status for Northern Ireland. 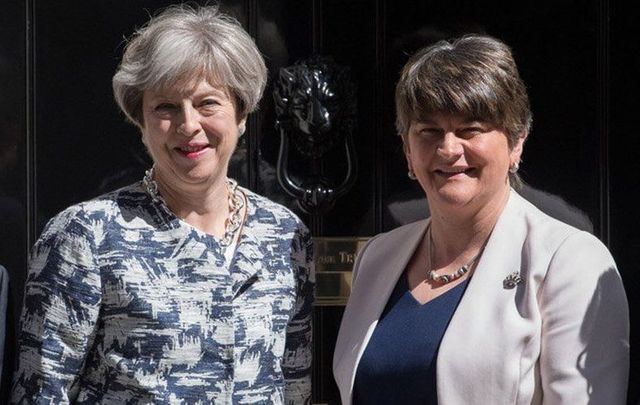 Theresa May and Arlene Foster outside No 10 Downing Street Rollingnews.ie

In a dramatic u-turn the British Government has announced it will seek to align the UK with EU regulations in a number of areas after the Democratic Unionist Party rejected its proposal for special status for Northern Ireland.

The British and Irish Governments over the weekend agreed to keep “regulatory alignment” between Northern Ireland and the EU after the United Kingdom leaves the bloc in 2019. The result would mean the six counties having to copy rules decided in Brussels relating to certain issues like agriculture and energy but would mean no hard border between the north and south.

However, the plan was immediately shot down by the DUP whose 10 legislators are key to keeping the Conservatives in power in Westminister.

Read More: Unionist fury over Brexit deal said to be agreed by Irish and British government

Speaking at Stormont, DUP leader Arlene Foster was unequivocal in her opposition to the proposal: "We have been very clear. Northern Ireland must leave the EU on the same terms as the rest of the United Kingdom. We will not accept any form of regulatory divergence which separates Northern Ireland economically or politically from the rest of the United Kingdom.”

Now the British Government has seemingly resigned itself to the whole of the United Kingdom aligning itself with EU law in certain areas in order to placate its DUP allies and move the negotiations on to trade.

Brexit Secretary David David told the House of Commons that legal alignment on certain matters was always to apply to whole of the UK: “The presumption of the discussion was that everything we talked about applied to the whole United Kingdom. Alignment isn’t harmonization, it isn’t having exactly the same rules, it is sometimes having mutually recognised rules, mutually recognised inspection – that is what we are aiming at.”

Staying in the Single Market + Customs Union would ensure no hard border while protecting our economy and the integrity of our Union. But instead the Brexit Secretary ducks the issue with vague talk of "regulatory alignment" without being able to explain what it means. pic.twitter.com/K3Z8XdH0ri

However the DUP’s Westminster leader, Nigel Dodds, made clear afterwards that wasn’t how his party had seen it yesterday when they first saw the proposal.

“Upon immediate receipt of that text we indicated to senior government representatives that it was clearly unacceptable in its current form,” he told journalists after Davis’ statement.

.@NigelDoddsDUP "one of the good things that came out of yesterday - from all sides there is now an agreement that the UK stands together pic.twitter.com/4k9z0XrISP

Sir Keir Starmer, the opposition Labour Party’s Brexit spokesman, said the announcement was an “embarrassment” and said in reference to the Tory-DUP alliance,  “It gives a whole new meaning to the phrase coalition of chaos”.

In Dublin, Taoiseach (Prime Minister) Leo Varadkar told the Dáil that he still thought there was time to get an agreement on the border issue this month.

And he was keen to dismiss unionist accusations that the Republic was trying to unite Ireland by stealth.

Taoiseach Varadkar has said the ball is in London's court. Image: RollingNews.ie.

“We have no hidden agenda,’’ he continued. “We respect the constitutional status of Northern Ireland which says that it is part of the United Kingdom until a majority of people in Northern Ireland say otherwise.’’

The shift in policy will be likely see May’s increasingly fractious Conservative Party engage in another public spat about the direction of Brexit.

"While I recognise the complexity of the current negotiations,” her statement read, “no government of the Conservative and Unionist Party should countenance any deal that compromises the political, economic or constitutional integrity of the United Kingdom. If regulatory alignment in a number of specific areas is the requirement for a frictionless border, then the Prime Minister should conclude this must be on a UK-wide basis.”

However, arch-Brexiteer Jacob Rees Mogg was cool to the idea: “I think that if we are to make a success of Brexit, indeed, if we are to have Brexit at all, we’ve got to make sure that we are free to conduct our own trade arrangements the way that we want to. And if we maintain regulatory alignment with the European Union then that makes it extremely difficult if not impossible.”

Britain don't seem to have a clue what they're doing, so what's your suggestion? How can the Northern Ireland border conflict be ended in the fairest and most beneficial way? Let us know your thoughts in the comments section below.