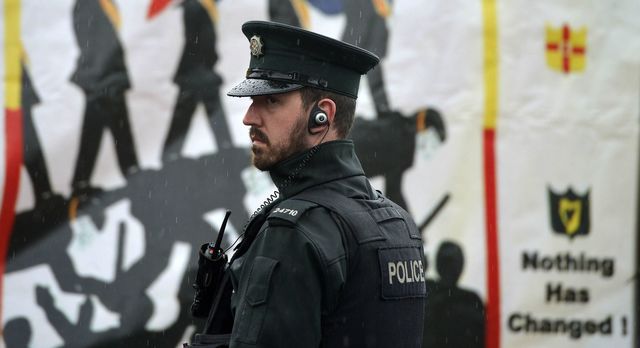 PSNI officer Northern Ireland - sharp increase in terrorist attacks in the past week, thought to be due to looming no-deal Brexit Getty

Chief Constable of the Police Service of Northern Ireland, Simon Byrne, has warned that the return of a hard border between Northern Ireland and the Republic, in the event of a no-deal Brexit.

Since last year the number of attacks and incidents, suspected to have been carried out by paramilitaries in Northern Ireland, has vastly increased.

The Police Chief said a hard border no-deal Brexit could become a "trigger and fueling point" for more people to join extremist groups. Byrne' comments came the day after a "paramilitary-style" shooting took place in Belfast and two men were arrested over an attempted bomb attack on PSNI officers in Fermanagh. Also on Monday night, a man in his 50s with loyalist links was murdered in his car.

Byrne told the BBC Radio 4 Today program “If we get [the Brexit deadline] wrong we could drift back to almost a paramilitary style of policing.”

He also commented on the political vacuum in Northern Ireland where the power-sharing government at Stormont collapsed in Jan 2017.  Byrne said this has led to an increase in uncertainty and has become a "breeding ground for dissident hate”.

Byrne also expressed his concerns over the “tempo and pace” of recent dissident republican attacks.

On Wednesday evening a man in his 40s was shot in both legs in what PSNI are calling "paramilitary-style” shooting. The attack took place in the Ardoyne, a mainly Catholic and Irish nationalist district in north Belfast. The victim is being treated in hospital. His condition is described as stable.

“The community does not support such actions and it needs to stop. There is no place for guns on our streets.

People Before Profit councilor Fiona Ferguson said: "Those who wield the 'punishment' guns in our area do not wield the support of the community."

Loyalist murdered in Down

On Monday evening Malcolm McKeown (54), a career criminal with loyalist paramilitary links was shot six times, in broad daylight, while sitting in his BMW, at a service station in Waringstown, County Down.

A 30-year-old man has been arrested on suspicion of the murder of Malcolm McKeown, who was shot dead on Monday nighthttps://t.co/apc33StNaz pic.twitter.com/cTarZERaIV

Police detectives are investigating the murder and have arrested two men, aged 28 and 30. These men have since been released from custody.

Detective Chief Inspector Pete Montgomery told i Armagh “To subject two teenage boys to witness and come across a body which has been shot six times is unthinkable.”

Also on Monday, in a separate incident, police officers escaped major injuring having been "lured" into an area where a bomb exploded, in County Fermanagh, close to the border with Ireland.

There were no casualties.

TheJournal.ie reports that the Gardai (Irish police) and  PSNI have been working together to solve the recent crimes. They believe the Fermanagh attack was carried out by a "splinter of a splinter of a splinter group", part of the Continuity IRA or the New IRA. They do however agree that this small group has the capacity to cause serious harm.

Byrne told the BBC that a previously dormant dissident republican group, the Continuity IRA, had come back to the fore and "are clearly intent on murdering one of my officers”.

Do you believe a no-deal Brexit and hard border could see a return of The Troubles in Northern Ireland? Let us know in the comments section below.