Bomb intended to kill police found near to Fermanagh border 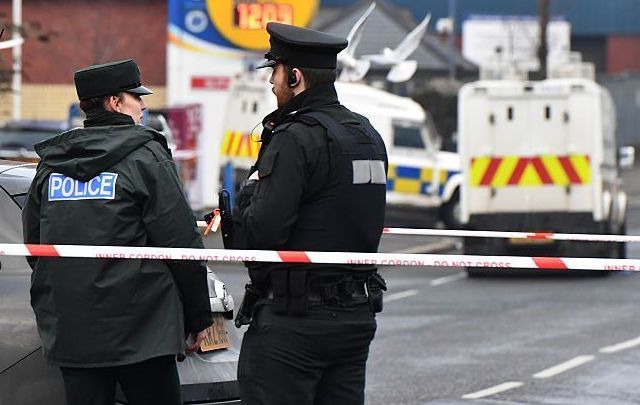 Members of the Police Service of Northern Ireland. Getty

Police in Northern Ireland escaped injury after a bomb was detonated on Monday morning, in the Wattle Bridge, near Newtownbutler, in County Fermanagh, close the UK border with the Republic.

It’s believed that attack was a “deliberate attempt” to lure the police in “to murder them”.

Over the weekend, police had responded to a call over a suspicious device. This was later declared a hoax. Another device exploded closeby on Monday morning at around 10.35am. A bomb disposal team were dispatched to the area to review the scene.

"While this investigation is at a very early stage I am of the firm belief this was a deliberate attempt to lure police and ATO (Ammunition Technical Officers) colleagues into the area to murder them."

He called the act "indiscriminate and reckless" and said, "there is no doubt in my mind that police responding to this call were the target".

The Irish Times reports that given the location of the attack investigators will likely “focus on the possibility the bombers were dissidents republicans who fled south.”

No formal request for cooperation with the Gardai (Republic of Ireland police) has been given.

She said “Thankfully no one was injured in this incident but we could have been dealing with a situation where people were seriously injured or worse.

“Those responsible for this incident have nothing to offer society and need to end these actions immediately. Anyone with information on this should bring it forward to the PSNI.”

Simon Coveney, Ireland’s Tanaiste (Deputy Leader) said any attempt to injure or kill a police officer has no support and no justification ever.

Do you believe this violence has been spurred on by the disturbance being caused by Brexit? Let us know in the comments section below.