Hundreds of people in Northern Ireland were interviewed for the United Kingdom Holocaust Knowledge and Awareness Survey, whose findings were published today. 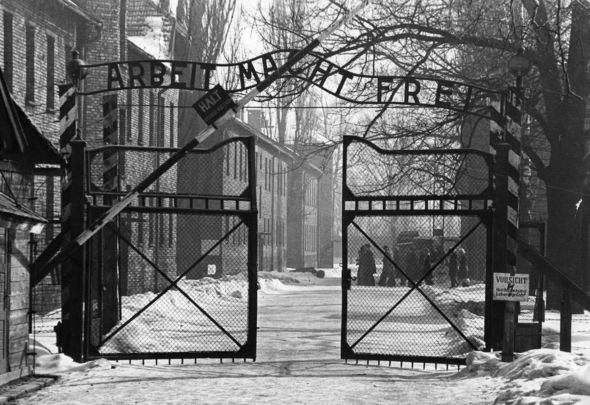 The gates of the Nazi concentration camp at Auschwitz, Poland, circa 1965. The sign above them is 'Arbeit Macht Frei' - 'Work Makes You Free'. Getty Images

61 percent of people surveyed in Northern Ireland believe something like the Holocaust could happen again today, a new study has found.

The findings of the United Kingdom Holocaust Knowledge and Awareness Survey were published today, November 10, coinciding with the anniversary of Kristallnacht in 1938 Germany.

A huge majority - 91 percent - of respondents in Northern Ireland believe it is important to continue to teach about the Holocaust, in part, so it doesn’t happen again.

74 percent of respondents in Northern Ireland believe that at least a few people in the UK think the Holocaust did not happen.

46 percent of Northern Ireland’s respondents said they did not know that six million Jews were killed in the Holocaust.

24 percent of Northern Ireland’s respondents are unable to name a single concentration camp or ghetto.

With six percent, the percentage of Northern Ireland’s respondents who believe the Holocaust is a myth greatly exaggerated is the lowest rate amongst the four UK nations surveyed in the study.

The Conference on Jewish Material Claims Against Germany (Claims Conference), commissioned Schoen Cooperman Research to conduct the study of Holocaust Knowledge and Awareness in the United Kingdom. The study was conducted with adults aged 18 and over in England, Wales, Scotland, and Northern Ireland between September 29 and October 17, 2021.

Announcing the study’s findings, Dublin native Gideon Taylor, President of the Claims Conference, said: “We are very concerned to see the profound gaps in knowledge of the Holocaust in this and in previous studies including about events connected to the U.K.

“Yet, it is very powerful to see the overwhelming majority of U.K. respondents say the Holocaust should be taught in schools.

“Eighty-eight percent believe that it is important to continue to teach the Holocaust, in part, so it does not happen again. This is where we need to focus our energy. Education will not only fill the gaps in Holocaust knowledge, but it will also make for better, more empathetic citizens.”

Overall, the study found that the majority (52 percent) of all respondents did not know that six million Jews were murdered and 22 percent thought that two million or fewer Jews were killed during the Holocaust.

Kristallnacht or “Night of Broken Glass” was the pivotal moment that occurred on November 10, 1938, when Jews across the Third Reich were attacked in a nationwide pogrom and Jewish families knew they had to take the heartbreaking step to get their children out of Europe leading to the “Kindertransport," a desperate effort by British citizens to rescue some 10,000 Jewish children from the horrors of Nazi Germany and certain death.

When asked about the “Kindertransport,” overall 76 percent of respondents did not know what the historic effort was.

Greg Schneider, Claims Conference Executive Vice President said, “It is particularly disappointing to find that the Kindertransport, an important historic chapter, that reflected the best of humanity and should serve of a beacon of hope in the darkest of times, is being forgotten.

“Now more than ever it is critical that we find new and innovative ways to perpetuate the memory of the Holocaust through education. This is imperative, not just for the memory of the six million who were murdered and the survivors still with us, but for the generations to come. Only through understanding our history can we ensure a better future.”