Minister for Justice Helen McEntee said that the proposed laws would go before the Cabinet around Easter. 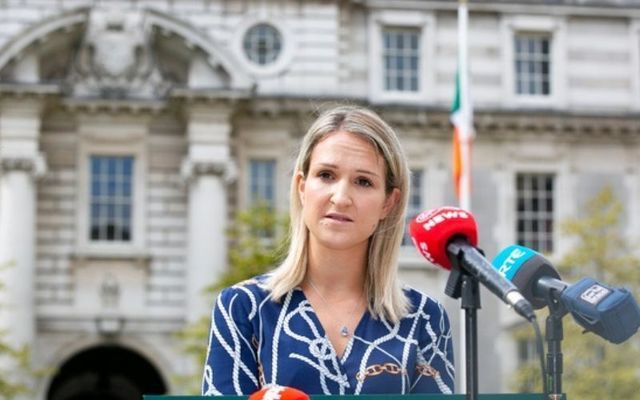 Minister for Justice Helen McEntee made recommendations for a series of laws that would outlaw hate speech on Thursday. Rolling News

Ireland's Minister for Justice has introduced a series of new hate speech laws against online abuse and incitement of hate, while the legislation could potentially make Holocaust denial a criminal offense in Ireland.

Minister for Justice Helen McEntee made a series of recommendations for the enactment of the laws criminalizing the publishing or sharing of hate speech online that incite violence, and the Irish Times reports that Holocaust denial and minimalization could be included in the new laws.

Holocaust denial is already a criminal offense in several European countries, including France and Germany, and the Irish Times reports that the Department of Justice will introduce similar legislation as part of McEntee's proposed laws.

The hate speech laws are set to go before the Irish Cabinet around Easter next year.

The new laws would criminalize the denial of any genocide under Irish law in circumstances where denial provokes hate, not just the Holocaust, according to the Irish Times.

Department of Justice officials did not consider Holocaust or genocide denial during the consultation process for the proposed laws because they did not believe it was a serious issue in Ireland. However, department officials believe that modern hate speech laws should include provisions against genocide denial.

Officials also pointed to a decision by the Council of the European Union, who passed a non-binding framework decision in 2008 calling for the criminalization of genocide denial when it was likely to incite hate or violence.

The European Court of Human Rights has also upheld decisions to introduce laws against genocide denial in other countries in the past, stating that the laws do not infringe upon a person's freedom of speech or expression.

Minister for Justice Helen McEntee said on Thursday that the proposed laws will target people who "intentionally" or "recklessly" incite hatred against certain people or groups and also said that the laws are not about "catching people out" for misspeaking.

She said that criminal offenses will be determined by the perpetrator's intentions, not how the comment was perceived by the victim.

The proposed hate speech laws will include comments about the LGBT community, immigrants, Travellers, ethnic groups, and religious groups.

McEntee was asked whether it would be a criminal offense to misgender a trans person or refer to them by their former name and the Minister for Justice replied by saying that the Government wasn't trying to catch people out.

"We’re not trying to catch people out, this is not something you can stumble into by accident. This is not about somebody causing offense to somebody else or misspeaking.

"What is very clear is we’re talking about an intention or recklessness to incite hatred against one individual or a group of people."

McEntee also said on Twitter that the consultation process for the proposed laws had given the Department of Justice a better understanding of the kind of abuse that some people in Ireland have to deal with.

"The consultation has given us a greater understanding of the lived experience of people and communities in Ireland who have been targeted because of their race, sexuality or even disability.

"Victims of hate crime are made to feel afraid for their own future, and that of their friends, loved ones and children. This type of fear can can lead to a more divided society."

The consultation has given us a greater understanding of the lived experience of people and communities in Ireland who have been targeted because of their race, sexuality or even disability.