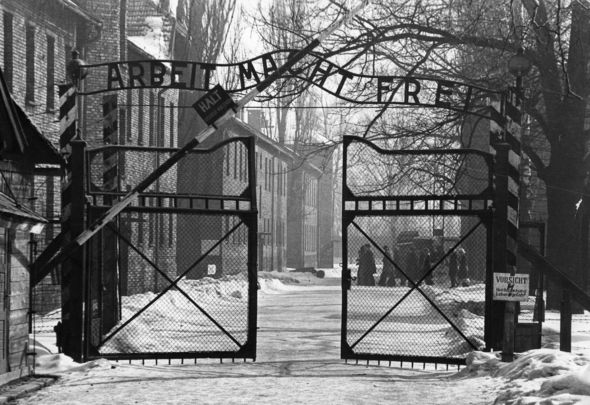 The gates of Auschwitz, a concentration camp operated by Nazi Germany in occupied Poland during World War II “The story of the only Irish citizen to die in Auschwitz.” Getty

Originally from former Czechoslovakia, Ettie Steinberg was the only Irish citizen to die at Auchswithze during World War II's Holocaust. Today, International Holocaust Memorial Day, we retell her story.

Editor's note: International Holocaust Remembrance Day, January 27, 2023, is a commemoration that cherishes the memory of all who perished in the Holocaust. It recalls six million Jewish men, women, and children and millions of others who were persecuted and murdered by the Nazis because of their ethnicity, disability, sexual orientation, political affiliations, or their religious beliefs. Today, we recount one of the few from Ireland who died in the Holocaust, Ettie Steinberg.

A memorial to the only Irish citizen killed in the Holocaust was unveiled in Dublin in 2014. The story is fascinating for many reasons, as chronicled in an article by Conan Kennedy. Kennedy examines the story in-depth and re-examines the lives of Ettie Steinberg and her son Leon who are documented as the only Irish to die in Auschwitz.

Beginning in former Czechoslovakia, Ettie was one of seven children born to Aaron Hirsh Steinberg and Bertha Roth. Sometime during the 1920s the family relocated and settled in Ireland in a small house at, 28 Raymond Terrace, in Dublin. The children all attended St, Catherine’s school, in Donore Avenue.

It is believed that Ettie worked as a seamstress for a time while in Dublin before her marriage. In 2008, her sister Fanny Frankel of Toronto recalled that Ettie had "golden hands" and was an excellent and creative seamstress and that she had treasured a handmade suit her sister had created for her.

Others who knew Ettie said she was a "beautiful girl and tall and slim with wonderful hands". Ettie would marry Vogtjeck Gluck, they were married on 22 July 1937 in the Greenville Hall Synagogue on the South Circular Road in Dublin.

According to Conan Kennedy following their marriage, the young couple moved to Vogtjeck’s family business in Antwerp, setting up home at Steenbokstraat 25.

A year or so later, aware of the gathering dangers for the Low Countries, they moved to France, and their son, Leon, was born in Paris on 28 March 1939.

The family moved south, where they settled. After moving from place to place in France for two years, in 1942 the young family found themselves in a hotel in Toulouse.

At this time, round-ups of Jews were taking place in the south of France with the approval of the Vichy government, a puppet régime of Nazi Germany. Ettie, Vogtjeck, and Leon were discovered and arrested. Ettie’s family in Dublin had succeeded in getting visas for the Gluck family which would allow them to travel to Northern Ireland. When the visas arrived in Toulouse, however, it was too late. Ettie, Vogtjeck, and Leon had been arrested the previous day.

On the journey that followed, Ettie wrote a final postcard to her family in Ireland and managed to throw it out of the train window. Extraordinarily, a passer-by found it and posted it.

The postcard found its way to Dublin. It was coded with Hebrew terms and read:
Uncle Lechem, we did not find, but we found Uncle Tisha B’av.

Ettie’s family understood her tragic message very well:‘Lechem’ is the Hebrew word for bread and "Tisha B’Av" is a Jewish fast day commemorating the destruction of the temple. The Steinberg family tried desperately to find out what had become of their daughter, writing to the Red Cross and even the Vatican.

Now living in Israel, Freda Steinberg (wife of Ettie’s late brother Solomon) recalled in 2008, “In August 1947 Solly and I were in a kosher restaurant in Prague, where we met many survivors. One of them told us that they had escaped from Antwerp together with Ettie and family and made their difficult way to the south of France, where they slept in different houses most nights."

There was a period of relative quiet at one time and so Ettie decided that she would stay where they were. Unfortunately, she didn’t take the advice of their friends and that was the night when she, her husband and child were taken.

The family was taken to Drancy, a transit camp outside Paris.

Freda Steinberg continues, “Solly went to Yad Vashem to see if the Gluck name appeared in any records and, sure enough, details were given of the date they were sent to Auschwitz, the number of the train, which carriage, and the time it left France –true German thoroughness."

The Glucks were deported from Drancy on 2 September 1942 at 8.55am and arrived in Auschwitz on 4 September. One could assume that they were put to death immediately.

He was to become a professor at the Technion in Haifa. The family connections of Ettie Steinberg are thus spread widely around the world, mirroring in many ways the similar emigration of the general Irish population of the time.

A memorial to Ettie Steinberg was unveiled at a secondary school in Malahide, Co Dublin in March. The stone memorial was a way for the school to create a permanent Holocaust memorial to honor Ireland's only victim of the Holocaust.