Stormont was recalled from its summer recess on Tuesday to tell the British government that they will not accept plans to end prosecutions for Troubles crimes. 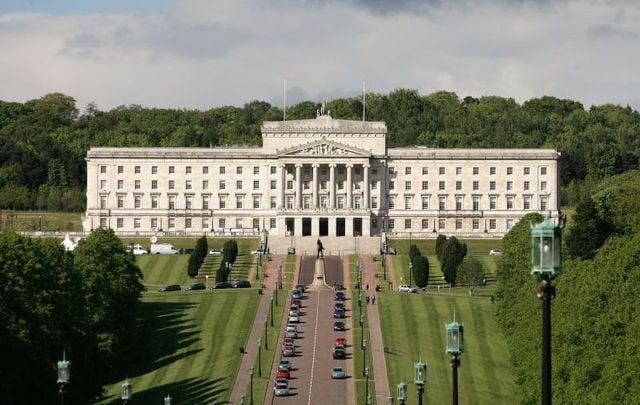 Stormont Estate, the home of The Northern Ireland Assembly. RollingNews.ie

The Northern Ireland Assembly was recalled as anger grew over proposals revealed last week by Secretary of State Brandon Lewis to deal with legacy issues in Northern Ireland.

Also on Tuesday, victims of terrorism traveled to London to hand over a letter indicating their opposition to what has been described as a “de facto amnesty.”

Lewis last week said he intends to introduce legislation to create a proposed statute of limitations that would end all prosecutions for incidents up to April 1998 and would apply to British military veterans as well as ex-paramilitaries.

The proposals, which British Prime Minister Boris Johnson said would allow Northern Ireland to “draw a line under The Troubles,” would also end all legacy inquests and civil actions related to the conflict.

But the proposals have been heavily criticized by all the main political parties in Northern Ireland as well as the Irish government, and a range of victims’ and survivors’ groups.

Many view the “amnesty” that includes paramilitaries as a devious British move to end prosecutions of soldiers, including Soldier F, the only person charged with murders and attempted murders on Bloody Sunday in Derry.

The recalled Assembly debated a motion that “victims and survivors should have a full, material and central role and input into the content and design of structures to address the legacy of the past.”

The motion also called on the Westminster government to withdraw the plans.

SDLP deputy leader Nichola Mallon said, “Political leaders have an opportunity to send a clear message to Boris Johnson and Brandon Lewis. There cannot be any type of amnesty and every party needs to express that.

“The proposed amnesty announced last week was a crushing blow for victims, many who have spent years campaigning to find out the exact circumstances behind the deaths of their loved ones.”

Among victims’ families in Downing Street in London signaling their opposition to the statute of limitation plans were Raymond McCord, whose 22-year-old son, Raymond Jr., was murdered by the UVF in Belfast in 1997; Billy McManus, whose father William was one of five people killed in 1992 when the UFF opened fire on a bookmakers shop in Belfast; Joe Campbell Jr., whose father Joseph, a Catholic police officer, was shot dead outside an RUC station in 1977; and families of victims of the IRA Birmingham pub bombings in 1974, in which 21 people were killed.

Separately, secret British papers released on Tuesday show that in 1997, one of the areas of disagreement between Tony Blair and the late Mo Mowlam was over Bloody Sunday.

Mowlam, who was Northern Ireland's secretary, wanted the British government to apologize and to launch a new inquiry into what had happened.

RTE, reporting the contents of the documents, says Blair was very reluctant to do so given the likely reaction from the British army and unionists.

Reg Empey of the Ulster Unionist Party told Blair that if there was a new inquiry into Bloody Sunday, the Irish government should be asked to launch a new inquiry into the arms crisis of 1970, which he suggested had helped the formation of the Provisional IRA.

Empey claimed that “Irish government money had been used to help an organization which had since killed 2,200 British citizens.”