Micheál Martin claims Britain could get "turned off" Northern Ireland 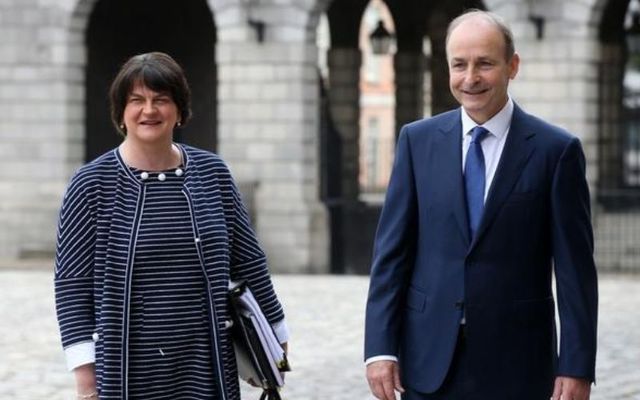 Northern Ireland First Minister Arlene Foster said she was disappointed by Taoiseach Micheál Martin's comments that the Irish Government is preparing for Britain to get "turned off" Northern Ireland.

Martin said that Britain may become less committed to Northern Ireland than it was in the past and told the Independent that he is beefing up the Government's new Shared Island Unit to plan for different eventualities.

He said that the Irish Government had to be prepared if Britain got turned off Northern Ireland, drawing criticism from Foster.

She said that the principle of consent determines Northern Ireland's place in the United Kingdom.

A good neighbourly N/S relationship requires consistency.
After a positive NSMC, the Taoiseach’s comments are disappointing.
The principle of consent determines NI’s place in the U.K.
NI will keep moving forward by respecting our diverse identities not dubious theories. https://t.co/v8pP8HwJzn

Martin told the Independent that Irish people had to acknowledge the reality that the Good Friday Agreement of 1998 had created distinct political jurisdictions on the island of Ireland.

The unit was set up as part of Ireland's Government formation in June and examines political, social, economic, and cultural factors underpinning a future when all traditions are respected on the island of Ireland.

Martin claimed that English nationalism had been rekindled since the Brexit vote to leave the European Union, and said that Scottish Independence may become a reality in the future, meaning that Britain could become tired of Northern Ireland.

However, Martin said that he had no plans to hold a border poll as it would be too divisive and threatening to Unionist communities in Northern Ireland.

He said it would be better if the two jurisdictions could talk about "sharing an island" and said that the purpose of the Shared Island Unit was to develop fresh thinking about the relationship between Northern Ireland and the Republic of Ireland.

Arlene Foster, meanwhile, had previously said that she was not threatened by the Shared Island Unit, claiming that she didn't believe it threatened Northern Ireland's constitutional position.