The murder of Co Tyrone woman Michaela McAreavey while she was on her honeymoon in Mauritius in 2011 will be re-examined by local authorities. 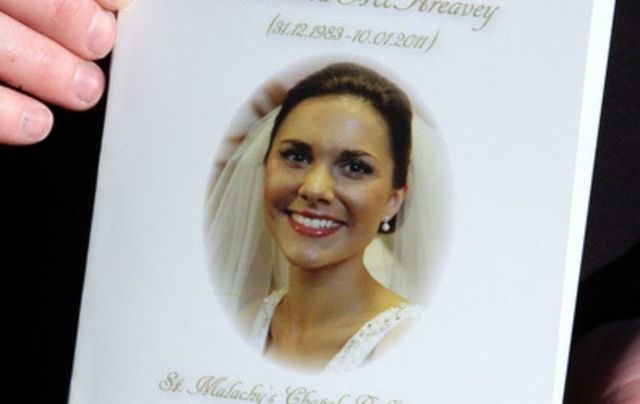 The order of service for Michaela McAreavey's funeral mass in 2011. Rolling News

The government of Mauritius has agreed to reconsider the 2011 murder of Co Tyrone woman Michaela McAreavey.

Foster and O'Neill met with McAreavey's family on Monday morning to update them on the progress following engagement with the Mauritian government.

In a joint statement afterward, Foster and O'Neill said that "options are currently being explored on how best to further support the family in their efforts to see justice delivered for Michaela."

Foster said: “I felt both a personal and professional responsibility to do everything possible to bring about justice for a young woman who was so cruelly taken from the many people who knew and loved her.

"And I’m pleased that one of my last duties as First Minister was to update the family on this important progress and show my support for their unrelenting campaign.”

O'Neill said: "In pursuit of justice for Michaela, the Harte and McAreavey families have fought a decade-long battle with dignity and determination. We gave a commitment to support them in that battle and I’m encouraged that we have now received agreement from the Mauritian government to look again at the case.

“Michaela deserves justice and the very least her family deserve is truth. No stone should be left unturned in pursuing that, and we will continue to do all we can to see it delivered.”

Michaela's widow John McAreavey has led a long campaign for justice. He welcomed the new development on Monday, tweeting: “A significant step in the right direction. Thank you, Michelle and Arlene.”

A significant step in the right direction. Thankyou Michelle and Arlene https://t.co/IiL7QgnxGB

The news that the case will be re-examined comes just a day after Michaela's father, famed GAA boss Mickey Harte, told the Ulster Herald’s ‘What’s the Story?’ podcast: "I know for sure, and our family, we want to make sure that it doesn’t go away. We want to keep bringing it up.

"If it has to be done from time to time we want to bring it into the public domain because we want those authorities out there to know that we’re not happy with what they’ve done since Michaela was murdered and that’s the simple fact of the matter."

Michaela McAreavey, 27, had been married for just ten days to John McAreavey when she was attacked and killed in her hotel room in Mauritius during the couple's honeymoon on January 10, 2011.

Two former workers at the luxury hotel resort - Sandip Moneea and Avinash Treebhoowoon - were acquitted after a high-profile trial n the summer of 2012.