"Be good neighbors" was Arlene Foster's final message to the Northern Ireland Assembly as she formally resigned as First Minister today, June 14. 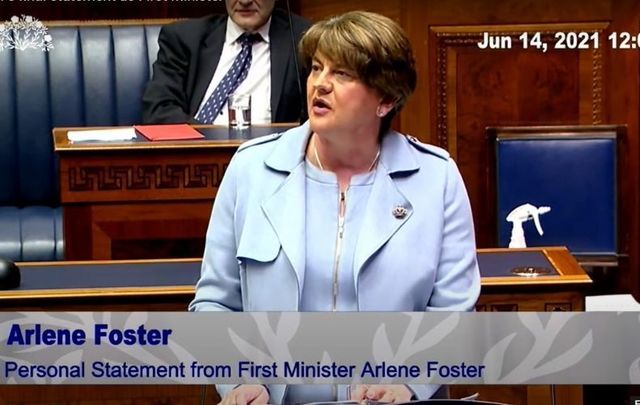 Arlene Foster has today, June 14, officially stepped down from the role of First Minister of Northern Ireland following the announcement of her resignation on May 28.

Foster delivered a roughly 16-minute personal statement in the Northern Ireland Assembly in which she reflected on her time as First Minister.

During her statement, Foster said she has "unfinished business" when it comes to the success of Northern Ireland. She offered inspiring words to the youth of the region and called upon all people in Northern Ireland, regardless of identity, to be good neighbors.

“Mr. Speaker, a former member of this House said to me last week that my closing speech should be in the style of Father Ted Crilly when he received the Golden Cleric Award, but after a moment of reflection, I thought perhaps not.

“Now some of the younger faces in here would be puzzled by who Father Ted was and even more puzzled by the name of the award. But suffice to say, just like all politicians who resign,  I will now spend more time with my family.”

She continued: “It is just as well, speaker, I am such a good daughter, wife, and mother.”

This comment is seen as a slight dig at Edwin Poots, who has been chosen to succeed Foster as the leader of the DUP. In 2016, upon Foster’s appointment as First Minister of Northern Ireland, Poots commented: "Her most important job has been, and will remain, that of a wife, mother, and daughter.”

Foster later said in her statement: “The role of females in public life is something I will continue to champion."

Looking ahead, Foster said: "My time as Northern Ireland's First Minister may have come to a close abruptly, but I remain someone with a passion for service for Northern Ireland and the union.

"This particular chapter may be closing, but I intend to write some more in the years ahead, for I have unfinished business to ensure Northern Ireland succeeds in its new century."

Quoting Oscar Wilde, Foster said: "A dreamer is one who could only find his way by moonlight and his punishment is that he sees the dawn before the rest of the world." Addressing young people who could become the next leaders of Northern Ireland, Foster continued: "Hold onto your dreams because by doing so, you're halfway there."

She continued: “It is only by respecting each other’s identity that we will move forward. The beauty of the union is that we can have all of our identities and live side by side.”

After referencing Samuel Beckett’s ‘Waiting for Godot’ and the parable of the Good Samaritan, Foster concluded her final statement as First Minister by saying: “Mr. Speaker, let us be good neighbors. Thank you for allowing me to speak. Over and out.”