Edwin Poots has been narrowly elected to succeed Arlene Foster after she resigned as leader of the Democratic Unionist Party (DUP) in Northern Ireland. 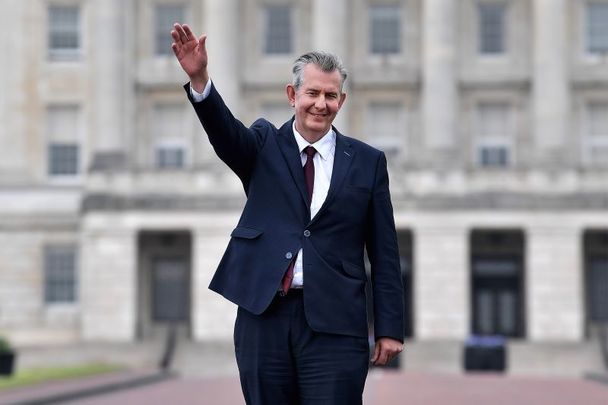 Edwin Poots has been elected as the next leader of the Democratic Unionist Party (DUP) in Northern Ireland.

Poots, who is the MLA for Lagan Valley and the Northern Ireland Executive Minister for Agriculture, Environment and Rural Affairs, bested his opponent Sir Jeffrey Donaldson with a final vote of 19 to 17.

A member of the Free Presbyterian Church of Ulster, Poots, 55, is a young earth creationist and rejects the theory of evolution. In a 2007 interview with BBC, he said: "My view on the earth is that it's a young earth. My view is 4,000 BC."

Poots holds a number of hardline conservative views. In 2012, he faced criticism for saying: "I think that people who engage in high-risk sexual behaviour, in general, should be excluded from giving blood. And so someone who has sex with somebody in Africa or sex with prostitutes, I am very reluctant about those people being able to give blood."

In 2013, he opposed granting adoption rights to same-sex couples: "The truth is that still today, in this modern era, it is only a man and a woman that can produce a child, and therefore I think it is in the best order for a man and a woman to raise a child."

Upon Arlene Foster's appointment as First Minister of Northern Ireland in 2016, Poots commented: "Her most important job has been, and will remain, that of a wife, mother, and daughter.

The 36 members of the DUP's electoral college, made up of its MPs and Stormont Assembly members, were eligible to vote on Friday for the new party leader. It was the first leadership contest in the party's history.

Also on Friday, Paula Bradley beat Gregory Campbell 18 - 16, with two votes invalid, to become the new Deputy Leader of the DUP, the first female to hold the position.

Poots has been elected leader of the DUP in the wake of Arlene Foster's resignation as both the party's head and First Minister of Northern Ireland, which she announced on April 28.

After casting her ballot, Foster told reporters on Friday: "I voted for the person who will bring the Democratic Unionist Party forward and I think that's very obvious."

A spokesperson for Poots previously confirmed that Poots does not intend to take up the soon-to-be-vacant First Minister role: “Edwin will split the roles of leader of the party and first minister.

“Edwin knows the job at hand and for that reason will split the roles.

“He will reshape the party for the future whilst putting in place a good team to work with him and the other parties in a five-party Executive, ensuring that people of Northern Ireland get the Government they need."

Speaking after his victory on Friday, Poots said it was "an immense honor and pleasure" to be in the position and not one that he expected to be in a few weeks ago.

"However, things can change quite radically," Poots said.

After thanking "almighty God," his family, and his election team, Poots said: “I’m looking forward to a positive relationship right across Northern Ireland with my party colleagues and, indeed, people from other parties.

“Throughout all of that, our people have shown remarkable resilience. And it’s that resilience that we are going to go forward and make Northern Ireland a great place.

Poots said the "opportunities are great" in Northern Ireland, and made special mention of improving educational opportunities for young people as well as the health service.

“There’s much to do, there’s much to be done, and I stand here today very proud to be taking up the mantle as the leader of the Democratic Unionist Party and that brings with it a responsibility to all of unionism.

“I want to say this very clearly: I will be a leader in unionism who will be reaching out to other leaders in unionism. I want to see unionism working together.

“The Northern Ireland Protocol has proven to be a massive challenge for us. And if we are to fight this to ensure that everybody in Northern Ireland is not worse off as a consequence of the Protocol, then it’s for us to do that together.

“And I want to ensure that that is the case, that we don’t have the unionist bickering that we have had in the past, and I will encourage all unionists to work with me to deliver an end which ensures we set the foundations in this 2021 for another hundred years of Northern Ireland in the United Kingdom.”

Later, after being declared the winner, Poots shared this video on his Twitter in which he said "I'm convinced that Northern Ireland's best days lie ahead, safe and secure in a union that works for all its people."