Sinn Féin may seek a guarantee from the DUP on an Irish Language Act in order to consent to the nomination of Paul Givan as Northern Ireland's First Minister. 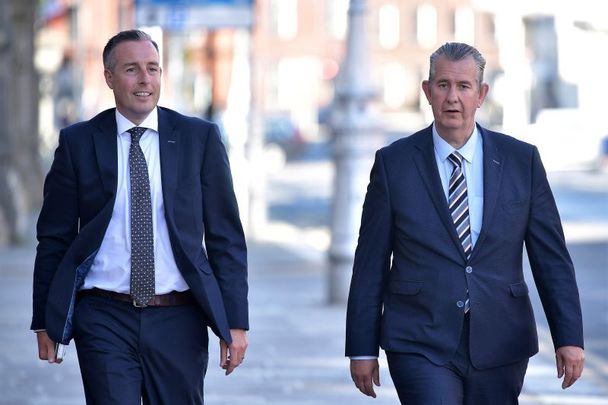 Paul Givan's nomination as First Minister of Northern Ireland was among a number of minsiterial appointments revealed by DUP leader Edwin Poots today.

Poots, who recently became the new leader of the Democratic Unionist Party (DUP) in the wake of Arlene Foster's resignation, announced a number of new ministerial appointments in Belfast today, June 8.

Both Dodds and Weir reacted to the appointments on Twitter:

It is regrettable however that the new team announced today does not match the rhetoric about healing and bringing the party together.

There are some great appointments but disappointed to leave education, and in the balance of appointments it is sad there is little sign of healing or reaching out

The Belfast Telegraph reports that when Foster resigns as First Minister on Monday, Michelle O'Neill, the vice president of Sinn Féin, will be automatically removed from her Deputy First Minister post as the joint office can only function if both positions are filled.

"Both parties will then need to renominate their respective first and deputy first ministers within seven days," The Belfast Telegraph explains. "If one of the parties declines to renominate, then a functioning Executive could not be formed and a snap election would become likely."

It adds: "There has been speculation Sinn Féin might seek a guarantee from Mr. Poots to pass legislation for Irish language speakers as a prerequisite for it engaging in the nomination process."

Poots said: “I can’t see why it wouldn’t be straightforward.

“Because the issues that the public are talking about, in particular the health service, recovery from Covid-19, waiting times in our hospitals of 335,000 – there’s a job to be done. We’ve all got a job to do.

“We’ve got a mandate to do that job. I will respect Sinn Féin’s mandate and I expect them to respect my mandate.”

At 39 years old, Givan, who has been an Assembly Member for Lagan Valley since 2010, will become the youngest-ever First Minister of Northern Ireland.

The challenges are significant as we emerge from Covid and seek to rebuild our community and public services but our strength is in our people and I have no doubt we can overcome these challenges and build a better future for all our people.

Speaking to the press on Tuesday, Givan said: "There's a huge responsibility that comes with this position, particularly in serving the people of Northern Ireland as we come through the COVID pandemic, the recovery that's needed in our economy, within our education system, and meeting the needs of the people."

He added: "What we now need is an effective transition that needs to take place next week so we have that smooth delivery of governance."

"It's a huge task to follow those individuals," Givan said, "but I look forward to the challenge ahead."

Today's announcements come amid a period of great tension for the DUP. Expecting to be the focus of a no-confidence motion, Arlene Foster announced her resignation as both the head of the DUP and First Minister of Northern Ireland on April 28.

Poots, a hardline conservative, was chosen by the party to be its next leader on May 17, narrowly besting Sir Jeffrey Donaldson with a final vote of 19 to 17.

Since Poots was named the new leader of the DUP, the party has endured a number of resignations, including Glyn Hanna, Kathryn Owen, and Diane Forsythe.

Foster seems poised to exit the party when she formally steps down from her roles next week. She said: “I can no longer be a part of this party in its journey to derail my precious country of Northern Ireland in this its centenary year."