Newly-elected DUP leader Edwin Poots faces a string of resignations over the fallout of the ousting of former leader Arlene Foster, according to the Belfast Telegraph. 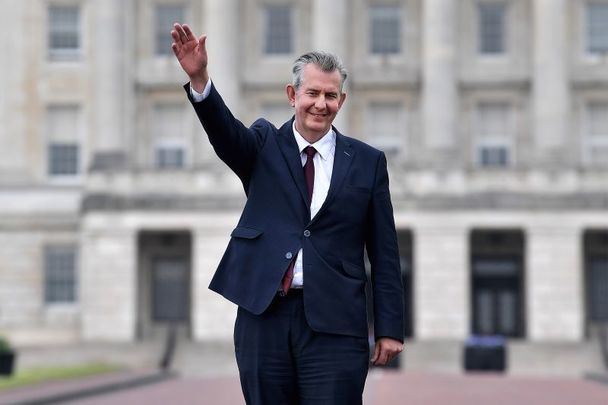 Edwin Poots was elected DUP leader on May 14. Getty

Newly-elected DUP leader Edwin Poots faces a string of resignations over the fallout of the ousting of former leader Arlene Foster, according to the Belfast Telegraph.

The Northern Irish publication reports that a number of DUP members, including elected representatives, will quit the party next week.

Poots, a hugely controversial figure who believes that the earth is 6,000 years old, was ratified as the new DUP leader during a heated private party meeting last week.

Jeffrey Donaldson, a DUP MP who unsuccessfully contested the party's leadership, described the meeting as "fractious" and reportedly walked out during Poots's acceptance speech on Thursday night along with DUP MLA Diane Dodds.

The news comes shortly after it emerged that the Police Service of Northern Ireland was investigating allegations that an illegal loyalist group made intimidating threats to Donaldson's campaign team during the DUP leadership race.

The allegations claim that "intimidating and threatening" messages were sent to Donaldson's campaign team earlier in May, with one person close to Donaldson receiving a message saying "you're next".

Other senior members of the DUP were threatened over the phone or by email.

"Police have received a complaint that a number of members of a political party had been threatened during a recent leadership campaign," a PSNI spokesperson told the Belfast Telegraph.

The Sunday Independent previously reported that "shadowy figures" within the UDA - an illegal loyalist paramilitary group - had threatened DUP members to sign a letter of no confidence in former party leader Arlene Foster.

The paramilitary group reportedly warned DUP MLAs that their seats would be in jeopardy during next year's Assembly elections if they didn't sign the letter.

Veteran DUP member Paul Bell dramatically quit the party shortly after Poots was ratified as party leader, saying that the party will lose "thousands of votes" due to the fallout from the leadership race.

"We cannot go round the doors, the people in Fermanagh and South Tyrone will vote for anyone but the DUP. That is because, not of an election, but because of what took place before the election," Bell told the Belfast Telegraph.

Poots's choice of First Minister is now crucial for the future of the DUP and the political future of Northern Ireland.

The Belfast Telegraph reports that Sinn Féin may refuse to nominate a Deputy First Minister when Poots names Foster's replacement, while the nationalist party is also eyeing an Assembly election as early as September.

Foster, who has agreed to stay on as DUP leader until the end of June, has also claimed that she will quit on Tuesday if Poots names his ministerial team.

Poots' election has divided unionist communities in Northern Ireland, resulting in a significant drop in support for the DUP, according to a Lucid Talk poll.

The poll found that DUP support had dropped to a record low of 16% just weeks after Poots won the party's leadership race.