It's been one year since Margaret Keenan, a native of Co Fermanagh, received the world's first COVID jab and she continues to encourage everyone to get vaccinated. 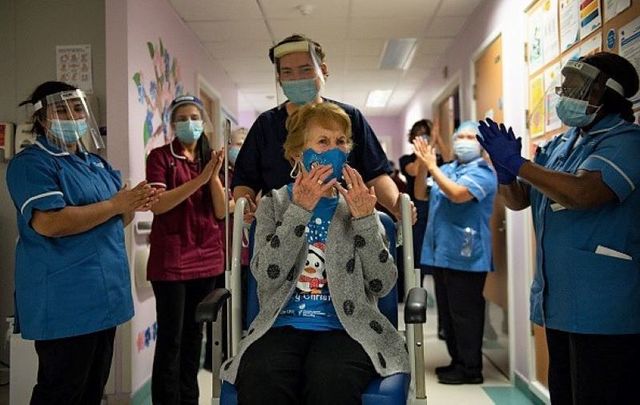 December 8, 2020: Margaret Keenan, 90, is applauded by staff as she returns to her ward after becoming the first person in the United Kingdom to receive the Pfizer/BioNtech covid-19 vaccine at University Hospital at the start of the largest ever immunization programme in the UK's history in Coventry, United Kingdom. Getty Images

Margaret Keenan, 91, made headlines when she became the first person in the world to receive a COVID vaccine a year ago today, December 8, 2020.

Keenan, a native of Enniskillen in Co Fermanagh, received her Pfizer jab at University Hospital in Coventry, where she’s lived for the past several decades.

Marking the one-year anniversary of the historic event, Keenan returned to UHCW to meet with May Parsons, the nurse who administered Keenan’s jab.

On December 8, 2020, Maggie Keenan became the first person in the world to receive an approved Covid-19 jab at UHCW.

Since then the NHS has delivered almost 120 million jabs in what is a world-leading vaccination programme.

Keenan, 91, said: "It was such a privilege and an honor to be the first person vaccinated against Covid-19, everything went by in a blur. I’m not sure it will ever truly sink in."

“The staff at University Hospital, Coventry, showed me such wonderful care and compassion and I am so pleased to have remained friends with May since that day.

“Getting the vaccine gave me so much more confidence to go out to places. It’s saving lives, protecting those around us, and is helping the NHS, so what more can I say – go for it, go and have it done.”

She added: “I hope I’m a good example, skipping down the road.”

The same day that Keenan received her jab in Coventry last year, Joanna Sloan, a 28-year-old nurse from Co Down, became the first person in Northern Ireland - and the first person on the island of Ireland - to receive the Pfizer / BioNTech vaccine.

One year ago today Sister Joanna Hogg made history when she received her #COVID19 vaccine.

Since then:
✔️Over 1.3 million people have been vaccinated
✔️More than 3 million doses have been administered
✔️90% of over 18s now vaccinated

Later, on December 29, 2020, 79-year-old Annie Lynch became the first person in Ireland to receive the jab.

A year on from the initial COVID vaccine roll-out, more than 8.2 billion vaccine doses have been administered around the world, according to today’s data from Johns Hopkins University.