Joanna Sloan received the Pfizer / BioNTech vaccine in Belfast as Northern Ireland's Department of Health unveils its early deployment program for the vaccine. 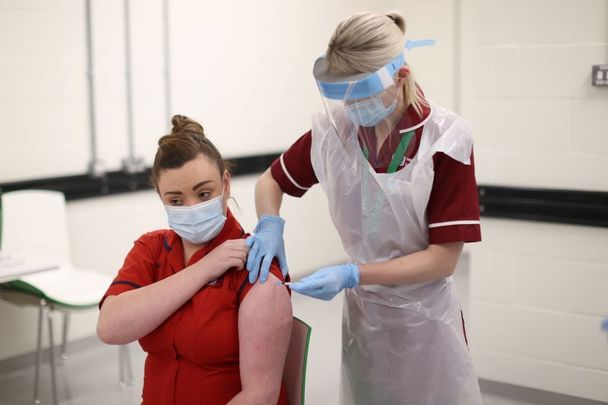 Sloan received her immunization on December 8, the first day that the vaccine was rolled out across the United Kingdom after it was approved for emergency use last week.

Earlier on Tuesday, Margaret Keenan, a 90-year-old woman from Enniskillen, Co Fermanagh, became the first person in the world to receive the Pfizer / BioNTech vaccine. Keenan received the jab in Coventry in the UK, where she has been living for some 60 years.

Speaking on Tuesday from the Royal Victoria Hospital in Belfast where she received her shot, Sloan said: “Being the first person vaccinated meant everything, it felt like a huge moment that we are very proud and privileged to have been able to do today in Belfast.

“I am a nurse. I have been working on the frontline and it felt emotional today to finally be able to say that the vaccine is here and I have been given it.

“I felt very confident, I felt fine afterwards. It was no different than any other immunization I’ve received.

"I would advise the rest of my colleagues to do the same. Trust in the science. The vaccine itself has met all of the recommendations it needs to, it has been thoroughly trialed throughout the world and meets all of the scientific requirements.

“I’m very happy and very confident in it.

“It will take us some time to get the amount of people vaccinated that we aim to. What I would advise is even though today I have received my vaccine, I will be continuing to adhere to social distancing and ensuring I wash my hands and cover my face and keep space.

🎥 Emergency Department Sister Joanna Sloan was the first person in NI to receive a #CovidVaccine pic.twitter.com/cctgwLEhQp

Sloan separately told PA that she hopes she’s made her 5-year-old daughter proud:

Nurse Joanna Sloan, the first person to be vaccinated in NI, tells @PA she hopes her five year old daughter Cailie is proud of her mummy. pic.twitter.com/OhvVdVP36d

Arlene Foster, the First Minister of Northern Ireland, said today is “a day of hope:”

Michelle O’Neill, the Deputy First Minister for Northern Ireland, said that with today’s vaccine roll out in the region, the “tide is starting to turn:”

The tide is starting to turn. The first person will receive the vaccine today. Brighter days ahead. #PositiveNews

Also on Tuesday, Northern Ireland’s Department of Health set out its plans for the early deployment of the Pfizer / BioNTech vaccine in the region.

The department said the program is “an unprecedented logistical exercise that will take many months to complete."

While the Joint Committee on Vaccination and Immunisation (JCVI) is providing the guidance on clinical prioritization in the region, early deployment in Northern Ireland has three central aims:

The Department said: “The focus in the coming weeks will therefore include care home residents and staff (including supported living centres where the clinical risk is considered to be similar to a care home); health and social care staff working with patient groups at higher risk (including embedded support staff); staff working in higher risk settings; staff who are themselves at increased personal risk due to being in extremely vulnerable high risk categories or having other defined clinical risk factors.

“In advance of the GP element of the programme starting, active consideration is being given to options for extending the programme to begin vaccinating over-80s in the community."

The Deparment of Health says seven Trust vaccination centres are being established for the staff vaccination process:

Mobile vaccination teams operating from Trust centres will take the vaccine to residents and staff in care homes across Northern Ireland. HSC Trusts will inform their staff who are in the early deployment groups and encourage them to book their vaccinations through a digital booking platform.

Anyone who is pregnant or breastfeeding or who is planning to get pregnant in the next three months is not advised to get the vaccine.

The full roll-out of the vaccine is scheduled to continue until the summer of 2021. Further population groups will be added to the programme on a phased basis, with priority given to age and other clinical vulnerability factors.

Subject to the availability of a suitable vaccine, it is intended from early January 2021 to expand the roll-out of the programme through primary care-led vaccination clinics.