Julie Lillis has launched a GoFundMe to help get life-saving treatment after receiving a breast cancer diagnosis the day before mounting a charity cycle for Cancer Focus NI. 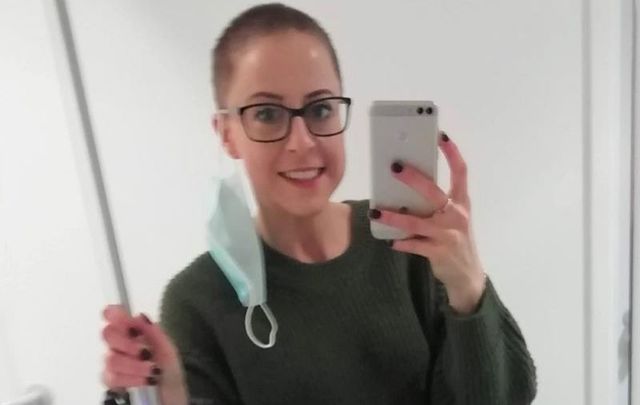 Belfast woman Julie Lillis, 37, is appealing for help in the midst of an aggressive breast cancer diagnosis that she received in September 2020.

Her diagnosis came just a day before she was due to begin her two-day 300km cycle for charity to each of Northern Ireland’s five breast cancer screening centers.

At the time, Lillis explained: “When I was 16 years old, I had a hereditary gene test done which I tested positive for being a BRCA 1 carrier (breast cancer gene). So I’ve known for a while that I was in the high-risk group.  I have been doing yearly MRI screening and checkups with the hope of having a family before having preventative surgery to reduce my risk.

“Unfortunately, cancer had other plans and got to me first.”

After discovering a lump in August, Lillis was diagnosed with the aggressive BRCA1 positive, triple-negative breast cancer at a hospital in Co Antrim, Northern Ireland in September 2020.

She has since endured 15 cycles of chemotherapy as well as a bilateral mastectomy.

“The chemo seemed to have worked well initially,” Lills writes on her new GoFundMe page launched earlier this week, “however, after surgery, it was found that more cancer had started to grow again in the breast tissue."

Lillis sought guidance from a specialist consultant in London who advised her to “urgently find a way to self-fund a drug which has been having promising results in clinical trials for my cancer subtype.”

The potentially life-saving drug isn’t yet licensed or paid for by the NHS and is extremely expensive.

“Unfortunately, now I need to share my story again but this time to try to raise funds to obtain life-saving treatment for myself,” Lillis writes on her new GoFundMe.

“There also aren’t any targeted treatments for triple-negative like there are with other breast cancer subtypes. This means that any drug that has potential to help with the disease is like a lifeline.

“I have found it extremely hard to make this page and ask for help, but with encouragement from friends and family, I have swallowed my pride and the fear of putting myself out there publicly again.

"I am going public in the hope to gain this much-needed lifeline, while also continuing to raise further awareness of the disease.

“So I am asking for kindness and support from friends and strangers alike, to help make this become a reality, being able to fund this promising new drug to prolong my life.

“This whole cancer journey has been a roller-coaster of emotions. Some days are tougher than others but I am not giving up, not when there are still other options to investigate. The only downside is it takes so much funding to explore these potentially life-saving treatments.

“My doctor described my current situation with treatment as being in ‘uncharted waters.’ It has definitely been a choppy ride so far, but I’ve got my sea legs ready and I’m hopeful that it all will be worth it in the end.”

Lillis adds: “If anything comes from this page, at the very least I would like for more women and men to be aware of signs and symptoms, and if you notice any changes in your body to act right away. I went to the doctor as soon as I found the lump and it still wasn’t early enough to ‘catch’ it. So please please don’t hesitate to get checked out immediately!

“If you can donate, no matter how small, every penny is so appreciated.”

You can support the GoFundMe for Julie Lillis here.