John Dunleavy, who emigrated from Co Westmeath in 1963, had links to the NYC St. Patrick's Day Parade going back over four decades. 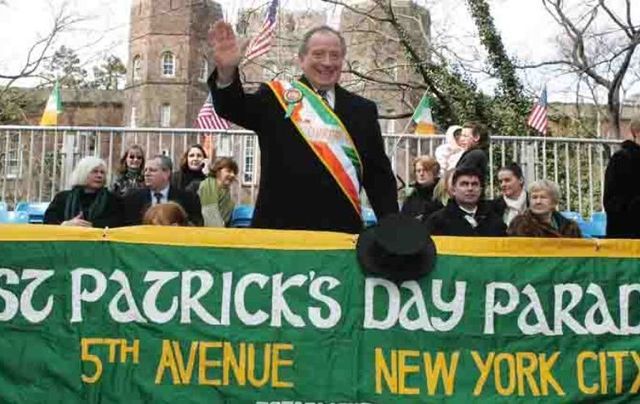 John Dunleavy, who ran the New York City Saint Patrick’s Day Parade with an iron fist, but was removed from the board for bitterly opposing the rights of LGBTQ groups to march, has died. He was 83 and a native of Coole, Co Westmeath.

Dunleavy is the last of the cadre of 1950s emigrants who had a lock on running the New York City St. Patrick's Day Parade for many years. However, after years of damning headlines and angry scenes on Fifth Avenue and a complete focus on the "gay issue", more moderate voices came to the fore.

Matters reached a crisis point when Dunleavy, in an interview with the New York Daily News, likened the idea of LGBT groups marching in the Fifth Avenue St. Patrick’s Day parade to Neo-Nazis marching in an Israeli parade or the KKK marching in an African American parade.

Dunleavy was replaced by Professor John Lahey from Quinnipiac University who quickly agreed on a compromise, which was backed by Cardinal Timothy Dolan. Dunleavy had resigned by then. The current chairman of the parade is Sean Lane, a Wall Street executive.

Contrary to those who forecast trouble if the gays marched, all has been peaceful and respectful.

The gay issue came to define Dunleavy’s tenure and after he was removed, he and a number of other defectors launched a fruitless legal battle to retake control of the parade.

Dunleavy acknowledged to our sister publication Irish America magazine in 2011: “I never ask anybody who they are, in any way, shape, or form if they want to march in the parade.

"When you look at the percentages, there’s probably 160,000-180,000 people marching in the parade, and there’s probably a couple of thousand gay and lesbian individuals [marching] with the Emerald Societies, counties, schools, colleges, fraternal [societies], and everything else.

"But as regards under their own banner, as far as we’re concerned, that’s not acceptable.”

"It would change the spirit of the parade,” he told the New York Irish Examiner, in a 2007 interview. "It's not a coincidence that the parade starts with a mass at St. Patrick's Cathedral."

Still, there have been many highlights: the time Dunleavy, a former transit dispatcher, got the crosstown buses re-routed so the parade could flow uninterrupted; the solemnly powerful moment during the 2002 parade when the entire procession – spectators included – stopped and turned to face south, holding a minute of silence to remember the lives lost on September 11; famous grand marshals, such as Maureen O’Hara, Cardinals John O’Connor and Edward Egan, and Taoiseach (Irish Prime Minister) Albert Reynolds, as well as less well-known but equally deserving figures. 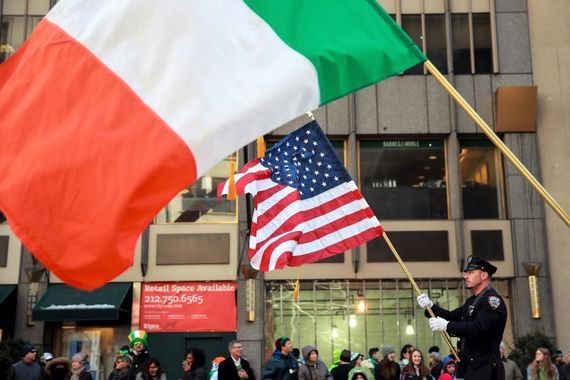 If Dunleavy has a counterpart on the other side of this debate, it would have to be Brendan Fay, Founder of the Lavender and Green Alliance and Co-creator of the all-inclusive St. Pat’s for All parade, which takes place every March in Queens, New York. In the lead-up to the parades each year, both Fay and Dunleavy were sought after by the media for comments.

In the past, Dunleavy has said that despite their differences, he considers Fay to be a friend and was especially touched by the fact that he was among the first to call to offer condolences following the death of Jim Barker, a dear friend of Dunleavy’s who steered the parade towards financial stability.

"I have respect for Brendan Fay and have no problem with him as an individual," he said. "We just disagree on this issue. That's the great thing about America. We're all allowed to express our opinions."

Speaking over the phone, Fay recalled that he first met Dunleavy at a St. Patrick’s Day event hosted by the Irish Consulate in New York.

“That’s very different to meeting each other through the media,” he said.

“Meeting in person can change the way you think about someone. The first important thing to remember is that we’re both human beings. We’re both immigrants from Ireland and New York is our home. John is the leader of the Fifth Avenue [St. Patrick’s Day] Parade, the biggest Irish celebration in the US, and I am an organizer of St. Pat’s for All in Queens... I understand and appreciate all the work that goes into organizing a community parade.

“However,” he added, “there is no undoing the way John and others involved with the Fifth Avenue parade have spoken about me and other Irish LGBT immigrants,”

“So many people have told me that they have regretted this shift in the message of the Fifth Avenue parade, the redefinition of it as an Irish Catholic event that does not fully reflect the parade’s tradition of celebrating Irish immigrants, diaspora and culture,” said Fay, who dates this shift to approximately 1991, after the first and only time LGBT groups were able to march with the parade, as part of the Manhattan AOH Division 7’s contingent.

“I am conscious of the tremendous responsibility we have as stewards and hosts of Irish events. It’s time for change, and I hope and believe we have an opportunity before us. I welcome John and the members of the St. Patrick’s Day Parade Committee to come to St. Pat’s For All on March 2 – to bring their banners and join us, to march with us and hear our stories.”

Dunleavy’s background was solidly in the conservative Irish Catholic mold. He was born in 1938 in Coole, Co  Westmeath, which he described in a 2007 interview with the New York Irish Examiner as “a beautiful little village with no luxuries.”

His father ran a small local shop and a taxi service, the family grew their own vegetables, and electricity arrived in the 1940s. He headed to London in 1956 and worked as a bus driver for seven years before immigrating to the US, in 1963, first staying with an aunt in New York.

He found a job through the old Irish Institute on 48th Street, and in order to secure a visa registered with the Selective Service. He was called for duty six weeks later and went to train at Fort Dix before serving for two years in the Hawaiian islands with the 65th Engineer Battalion, 25th Infantry Division

After returning to New York, he began a 25-year career with the Manhattan and Bronx Surface Transit Operating Authority – first as a bus operator, then as a dispatcher, then as a superintendent until his retirement in 1990. He and his wife, Maureen, from County Cavan, had two daughters, Patricia and Catherine.

Dunleavy’s links to the parade go back over four decades, to his first year volunteering to organize marchers at the parade’s formation point. He climbed the ranks to serve as financial secretary, treasurer, vice chairman, and then chairman. He also became active in the AOH, serving as president of AOH New York Division 9 and of the New York County Board.

In 1993, Dunleavy stepped into the vacancy created when the 1991 split between the Ancient Order of Hibernians and the parade committee resulted in the ousting of previous parade chairman Frank Beirne (also a retired bus dispatcher) who had been in charge since 1984. Beirne was preceded by Judge James J. Comerford, who ran the parade with an acknowledged iron fist for 19 years.