The greatest Irishman in American history celebrates his birthday today

His story takes place across three continents and he distinguished himself wherever he went, remaining a huge hero to the Irish in America. Can you guess who it is? 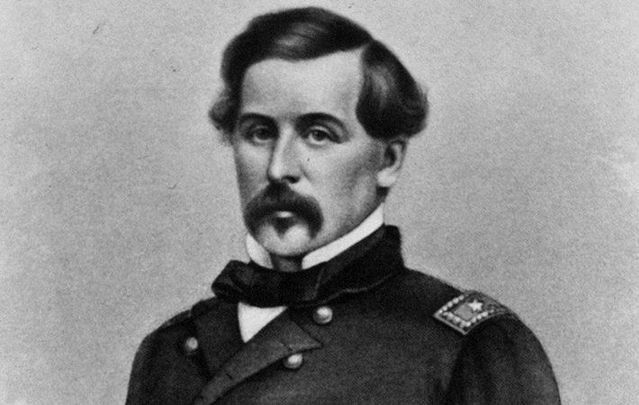 On this day, August 3, in 1832, General Brigadier Thomas Francis Meagher was born in Waterford Ireland. In honor of his birthday, we look at the astounding biography of the leader of the Irish Brigade.

“The Immortal Irishman” subtitled “The Irish revolutionary who became an American hero” is a book by New York Times columnist Timothy Egan and should be a Pulitzer contender.

There have been some excellent books on 19th-century Irish America including Terry George’s seminal work on John Devoy and Peter Quinn’s fictional, but deeply revealing, “Banished Children of Eve.”

But this book on Brigadier General Thomas Francis Meagher is of a different category again.

What Egan has done is restore the reputation and uncovered a host of details on a man I would venture to say had no peer in our history of Irish America.

His story takes place across three continents and he distinguished himself wherever he went, remaining a huge hero to the Irish in America.

Read more about Meagher: Do you know the story behind the Irish flag?

The book quite simply is the best I have seen written on an Irish revolutionary figure in America and that is no idle statement.

It is almost impossible to describe in a few sentences the career of Meagher, born to a wealthy family in Waterford where his father was Mayor and a British MP.

Having seen the horrific reality of the Great Hunger, Meagher followed a very different path. He led the 1848 Rising in Ireland, was transported to Tasmania in Australia, escaped to America where he was greeted as Ireland's greatest hero, founded the Fighting 69th, which showed incredible courage in the American Civil War, and was named acting governor of Montana before dying in mysterious circumstances at just 43 years of age.

He was also a friend of Abraham Lincoln, and indeed, Lincoln saw him once from his sickbed after refusing all other visitors.

Lincoln had visited the Fighting 69th once and noted their bravery, grasping their banner and stating “God Bless the Irish.” Those were words that no British leader would ever speak and Meagher recognized that.

He became an outspoken opponent of slavery at a time when the majority of Irish in New York did not want to fight and die to free African slaves. He went further demanding they be granted full citizenship, not just freedom. “The Black heroes of the Union army have not only entitled themselves to liberty but to citizenship,” he declared.

He was known as “Meagher of the Sword” for his impassioned defense of fighting the British over the Famine holocaust rather than Daniel O’Connell’s way of seeking help through political connections with the Whigs [former British political faction] who ended up more vicious towards the starving than the Tories [members of the Conservative Party in the UK].

His inspiration was the American War of Independence: “Abhor the sword, stigmatize the sword. No, my Lord, for at its blow a giant nation started from the waters of the Atlantic and by its redeeming magic and in the quivering of its crimson light the crippled colony sprang into the attitude of a proud Republic – prosperous limitless and invincible.”

He was fearless in his commitment to causes involving injustice anywhere and his beloved Ireland.

Egan also clarifies what happened at the end in Montana, where he was opposed by a group of vigilantes who ran the territory before his arrival, hanging suspects at will.

Egan’s take on Irish-American history gives this book a breadth and significance that would be very hard to match.

Is Thomas Francis Meagher the greatest Irishman in American history? Disagree with us? Let us know what you think in the comments section, below.