Sinn Fein and Gerry Adams will never give up

"Irish America was reminded again and again... that without their dogged persistence, there would not be a successful peace process." 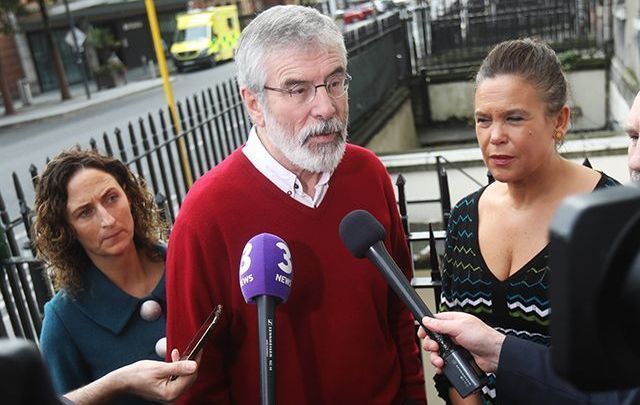 Gerry Adams and Mary Lou McDonald on the steps of the Sinn Fein offices in Dublin. RollingNews

The title of the new book by Gerry Adams is Never Give Up, and there were copies at every table at the Friends of Sinn Fein dinner at the Sheraton in New York last week.

As a theme for the night it worked well as Irish America was reminded again and again by Adams and other speakers that without their dogged persistence, there would not be a successful peace process.

Never Give Up could also be a siren call for a united Ireland, which given demographic shifts and British government incompetence on Brexit has suddenly appeared much closer on the horizon than previously thought.

All of the Sinn Fein leadership were keen to acknowledge that without Irish America’s help, the drive for a 32 county Republic effort is severely weakened.

As Adams noted, the difference between a dream and a vision is that a visionary sees things through. Irish American have certainly shown they were not found wanting when the vision thing was needed by bringing President Clinton on board.

Some $400,000 was raised and a near record crowd was in attendance at the dinner to hear Sinn Fein’s new Northern leader Michelle O’Neill, heir apparent to Adams in the south Mary Lou McDonald, and then Adams himself.

Sadly missed on the night was Adams’s cohort for so many years, Martin McGuinness, though a fulsome video tribute was paid which only reminded all of the stalwart leader who had been lost.

The consensus opinion from all three leaders is that Brexit has swung the Northern Ireland issue towards a unity outcome more firmly than any development in recent times.

Sinn Fein can hardly believe its luck that the British stumbled into a morass of their own making and that Irish unity looks like the big winner.

Adams may well point to his new book title as the way forward.  Back at the beginning of the peace process the party’s support fluctuated around two percent in the Irish Republic; now they have about 16-18 percent backing.

Adams has been in charge as party president since 1983, an unparalleled time for n Irish party leader.  The political road map he and the late, great McGuinness created towards a united Ireland has inched and then leaped forward in those 33 years.

There was a stunning result in the Brexit vote in Northern Ireland when a clear majority, including many unionists, made clear the option of sticking with England and having the British going it alone was not to their liking.

Then a recent extensive opinion poll showed voters under 45 had a majority for a united Ireland, including many unionists sick and tired of being the hind tit of British politics, ignored at every turn.

It was only when Theresa May needed Democratic Unionist Party support to stay in power that Ireland got noticed. With May floundering as leader and up to 40 Tory MPs wishing her gone, that particular deal might go the way of the dodo soon enough.

At 69 years of age Adams is seeing the final chapter of a remarkable career play out. His party may well help form the next government in the Republic where they most likely will be the crucial swing vote after the election.

Power is close, very close for Sinn Fein in the south and that is a massive game changer.

Here's a short clip on Gerry Adam's Never Give Up, released by Sinn Fein: