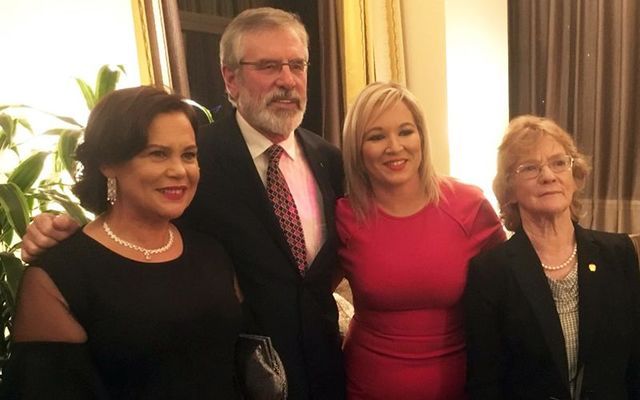 Friends of Sinn Fein, the United States fundraising arm for Sinn Fein in Ireland, raised $400,000 for the party at a crowded dinner at the Sheraton Hotel in midtown Manhattan, on Thursday night (Nov 9). Attendance was considerably higher than in recent years, a fact put down to renewed interested in the Irish unity issue brought about by Brexit.

A video of the late Martin McGuinness and his many trips to America drew a standing ovation. A large portrait of McGuinness dominated the area leading into the Sheraton ballroom.  A copy of “Never Give Up,” the new book by Gerry Adams, was in every seat as well as a commemorative publication about Martin McGuinness.

Sinn Fein has been raising money in the US for 22 years now. In 2015 they reported a total of $12 million raised for the party in the first two decades.

In his remarks, Adams stated that recent developments had brought Irish unity back, front and center, in Irish and British politics and that had to be reflected in American politics.

He stated it was critical that US politicians make a renewed push for Irish unity and that Sinn Fein would be targeting politicians of both parties over the next election cycles and ensuring that support for a united Ireland was on their foreign policy list.

Recounting the success of bringing President Bill Clinton on board on the Irish issue which transformed it, Adams stated “Don’t let anyone tell you that you are not powerful” to the Irish Americans present.

On Brexit he stated it was ironic that having been told all their life they had to accept the majority vote of unionists, nationalists were now told that the Northern Irish majority against Brexit was of no consequence.

He stated the impasse on returning to the Northern Ireland power sharing government could only be broken by the Democratic Unionist Party recognizing that issues of identity such as the Irish language was of critical importance to nationalists.

He also stated that such policies were negotiated into the Good Friday Agreement and subsequently but had never been delivered on.

He said the policy on achieving Irish unity would the main topic of the upcoming Sinn Fein Ard Fheis (annual convention). He stated he would make his own intentions clear for the future politically at the Ard Fheis.

He has been President of Sinn Fein since 1983 and he has spoken of an orderly transition being announced.

On the impact of Brexit, Mary Lou McDonald drew laughter when she stated that even Fine Gael had been advocating a united Ireland something that caused her to check outside her window to see “if pigs were flying by”.