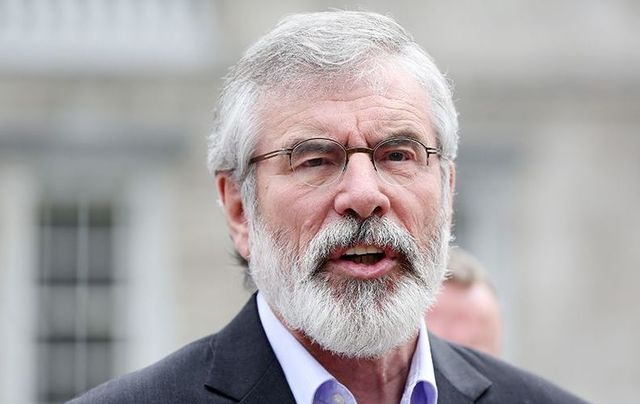 Sinn Féin President Gerry Adams TD has described the recent briefings by Irish government sources on the status of negotiations in the North as “malicious, shameful, and untruthful”. RollingNews.ie

Sinn Féin President Gerry Adams TD has described the recent briefings by Irish government sources on the status of negotiations in the North as “malicious, shameful, and untruthful”.

The Sinn Féin leader accused the Taoiseach [Irish Prime Minister] of “behaving in a reckless way and he should stop it and behave like a Taoiseach should behave.”

Varadkar seemed to question a fundamental tenet of the Good Friday Agreement which calls for a border poll that would deliver a united Ireland if gaining more than 50 percent support.

Varakar stated that 70 percent or so would be a much more realistic number given the need for Northern unionists to buy in.

But Adams believes he is contradicting an international treaty that states a simple majority is enough. He also took issue with the way the government was briefing about Sinn Féin.

In a video briefing today, Gerry Adams restated Sinn Féin’s commitment to “get the Good Friday Agreement institutions backup in place on a sustainable and stable manner which delivers for citizens. We’re led in that endeavor by Michelle O’Neill and Michelle has made it very, very clear what is required and we are working with the DUP to secure this.”

Gerry Adams said: “I want to deal with the Irish Government’s role. There is a threat by the British Government to bring back direct rule which never worked at any time on this island and arguably is the cause of all of the difficulties we have had. The Taoiseach needs to make it clear that this will not happen. There is a very clear commitment in the St Andrew’s Agreement and in statements by the then Taoiseach and British Prime Minister that there could be no return to direct rule.

Leo Varadkar calls Gerry Adams the "great misleader in Irish politics" and says SF policies a "pig in a poke". The attacks continue...

“The Taoiseach, faced with this, is sleepwalking into a deepening crisis in Anglo-Irish relationships if he allows this to happen and that’s on top of the difficulties caused by Brexit. So I’m very concerned that he’s not as focused as he should be on these matters and on his responsibilities.

“There was malicious, shameful, untruthful briefing of the media about the state of the talks last week and particularly shameful and untruthful allegations made by government sources about our leader in the North Michelle O’Neill.

“I am very concerned about an issue as important as this that the government is using spin and anonymous briefings in the interest of its own narrow political agenda in this State with no real sense, no real concern about the necessary process in the North.

“In reality, Micheál Martin and Leo Varadkar should be at the same Ard Fheis, speaking from the same platform.” - Gerry Adams https://t.co/P6i3jfClwu

“The Taoiseach in my view, by what he has said and by these briefings, is behaving in a reckless way and he should stop it and behave like a Taoiseach should behave on issues which are in the national interests and above party politics.

“Of course the Government is entitled to try to score points off Sinn Féin, that’s part of the business, but in terms of getting the institutions back in place, the Taoiseach must fulfill his responsibilities and his obligations and his duty to the people of the entire island. He’s a Taoiseach, not just a Fine Gael leader. He needs to behave like a Taoiseach.”

What did you make of An Taoiseach's comments? Let us know your own thoughts on a United Ireland in the comments section below.