President Trump is making good on his promises with immigration ban

"Just imagine. A leader who is doing exactly what he said he would during the election! And doing a lot of it in the first week." 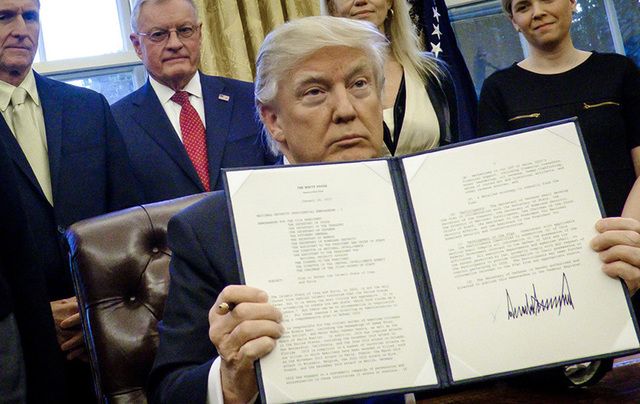 President Trump holds one of his executive orders in the Oval Office.

Let us put to one side for a moment the tsunami of international condemnation that has descended on Donald Trump in the last week and consider this.  It takes Irish politicians months or even years to get anything done, so President Trump's whirlwind of action and executive orders in his first week in office has to be impressive from this perspective.

You may approve or disapprove.  But even if you have now been confirmed in your belief that he is absolutely appalling, you cannot deny his chutzpah.

Just imagine.  A leader who is doing exactly what he said he would during the election!  And doing a lot of it in the first week!  Such a thing is unheard of in Ireland, where failing to deliver on your election promises is almost an art form.

A leader who is willing to slice through all the red tape and get things moving on election promises within days of taking office, that wouldn't work over here at all!  No, no, we would need much more time for second thoughts and unforeseen complications, which would inevitably mean lengthy delays and in the end little or no action.

But as we now know, that's not the Trump way.

Of course signing executive orders is the easy part.  Following through is another thing altogether, and the jury will be out on Trump's competence on that for some time.

But like him or loath him, he certainly has lived up to his guarantee to do things "so fast your head will spin."

By far the most controversial part of his first week has been the moves to control immigration, in particular the order introducing an immediate 90-day ban on people from seven Muslim-majority countries and a four-month ban on refugees.  This has brought international vilification down on his head, as we said, but that appears not to bother him at all.

In fact he seems to be reveling in the uproar both at home and abroad, knowing that this plays well with the people who voted for him.   And it has to be recognized that he promised during the campaign that he would take this kind of action, so it's not like there was no warning that it was coming.

Perhaps the real shock on the liberal side is that none of them expected him to actually do it.

Here in Ireland several government ministers have been expressing their "deep concern."  There is a particular worry that some travelers to the U.S. from the Middle East who stop in Dublin or Shannon to do U.S. immigration preclearance here might be prevented from flying onward -- which might give the impression that Ireland was colluding with the new Trump rules for entry to the U.S. 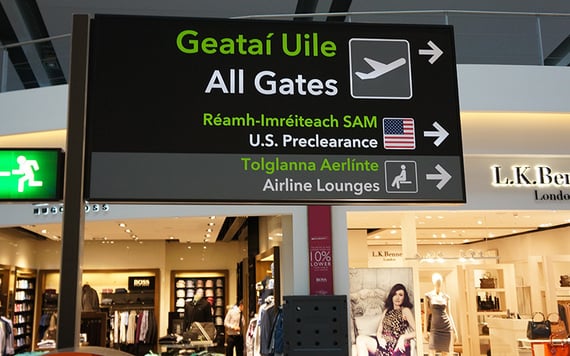 All of the commentary here has been negative and some of the righteous outrage from Irish refugee supporters, liberal bodies and left wing groups has verged on the hysterical, as it has elsewhere.  This perfect storm of angry reaction has dominated coverage on Irish TV news, with reports from the US on the demonstrations at airports, on divided families, on young children being held for hours, and foreign students and traumatized refugees, all of whom had visas, blocked by the sudden ban and left in limbo.   The RTE TV news on Sunday night led with a story of one refugee child who is a cancer patient and was now unable to go to the U.S. for planned treatment.

There has been little balancing coverage here giving the Trump side of the argument about controlling immigration and reducing the threat of terror.  We have now learned that restrictions on U.S. entry have been imposed by previous presidents.  We have also learned that the seven countries named by Trump had already been identified as posing a risk to the U.S. by the Obama administration.

Nor has there been any reference in the media to the mass deportations carried out during the Obama years.  Of course none of this would have supported the narrative of Trump as the devil incarnate.

But even among those here who believe in the need to control immigration and borders, there is a general recognition that Trump's sudden ban was unnecessarily ham-fisted and cruel.  It is now being finessed into something more acceptable, with green card holders and other categories allowed in.

If it had been introduced in that way at first with immigration officials given the power to make sensible exceptions (like for the child with cancer and for others who clearly posed no threat), then the reaction would have been far less extreme.

The concern here over the ban came on top of fears generated by the Trump order to start the construction of the border wall with Mexico and how that might presage a general crackdown on illegal immigration that could eventually impact the undocumented Irish.

The wall order was greeted with disbelief and disdain by most of the commentariat in Ireland. There were withering observations about how absurd the whole notion is -- and with good reason.

Spending $20 billion on a 20-foot high wall when a lightweight 22-foot aluminum ladder that costs $150 is all you need to get over does not seem very smart.

The fact is the wall will only work if huge sums of additional money are spent on guarding it around the clock to catch climbers and tunnelers.  That will mean a vastly expanded border operation, with the latest monitoring technology and thousands of additional guards, as Trump has planned.

If that does happen, then the wall can be effective.  Whether it's worth what it will cost to make it effective is another question.

But the horror on this side of the Atlantic at the very idea of the wall with Mexico is a bit hard to take when many European countries are now strengthening their own immigration control systems, including building miles of border fencing across southern Europe. 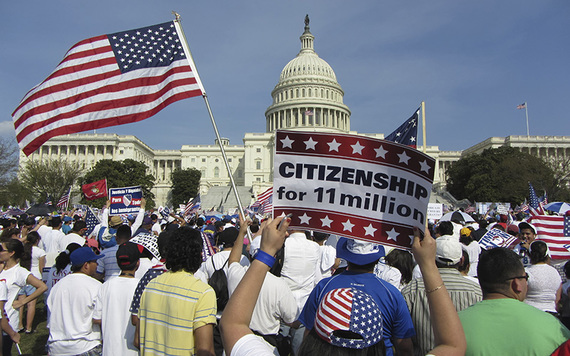 Whether those on the liberal side of these arguments like it or not, the single most important factor in the election of Trump in the U.S. and the Brexit vote in Britain was immigration.  The liberal consensus that has governed much of Europe, supported by a largely liberal media, has ignored the views of many ordinary people on immigration for too long and is now paying the price.

These ordinary voters are tired of being patronized and told they are xenophobic racists with irrational fears.  They have real concerns about immigration and they are making their views known in the privacy of the voting booth when they get the chance.

Whether they are right or not is beside the point.  In a democracy their views must count, instead of being suppressed under a tide of political correctness.

The same "populist" groundswell that elected Trump and made Brexit a reality will be a significant force in the elections in France, Germany and the Netherlands this year -- and possibly in Italy as well.  At the very least the old consensus in Europe is likely to shift a bit more as the status quo political parties try to cope with this new electoral reality.  Part of that shift means a more restrictive policy on immigration.

And any idea that Ireland can be entirely immune from this is mistaken.

The reaction to Trump's first week in the media here, as we said, has been entirely negative.   The public reaction -- in reader comments at the end of newspaper articles and on radio phone-in shows -- is far more mixed.  Some of it is surprisingly hardline, even insisting that the "undocumented" Irish in the U.S. will have to take whatever comes their way under Trump because every country has the right to deal with illegal immigrants.

Nor is this view coming just from uneducated ordinary folk who don't know any better, as is frequently alleged.  The Irish Times, the favored newspaper of liberals in Ireland, recently printed an opinion piece by one of its reporters supporting the government decision to place 80 refugees in the small town of Ballaghdereen in the west of Ireland without any prior consultation with local people or their local politicians.  The dozens of reader comments were about 90 percent negative, among them ones saying the writer was "naive and patronizing" and that this was "typical arrogance from those who think they know better than the ignorant masses." 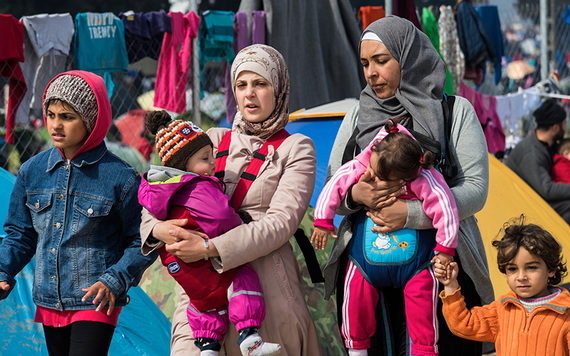 In little more than 20 years immigration into Ireland has gone from not much more than zero to 20 percent of the population, a rate in such a short time that far exceeds the immigration rate into the U.S.  This has caused severe pressure on schools, hospitals, housing and services which effects the lives of ordinary people rather than the better off who may have more idealistic views on immigration but live in the leafy suburbs.

In Ireland -- and across Europe -- attitudes to immigration are hardening on issues like free movement within Europe and on economic migrants from outside posing as refugees.  In Britain, the failure to control the number of immigrants coming in from Eastern Europe has resulted in the U.K. leaving the EU.

In Germany, many voters are unhappy at the open door policy that allowed in a million refugees (only half of them Syrian) with minimal checking.  In France, terrorist attacks have made voters far less tolerant.

Every time the Irish Independent publishes a report on another rescue by the Irish Navy of people on a migrant boat in the Med, the paper is inundated with scathing reader comments about the fact that most of the migrants are clearly not Syrian and that 90 percent of them are young men. The dozens of comments each story provokes are all negative, and many refer to the "ferry service" being provided by the Irish Navy which they say is encouraging economic migrants from all over North and Sub-Saharan Africa to risk the dangerous crossing and claim to be refugees.

There is a growing view also across this online commentary that the best way of helping those most in need due to the Syrian conflict is to target all our aid to the millions living in the refugee camps in the surrounding countries.

In this view, bringing a relatively small number of migrants to Europe -- or America -- may make us feel better but does little to alleviate the main problem. Trump has indicated in the last week that he will increase aid to the camps in Jordan (the U.S. is already by far the biggest donor in the region).

What all this means is that the anti-Trump demonstrations and denunciations we have seen on this side of the Atlantic are only telling one side of the story, the idealistic, liberal side.   The other side, the more realistic, practical assessment of many ordinary people, is more in line with the Trump view on borders and immigration than the commentators and the TV news pictures suggest.