There is no doubt that thousands of New Yorkers of all backgrounds and beliefs were delighted to once again take part in the 261st annual celebration of pride in Irish heritage, the largest and most famous St. Patrick’s Day parade in the world. 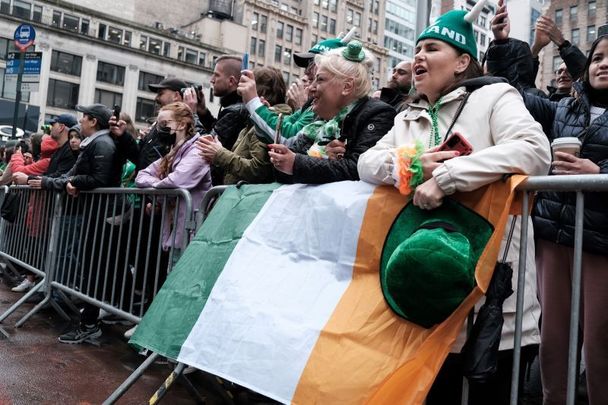 March 17, 2022: People cheer as marching bands participate in the St. Patrick's Day Parade down 5th Ave in New York City. Known as the world's largest St. Patrick's Day Parade, New York welcomed back the annual event after holding a virtual event last year due to the Covid-19 pandemic. Dozens of bands, performers politicians, and other groups made their way up Fifth Avenue in a celebration of Irish heritage. Getty Images

The roll of drums, the skirl of bagpipes, the serried files of cops and firefighters, the cadence of marching feet – the celebration of St. Patrick’s Day on Fifth Avenue in New York City in 2022 was never more welcome.

There is no doubt that thousands of New Yorkers of all backgrounds and beliefs were delighted to once again take part in the 261st annual celebration of pride in Irish heritage, the largest and most famous St. Patrick’s Day parade in the world.

After two years in miserable silence on March 17, the streets of New York City once again reverberated with joy, laughter, and goodwill in abundance. Toasts were made, big crowds lined the route and Irish celebrations were everywhere as New York threw the grandest party of all.

Across the country hundreds of other parades stepped off with pride, re-establishing the ancestral link to parades long ago when the Irish took over America for a day.

In the beginning, the parades were a statement of belonging from a group that had to fight extraordinary discrimination. The New York City parade was a highly public way of raising the head and saying we are Irish and we are part of America.  Many of the early parades were attacked by Orange gangs and riots often ensued. But still the Irish marched on.

Those were was dangerous times. Over 60 civilians were killed in 1870-‘71 when an Orange march demanded to be allowed through a Catholic neighborhood, a horror also known as the Orange Riots. Marching as a badge of your identity was a huge issue then.

But in modern times a less familiar enemy, a deadly virus, laid low St. Patrick’s parades all over the U.S.

The absence of the parades during Covid had been a bitter blow to so many who consider St. Patrick’s Day the start of spring, the day when winter releases its icy grip and the world is renewed.

All over the country, parade crowd numbers were reported up sharply, a clear indication of how desperate the need was to get out, greet friends and march.  Even though it rained intermittently in New York City nothing could dampen the spirits or diminish the memorial during the parade for all those who had passed away from Covid and the heroic first responders who had saved so many lives during that dreadful span. The noon moment of silence, which also marked last year’s 20th anniversary of the 9/11 terrorist attacks, was truly special.

We may not be out of the Covid woods yet as new strains emerge of the cursed virus, but it is highly unlikely we will ever hunker down for two years again.

The lack of controversy these days after the New York City parade allowed Irish gay marching groups in 2016 is a tribute to an enlightened parade management headed by Chairman Sean Lane. And the parade board’s decision to have two small but deeply symbolic parades during the Covid years assured historic continuity in Manhattan.

It was gratifying to see representatives from the Ukrainian community march with Northwell Health, their tragic history of bordering a major imperialist power very familiar to the Irish.

This year will always be marked as the one when the parades returned and a sense of normalcy was restored to the biggest Irish day on the calendar.

Who knows what challenges we face in the future, but we can look back at the resumption of the parades all over the country with pride. Once again the marches brought people together across the country and a dark period, hopefully in the past, was eclipsed by sunshine, hope, camaraderie and promise.

It was a case of the old hymn “Hail Glorious St. Patrick” for so many.  We’re already looking forward to next year.

You can watch back on the NBC 4 New York broadcast of the 2022 New York City St. Patrick's Day Parade here:

*This editorial first appeared in the March 23 edition of the weekly Irish Voice newspaper, sister publication to IrishCentral.