NY GAA reports: Rebels move to next round

A round-up of the GAA games played over the last week in New York. 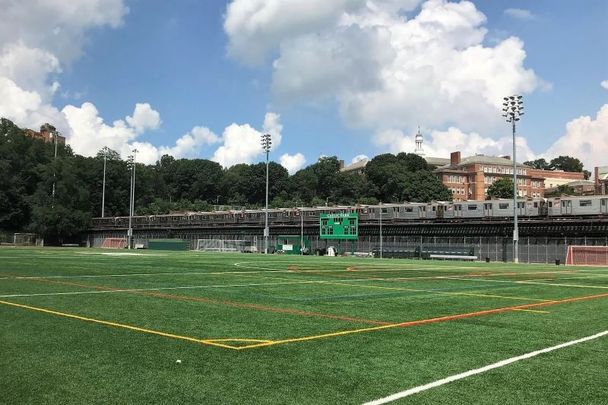 Gaelic Park, the home of the GAA in New York.

This junior football clash had important consequences for the victors and the vanquished. The winners moved on to the next round, while the losers start planning for next year.

This was an exciting game as the scores were close though the football was rather uninspiring at times, principally to sloppy finishing and too many wayward passes.  Meanwhile, Cork started well and had three points on the board courtesy of veteran Alan Raftery, Conor Hunter, and Tom O’Sullivan.

Ger McCartan opened Monaghan’s account and then they jumped ahead on the back of a goal from Niall Corbett. The Farney men went in at the first water break leading by 1-2 to 0-3.

Cork enjoyed a productive spell after rehydration as they put three unanswered points on the board. O’Sullivan had the first after good support play from Niall Judge and Raftery. He also had the next one with a valuable assist from Mike Sheedy, and Raftery finished a nice movement involving Judge and Hunter for number three.

Then an invigorating run by full-back Paul Lambe lifted the siege on the Monaghan goal to land a fine point. The sides were level at the short whistle as McCartan and Hunter pointed frees to leave the score at 1-4 to 0-7.

On resumption, Monaghan appeared to be in the driving seat as they hit over two quick points. In addition, they orchestrated a number of goal opportunities but these were repelled by stern defending from Lavin, Cahill, Sheedy, and company.

The Rebels once again stepped up their performance as James McInerney came off the bench to score a fine point and Raftery rode several tackles to score as well. Then O’Sullivan put them ahead with a shot that managed to hit both uprights before falling over.

However, McCartan had the sides level entering the last quarter.  The Rebels finished the stronger as Dara Walsh and Hunter hit over points and a Ger McCullough free increased the lead to three.

Monaghan launched several late attacks in search of a goal and the ball was scrambled hither and tither across the goalmouth with deflections and rebounds, but there was no goal. Indeed the situation was reminiscent of a competition years ago in the Irish papers, namely “spot the ball.”  In fact, the referee was on his hunkers trying to get a view.

Cork were deserving winners as they made much better use of their scoring opportunities.

Man of the Match: Alan Raftery.

As the scoreline indicates, Tipperary was much the superior team in this hurling contest.

In the opening minutes, Mike Sheedy had three points on the board before Brian Conroy raised the first flag for the Ulster men. Indeed Sheedy would go on a major scoring spree, bagging three goals and a plethora of points in the process.

Steve McAfee added a second point for his team and Frankie Kennedy chipped one over for Tipp to leave the score at 0-4 to 0-2 at the water break.

Meanwhile, Ulster drew level after rehydration with two well-struck frees from Colm O’Kane. However, David Pond pushed Tipp ahead with a goal.

Both sides traded a few points before McAfee blasted a 21 yard free to the net to leave the scores tied at 1-6 with five minutes left to play in the period.

Sheedy and McAfee exchanged points before Sheedy planted the sliotar in the corner of the net. With Liam O’Connor keeping the front line, well-supplied points flowed over from Sheedy, Pond, and Liam O’Donovan.

Still, there was just a goal between the sides at the short whistle as O’Kane and Eamon Brennan had late points to leave the score at 2-9 to 1-9.

On resumption, O’Kane reduced the deficit to two points but Kevin Bullfin replied for Tipp. Then a herculean point from McAffee gave the Ulstermen a great boost.

However, that was as good as it got for the Ulstermen as a two-goal strike by Man of the Match Sheedy burst their bubble. Indeed, the word in the press box was that Sheedy was deployed close to goals to conserve his energy as he had already helped Cork in the previous game.

Well, he certainly didn’t give the scorekeeper much of a rest. The goals killed off the game as a contest and despite the best efforts of Ulster, there was no way back.

Tipp continued to tap over scores from Sheedy, Moriarity, Butler, and Hynes while McAfee, Hatzer, Kennedy, McFetteridge, O’Kane, and company did their best to slow down a Tipp team that hit top form.

Man of the Match: Mike Sheedy.

This clash between the western teams also had serious implications for the winners of this intermediate football clash, and the vanquished. Both teams had just one victory, namely over Cavan, so victory was imperative for the season to continue.

Though there was little between the sides for much of the game, two goals from the penalty spot would prove decisive.

Leitrim did think that they had a legitimate claim for a penalty, but after consultation with his officials, it was determined that the infraction was outside the penalty box.

Meanwhile, Leitrim opened the scoring with a pointed free from Paul Ellis. Mayo soon leveled as Shane Slattery pointed a free a foul on Ollie McLean.

Mayo was having the better of the exchanges as they were winning the breaks at midfield and, Slattery was unerring with his frees from infringements. Ellis got one back after his brother Fergal was fouled.

Leitrim enjoyed a productive spell as they would hit three unanswered points on the board.  Ellis pointed from a close in free after the referee spotted an off the ball offense. Paul Ellis then landed a spectacular point from away out on the wing and Sean Kelly was alert to avail of a short 45 to tap it over and increase the lead to two points.

The lead was short-lived as McLean hit over a point with a valuable assist from Slattery. Mayo would finish the period with two Slattery points to leave them leading by 0-6 to 0-5 at the short whistle.

On resumption, Mayo got a great start. First Slattery pointed a free and then Mayo was awarded a penalty for a foot block, which was duly dispatched to the net by scorer-in-chief Slattery.

Though Leitrim was now five points in arrears, they were undaunted. They would go on a mini scoring spree that would net four unanswered points.

Paul Ellis led the way with a pointed free after appeals for a penalty were denied.  JP Kelly followed with another point with an assist from Eoghan Hannon. Then two frees from Paul Ellis left just a point between the sides entering the last quarter.

Mayo stormed back as a run down the wing by Daniel Jackson ended in a foul and Slattery sending over the resultant free.  Mayo’s chances got a major boost when a second penalty was awarded when Marcus Hannick was dragged down.

Leitrim went wholeheartedly on attack but wasted several chances when points would have been viable options.  Kelly did put over a point before Leitrim were awarded a close in free. Paul Ellis blasted the ball through a packed goalmouth to reduce the deficit to two points.

Mayo staunchly repelled late attacks and went on a counter-attack.  James Maughan sent over the last point as the buzzer sounded to win by a goal.

Overall Mayo were deserving winners as they maximized their chances. Leitrim committed too may infringements and duly paid the price from penalties and frees, while they lacked sufficient firepower upfront with over-reliance on Paul Ellis’s scoring exploits.