The son of a Magdalene laundries inmate, a man born at the Tuam mother and baby home talks about their shattering experiences and the shadows they cast over two long separated lives. 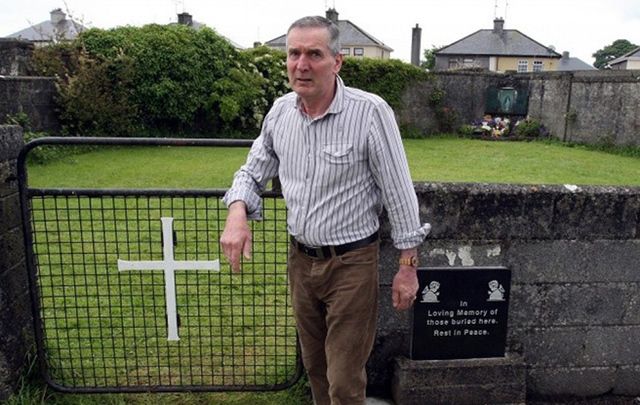 John Rodgers, whose books chronicling his mother's life as a Magdalene Laundry inmate and his own as a foster child are available on Amazon.com.

When John Rodgers’ mother was two and a half years old she was charged with begging on the streets of Dublin and sent by a chief justice to an industrial school. Released at age 16, she was raped and later gave birth to her son John, for which she was sent to the notorious mother and baby home in Tuam. Rodgers tells Cahir O'Doherty about their shattering experiences and the shadows they cast over two long separated lives.

When John Rodgers’ mother Bridie was two and a half years old she was arrested for begging on the streets of Dublin. A judge decided the best thing to do to reform her character was send her to a remote industrial school, where it was stipulated she would remain until her 16th birthday.

On release she was raped and became pregnant, whereupon she was sent to a home for unmarried mothers. It was one of the worst – the notorious mother and baby home in Tuam, Co. Galway, the place made famous by historian Catherine Corless in 2014 when she discovered 796 children had been buried there in a mass, unmarked grave.

Two books now tell Rodgers’ story in detail – "For the Love of My Mother" and "Eggshells and Broken Dreams." When you talk to him, however, you realize that this is a conversation that will likely never end. How do you experience that much human misery and expect to climb out of its shadow?

The cruelty of the Magdalene laundry system was best seen in the work itself, because as you were being set to work washing other people’s dirty laundry you were being hung out to dry yourself.

For the Magdalene women washing was work but it was also a metaphor: they were paying their keep and atoning for their sins at the same time. As carefully crafted systems of oppression go, it was both clever and watertight.

Women working at the Magdalene Laundries.

“I was born in the Tuam mother and baby home in 1947 and I remained there until 1953,” Rodgers tells the Irish Voice. “Six years. Enough to remember the place. Over time I tried to push the memories away, particularly in the early years.”

There were two things that shaped his life and his pathway. He was with his mother for a year and a month at the start of his life.

“I just have to assume I bonded with her. Then the nuns forcibly separated us and I was put into the children’s home in Tuam (a separate wing from the mother’s quarters). My mother was put into the laundry in Galway. I had to deal with her loss then.”

Each day in Tuam he had different caregivers. Different nuns, different lay minders and no real sense of security. That impermanence was physically reflected in his playmates.  One day they’d be there and the next they’d vanish; some were adopted, others died, he says. Sometimes the fear he felt left him unable to talk to anyone. It left him slow to trust others. It turned him inward on himself, he says.

Nuns caring for children at a mother and baby home.

“When I was fostered out to an elderly couple at the age of seven it represented the second breaking up of my childhood,” Rodgers says. The introduction went bumpily, and he refused to speak to them for five days.

“I heard them have a fierce argument one night saying they were going to send me back to the home. There’s clearly something wrong with him, they said. He doesn’t talk.”

Looking back, Rodgers now actually thinks he was very fortunate. His foster parents were fine, upstanding people. “They taught me right from wrong,” he says.

What followed were years of hard work on the farm and something new for Rodgers: a bit of stability.

But that stability was broken one day in late summer when he was 14.  Returning home from the turf cutting, he saw a strange woman sitting in his kitchen.

“It was my mother. She had climbed over the wall at the Magdalene laundry and had escaped. I was horrified. I didn’t know her. I had no idea who she was and yet here she was.”

To Rodgers she looked like an escaped convict. “I have a foster mother now and this woman – well, I don’t know her – and she must be someone of ill repute because she says the police will be looking for her already, as will the priests and nuns.”

For his mother Bridie it was harrowing to see the shocked look on her son’s face. She was 34-years-old, she had spent 30 of those years in Irish institutions, the nuns had taken her freedom, they had taken her child, and now in a final act of treachery it looked like they had taken his love too.

Rodgers’ foster father had some stark advice for Bridie that night. Run to England and run fast, he warned her. He wouldn’t turn her in he said, not even if they police came around asking questions.

“It had a major effect on me for the rest of my life,” he confesses. “I didn’t see her courage then. I didn’t see how wily she had been to make her break for it.

“She had to wait till the time was right. She had to store a few pounds in her pocket, she had to send secret messages with help from the laundry drivers, she even had the address of a former Magdalene inmate in Northampton in England that she could stay with when she escaped.”

Rodgers was dumbfounded. He wasn’t able to have any kind of conversation with her. Growing up, no one would explain to him what a Magdalene asylum even was. The name of seemed to conjure stigma and shame he says.

“The word asylum suggested mental illness to me, the inability to function in normal society, a weird place,” he remembers.

What happened to Rodgers in his teenage years and in his twenties is typical of a person who had their childhood upended. He drifted.

“I spent years as a nomad,” he says. “I was always drifting. I was always out of a job. I had more jobs than hot dinners. I couldn’t hold one down. I felt I was cut out for something better, but I couldn’t better myself.  I had no confidence.”

His early experiences had left him feeling inferior, and there was no shortage of unscrupulous companies and individuals willing to take advantage of the fact. It made him vow to himself never to trust anyone again.

For the next 15 years he kept to himself. It was a classic abuse cycle.

Eventually he met a good woman, settled down and started raising a family, but a few years later he started having nightmares about his mother.

“She was going through the bins in London in my dream. I said to my wife, ‘Either I’m cracking up or this is a message.’”

So he traveled to England that night. He was 40.

“I wondered if there were many more bastards on the train besides me. The world must be full of them.”

It took him a long time to find his mother, but eventually they were reunited. She had married an Englishman and they soon returned to live in Ireland, close to her son.

“She would get together with some other Magdalene escapees. I have never met finer women. When they heard I wanted to write they urged me to write about their lives. ‘Lookit John, I hope one day you tell our story because we were slaves and there was no escape,’ they’d say.”

For 10 years mother and son lived side-by-side and grew close. But like many women from that era, Bridie could never offer a bad word about the people who had incarcerated her.

“I do think they were brainwashed that they were sinners, fallen women,” Rodgers says.

The only sign that something had unmoored her was her insistence that she had started seeing ghosts. A priest would appear in her house late at night and terrify her she said.

She was in her sixties by now. Her husband started quietly talking of committing her. A trip to a medium in Dublin helped calm her, and a few years later she passed on.

The contradictions have stayed with Rodgers, though.

“One time I was out with her in the city center. ‘Oh God,’ she says, ‘here comes so and so. She doesn’t know I have a son; I’d be ashamed to tell her. Let on you're a family friend.’”

Rodgers asked her after, why would you be afraid? “She said, ‘Oh no, I couldn’t. I didn’t even tell my husband that I’d been in the laundries.’”

All things considered, Rodgers still says he feels lucky. For 10 years he got to bond with his mother. Thousands didn’t.

“She was a whizz with money. She was great with music. Ah, she could have had a great life, if someone had given her a chance,” he says.

"For The Love of My Mother" and "Eggshells and Broken Dreams" are available on Amazon.com.