Morrison warns of tough times for undocumented Irish in US 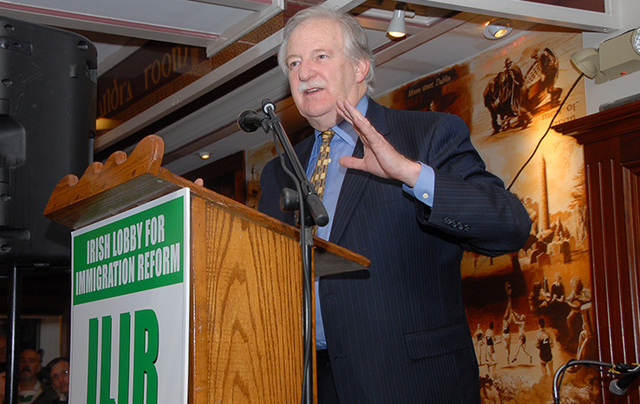 He was the creator of the last visa program that provided tens of thousands of green cards to Irish citizens, but former Congressman Bruce Morrison says those days are over under the new Trump administration, and anyone in the U.S. without legal status should prepare for difficult times ahead.

Speaking to the Irish Voice on Monday, Morrison said that going forward, the undocumented will have to be “on their guard” more than ever before given Trump’s focus on immigration which is proving to be even more intense than he promised on the campaign trail.

Back in 1991, things were vastly different.  The three-year Morrison visa program that granted nearly 50,000 green cards to Irish natives – including those living undocumented in the U.S. – was coming on stream.  Any such deal in the days of Trump is impossible to contemplate, Morrison says, given the administration’s rigid focus on enforcement measures which were confirmed on Tuesday with the release of documents from the Department of Homeland Security detailing how the administration is going to ramp up enforcement on a scale never before seen.

“I’ve talked to the key people on the House and Senate Judiciary committees, on the Republican side, and they are not interested in talking about anything but enforcement,” he added.

“There’s not going to be any legislation in the short run.  It may be that after a while there will be some softening up and some moves, but we really don’t know if they’ll ever decide to legalize anybody.  Anything that passes Congress now is going to be enforcement oriented.”

The undocumented have been on edge like never before since Trump took office, and the now confirmed reports of his administration beefing up agencies like U.S. Immigration and Customs Enforcement (ICE) to increase deportations across the board have only added to their worries.

How should the undocumented conduct themselves given the new realities?  Extremely cautiously, Morrison warned.

“Obviously they cannot commit any crimes or do things that call attention to themselves.  That’s always been true, but it remains more true than ever before since the administration seems to be picking up people indiscriminately,” Morrison said.

Read more: Immigrants are not US’s problem and policy makers already know this

Though ICE isn’t targeting the “average” out of status person -- one who has lived here without incident – Morrison says it’s clear that the administration won’t be especially concerned if such people are caught and detained.  “If ICE comes to a worksite where they are looking for somebody who has a criminal record they might not care who else they find,” he warns.

“There’s nothing that can be done about that. People need to keep their head down. And if they come, just leave through another door. Don’t be a sitting duck, and don’t hang around with people who have problems with the law.”

Undocumented residents looking to secure legal status remains as difficult as ever, Morrison said.  He is aware that people marry U.S. citizens but doesn’t recommend the strategy because it’s high risk.

“Of course you know that people do it but it’s risky. They get divorced then and marry someone else…people are looking for a legal option,” he added.

The bleak road ahead for the undocumented comes courtesy of all those who voted for Trump, Morrison said, including a large number of Irish Americans.

“People thought that Trump’s immigration positions weren’t about Irish people. They thought he was talking about Mexicans. They’re going to find out otherwise, that his positions will affect everyone.”

Perhaps at some point in the future, the administration might consider legalization actions, “when they realize the magnitude of what they’re trying to do and get a lot of blow back for disrupting the economy,” Morrison offered.

“Then they might be open to ways of doing things.  But nobody should be under any illusions that in a few weeks or months it’s going to be any different than it is now. Trump’s policies are going to be around for a long time.”