In Queens the threat of immigration raids grows

Anxiety has gripped the Hispanic community and many suspect the Irish undocumented could be next. 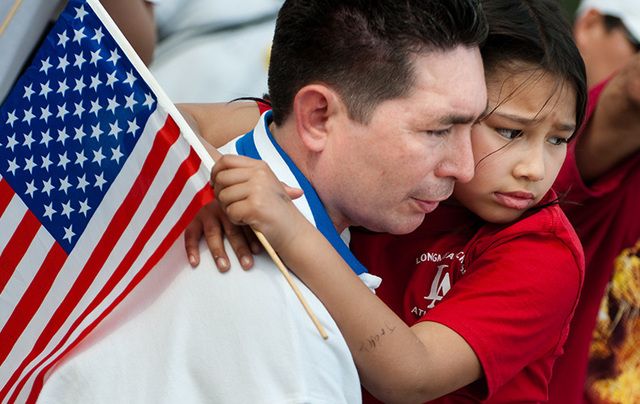 Anxiety has gripped the Hispanic community and many suspect the Irish undocumented could be next. iStock

Is it accurate to call the latest immigration raids on the undocumented a crackdown? Like most things in life, it depends on who you ask.

When I asked the nice Mexican lady who runs my local corner store in Queens how she was doing the other day she teared up. Her community feels singled out, she told me. They feel like the ax could drop on any of them at any moment, she said.

I was expecting to exchange simple pleasantries, but I ended up bearing witness to some ice cold human desperation. For her the raids aren’t a dry political debate over purpose or intent, they’re just a terrifying reality.

How am I supposed to live with that deportation threat hanging over me – and everyone I know – she asked me? What happens to my family in Mexico if I get deported and I stop sending some money home?

Back in Mexico there are gangs and crime and corruption, she told me. America is her only  chance to get ahead of the shadows that were waiting for her everywhere she said. America once offered her hope, but that hope is now fading.

"What is different about these latest immigration raids and those ones under President Obama?" I asked her?

"What’s different is the way Trump talks about Mexicans," she said. "He says we’re rapists and murderers, bad dudes and bad hombres. He’s turning us into the enemy. That means no one will stand with us. We all feel very much on our own," she said. That’s his plan, she said.

Immigrant communities have been on high alert and are bracing for increased enforcement that Trump has called for https://t.co/S9seEuTpLc

I couldn’t argue with that. A cosseted plutocrat has come to power and the people who are feeling the worst effects of it are on the nation’s lowest social rungs, the poor and the most vulnerable.

Reports at the weekend said immigration agents have arrested 600 people across the US in one week. And the fear that’s creating among the undocumented here in New York was increased when they learned that even people with green cards were being refused entry at the nation’s main airports, something previously unheard of.

The fear has reached such a point that many immigrants are now afraid to go to church or the hospital or even send their children out to school. If that isn’t an unprecedented crackdown it certainly feels like one to the people most affected, the woman told me.

At the Irish immigration centers in New York they have seen a marked rise in the numbers seeking to adjust their status or apply for citizenship since the inauguration. So much so, in fact, that there is currently over a month long wait to see an immigration counselor in the Queens office.

The anxiety that has gripped the Hispanic community has spread and many suspect the Irish undocumented could soon find themselves targeted by raids too.

“We are hearing about isolated raids that have been made in the community,” Emerald Isle Executive Director Siobhan Dennehy told IrishCentral. “We’re very much in communication with the New York Immigration Coalition (NYIC) and obviously the recent arrest and detainment of fourteen individuals in the New York area has put incredible stress on the immigrant community in New York at large.”

“To our knowledge, at this point we are not aware of any Irish that have been detained, but people are concerned and we are encouraging everyone to check in with us. We can tell them what their rights are. And if they hear of anyone who has been detained to let us know. Because the last thing we want to have happening is fear-mongering in terms of stories going out.”

Asked if the latest raids represented a crackdown, Dennehy demurred. “It is a targeted enforcement operation. I don’t know if it’s crackdown per se. There have been ebbs and flows in terms of the number of individuals that have been detained. In the New York this is not unusual. But in recent times, the executive order that Trump signed is having a chilling effect on people that it has come that close.”

“Irish people are reaching out to us to double check queries about their status they may have had before. They want the most current information. We’re telling everyone to know their rights in advance (they can view them on our website). If ICE agents come to you home make sure they identify themselves to you. Do they have a warrant signed by a judge? That’s the only way you would allow them into your home. Make sure you have a plan.”

At my local corner store the Mexican lady had a question for me. "How is Trump making America great again by deporting the undocumented immigrants that help make its economy run? No one else will work here for what they pay me," she said. "This place will close and then what?"

I had no answer for that, but worryingly it seems neither do many of the people who have been targeting her community. This woman works hard, she pays her taxes, she is clearly a productive citizen. What will it profit us to send her packing?

“The raids that we have been hearing about have been very widespread. We’re talking about Long Island to California. I could understand anybody feeling vulnerable right now based on what they’re  hearing,” says Dennehy. “We want to keep the fear-mongering to an absolute minimum. But the fear is there that people can be picked up.”

Taoiseach (Irish Prime minister) Enda Kenny will meet with Trump for the first time on St Patrick’s Day in Washington. He has come under enormous pressure to address the plight of the undocumented Irish here.

Meanwhile, Fiona McEntee, a Dublin-born, U.S. immigration attorney living in Chicago, told IrishCentral: “It obviously is extremely concerning. When Irish people are here undocumented they need to talk to an attorney to see if there’s anything they can do adjust their status,” she said.

“For those who don’t have that luxury the advice we’d give them is don’t travel, keep the head down.”