If the President and his supporters get their way a 21st century Thomas Francis Meagher would never get into America. 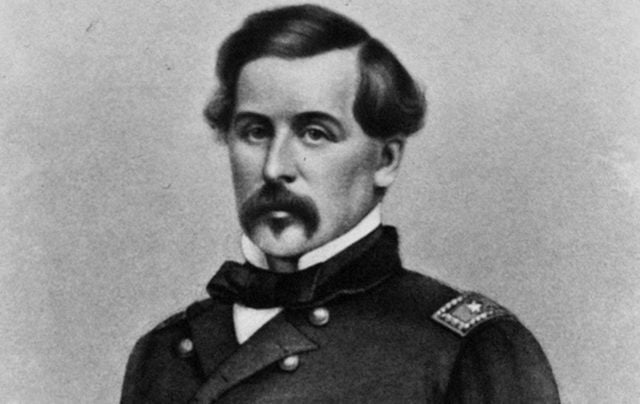 This has been a very awkward St. Patrick’s party and parade season.

Every weekend this month, there are parades in towns and cities across the country.  The pipers are piping, the drummers are drumming and the dancing girls with the curls are oh so cute.

But hovering over the parades like a bloated orange cartoon-character float is our president.  He has achieved the admittedly not-very-difficult task of setting the Irish against each other.

So, all along parade routes, and at the parties that follow, Irish Americans are advised to avoid the topic of politics.  Best to discuss, say, Irish heritage and how important that was to grandma and grandpa and the many other Irish immigrants like them.

Too late.  The fighting has begun.

Maybe it’s for the best.  Maybe we need a good old rumble, like the one at the end of The Quiet Man, to just get all of the bad blood among Irish Americans out in the open.  Because things can’t really go on like this much longer.

Recently the president infamously accused President Obama of tapping his phone.  Somehow, that was only the second most absurd thing Trump said.

“Irish Americans have made an indelible mark on the United States,” the president’s long-awaited proclamation on Irish American history month begins.  “From Dublin, California, to Limerick, Maine, from Emerald Isle, North Carolina, to Shamrock, Texas, we are reminded of the more than 35 million Americans of Irish descent who contribute every day to all facets of life in the United States.”

All well and good.  Nothing exciting, so far.

“From our four Irish-born Founding Fathers to Thomas Francis Meagher, the Irish revolutionary who became an American hero after leading the Irish Brigade during the Civil War, Irish immigrants have shaped our history in enduring ways.”

Hold it right there!

Thomas Francis Meagher pretty much represents everything Trump -- and all of his Irish American supporters -- despise.

If Trump and his supporters get their way a 21st century Thomas Francis Meagher would never get into America.

Meagher was, after all, a member of a religious minority who was born in a country prone to violence.  Meagher himself was willing to engage in political violence.  That’s what got him in trouble.

At a time when political violence was sweeping the globe, Meagher and his comrades in Tipperary organized a revolt against British rule in Ireland.  The Young Irelander Rebellion, as the uprising came to be known, failed and Meagher faced execution.  The sentence was eventually downgraded and Meagher was banished to the penal colonies in what would become Australia.

Meagher, though, was not one for following rules so he escaped.  Of course, he could not go back to Ireland.  He was a man without a country.

You know, a refugee!  The kind of dangerous troublemaker Trump and his vice president, Mike Pence, have targeted as the most dangerous threat facing America.

And yet, somehow, America survived the menace of Thomas Francis Meagher and others like him.  Meagher became a celebrated Civil War general.

The charge of the Irish Brigade under Thomas Francis Meagher.

But that’s not all.  He did something many Trump-supporting Irish Americans believe only today’s immigrants do.  He did not become 100 percent American, leaving his native nation behind.  He remained committed not only to Irish affairs but even to violent radicalism.

So many Irish Americans buy into the nonsense that their ancestors became perfect Americans once they passed through Ellis Island, while today’s immigrants are disloyal ingrates.

But what is really ungrateful is reaping the benefits of an immigration system that supposedly made America great, then scapegoating that system when other people -- even radical refugees -- try to use it.

And it would be funny if it were not tragic that, next weekend, many Trump-loving Irish Americans will be grumbling about immigrants while standing at a parade celebrating immigrants like Thomas Francis Meagher.