Leo Varadkar’s minor revolution - a shift to right of center

The election of Leo Varadkar as the new leader of Fine Gael and therefore our next taoiseach marks a minor revolution in Irish politics -- with the emphasis on the word minor. 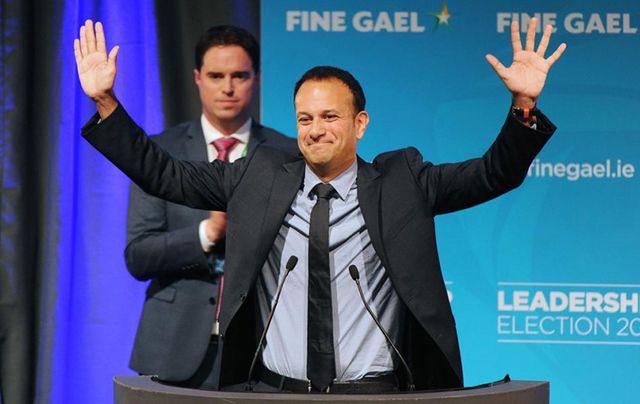 The election of Leo Varadkar as the new leader of Fine Gael and therefore our next taoiseach marks a minor revolution in Irish politics -- with the emphasis on the word minor.

It's not a minor revolution just because he happens to be gay or has an Indian father, even though both of those factors are indications of the more inclusive and modern Ireland we now live in.

The more revolutionary aspect of the arrival of Varadkar as the new leader of the country is that it marks a recognizable shift to the right in Irish politics.   The change may be minor -- from left of center to right of center -- but it is important  nonetheless.

And it is a shift that many people here -- not just the Fine Gael party members who voted for him -- feel is overdue in a country with too much political correctness and too many state handouts funded by high taxation.

'I feel like we are going in the right direction', says Varadkar after meetings with FF and Independents https://t.co/sDfSVHnzom pic.twitter.com/IFCHzNYTUi

Varadkar’s identification of that changing mood in Ireland and the clever way he played into it was one of the main factors in gaining him victory.  In contrast with his leadership rival Simon Coveney's pious expressions of concerns for the less well off, harking back to the more liberal Just Society policies of Fine Gael a few decades ago, Varadkar’s lines in the campaign were a conservative breath of fresh air.

The tell-it-like-it-is, outspoken, unapologeticaly conservative tone of his campaign was nothing new for him.  It's been an aspect of his political make-up from the beginning, right from the time he joined Fine Gael while he was still in school.  It's why his detractors started calling him "Tory Boy.”

Of course Varadkar is personable and articulate as well as being conservative. And being gay and the son of an Indian doctor and an Irish mother who was a nurse has been an advantage rather than a hindrance.  It made  him a bit different and therefore more interesting than the other pretenders to the Fine Gael crown -- and standing out from the crowd is essential for any politician with ambition.

'We will not block Leo': FF will back Varadkar for Taoiseach says Martin https://t.co/2CPBB5Akly pic.twitter.com/lOyj1930QZ

It was this slightly exotic box office appeal that Varadkar offered that had so many of the Fine Gael parliamentary voting for him.  Probably with good reason they felt that in contrast with the serious but slightly dull Coveney persona, it gave them the best chance of presenting a fresh face to the electorate and thereby holding onto their seats in the next general election.

Read more: Your guide to the snap British election and why it’s so important for Ireland

All that is true, but Varadkar’s perceived conservatism was the key underlying factor.  And as we said above, this is something that is not new, going back to early in his political career.

As a new arrival in the Dail, for example, despite being the son of an immigrant himself, he proposed that migrants here should be paid to leave the country.  He also suggested at one point that criminals with assets should have to pay for the considerable cost of keeping them in prison.

So some of the mildly controversial comments he made during the leadership campaign are nothing new.  Like the comment that he wanted to lead a party for “people who get up early in the morning,” which sounded like a veiled dig at welfare scroungers.

He clarified this later by saying that he wants Ireland to be a country that rewards work.  “I want Ireland to be a country that rewards people who work hard, who want better lives for themselves, for their families, for their communities. And that of course includes many forms of work, it’s not just paid employment. There are a lot of people, for example who get up very early in the morning because they’re carers, or because they’re parents.”

However, despite the clarification, the message was clear and it is one that chimes with a lot of people here.  Similarly, his proposal to ban essential state sector workers from going on strike will have gone down well with workers in the private sector who look with envy and irritation at the high pay and guaranteed pensions enjoyed by many state workers and resent their campaign for "full restoration" of the amount they lost after the crash.

The point is that no one is offering the private sector workers -- who pay for everything with their taxes -- much restoration, and most of them have lost their pensions.

Varadkar’s comments have angered the state sector trade unions, but the public silently agrees with him.   The chaos caused by the transport strikes and teacher strikes and the outrageous pay hike given to the gardai which has set other state workers off on a pay campaign are all deeply unpopular.   It was time for someone to cry halt, and Varadkar deserves credit for doing so.

But more than anything, it was his comments in support of  the "people who get up early in the morning" which are being taken as the best indication of the conservative slant a Varadkar-led government will have.  He pointedly talked about the squeezed middle class here who pay for everything but qualify for little or none of the free stuff provided by the state.

He said there are a lot of people here who believe they should not have to pay for anything, and that bondholders and billionaires can be forced to pay for everything.  "They think there should be free education, free healthcare, free housing, but they shouldn’t have to contribute to it,” he said.

But in the real world it's not like that, and the ordinary taxpayer ends up with the bill for everybody else -- the ludicrous situation on water charges is just one example.

Varadkar’s relatively short record as a government minister bears out his right of center approach.  He oversaw the introduction of free health care for young children, but that was a policy which had been pushed through by his predecessor.

More significantly, he abandoned the introduction of free universal health care supported by mandatory insurance, a version of Obamacare, because he reckoned that it was not financially possible to make it work at this stage.  And he is probably right.

Since escaping from the Department of Health Varadkar has been minister for social welfare, and has attracted a lot of criticism from those on the left for calling on the public to report cases of welfare fraud they see in their communities.   This may have caused outrage among the liberals, but there are far too many people here who have become expert at gaming the system and everybody knows it.

With unemployment down from over 15 percent after the crash to less than seven percent now, there are opportunities for most people to find work.  But the whole welfare system, including free health care, subsidized housing and many other benefits, as well as unemployment pay which is far higher than in the U.K., for example, makes too many people here reluctant to get out and find a job and pay their own way.

In some communities with high long-term unemployment, the idea of "getting up early in the morning" and going out to work for the day is seen as stupid when it is possible to game the system and end up with the same or even more.  Varadkar seems determined to cut through that, and if he does most people here will be behind him.

Even his comments from his early political days about paying migrants to return home seem relevant in the current climate.  The asylum system here, with its endless appeals funded by free legal aid (paid for by taxpayers) means that migrants can stay in the system for seven or eight years or even longer.  By which time sending them back becomes far more difficult, even though more than 90 percent of those who come here are economic migrants rather than people whose lives are in danger in their home countries.

The most refreshing thing about Varadkar is his lack of political correctness, and many people here are now hoping that continues when he is in power.

All of that makes him Fianna Fail's worst nightmare.  In comparison with the Fianna Fail leader Micheal Martin, who is tainted by being part of the governments that caused the crash, Varadkar is a breath of fresh air.  He may well cut and run for an election later this year to solidify his position in the Dail.

There are interesting times ahead.