Brexit negotiations will have a greater impact on Ireland, than any nation apart from Britain. 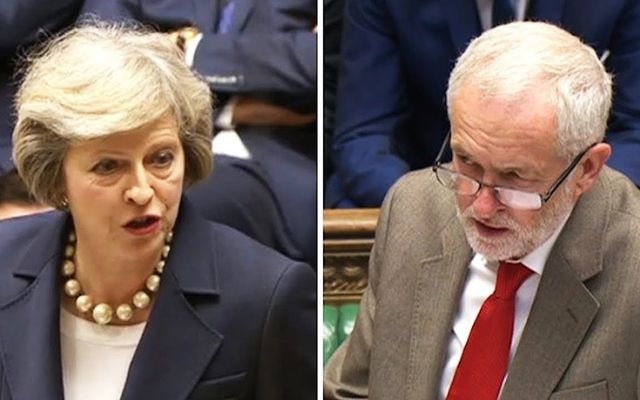 Politicians will frequently stare at the lens of the TV camera and tell voters that this is the most important election in their lifetime.

True to form, British Prime Minister Theresa May has honored that tradition during the current campaign, but few doubt that tonight’s results are significant.

And other than for Britain herself the results today's United Kingdom election will matter for Ireland more than any other country.

The Brexit (the UK’s exit from the European Union) negotiations will dominate the Irish political agenda for the next two years and be talked about for decades after.

That Britain would actually go through with Brexit was a matter of some debate in Brussels after the referendum. Europeans have voted against further integration in referendums a number of times, but on each occasion have been overruled or ask to vote again.

It is now clear June 23, 2016 was not one of those occasions and the manifestos of both the two main parties, the Conservatives and Labour, commit themselves to leaving the European Union.

Theresa May made it clear earlier this year that Britain would also leave the Single Market and the Customs Union. The Irish Government had hoped Britain would not leave either, but May is keen to end the automatic right of EU citizens to live and work in Britain – the right to freedom of movement is a key plank of single market membership.

Instead, the Conservatives have pledged “to ensure our departure is smooth and orderly and to agree a deep and special partnership with the 27 remaining member states.”

In common with Dublin and the EU’s negotiating team, May seeks to avoid a hard border between the north and south of Ireland. Indeed, a desire to minimize disruption to the border region is one of the few areas of strong agreement between the Conservatives and the other 27 EU countries.

The current border with Northern Ireland. What could a hard Brexit mean?

Labour have also pledged to “ensure there is no return to a hard border between Northern Ireland and the Republic of Ireland” and will replace any EU funding for peace projects with money from Westminster.

Significantly for Northern Ireland, Labour has also promised to devolve powers returned from Brussels – such as those over farming and fishing – directly to the Stormont Assembly. The Conservatives, however, said that powers over agricultural subsidies might remain with London to ensure one part of the United Kingdom does not undercut another.

Read more: Who is Jeremy Corbyn?

The Labour manifesto also says in negotiations with the EU over Brexit the party will seek a “strong emphasis on retaining the benefits of the Single Market and the Customs Union.”

The UK's decision to leave the Single Market could provide an advantage to Ireland if businesses currently based in Britain decide to relocate to Ireland in order to maintain easier access to the European market. However, it will also free Britain to strike free trade deals with other countries around the world and concern has been voiced that this will undercut Irish trade with Britain.

The removal of trade tariffs with other agricultural nations would mean, for example, lamb from New Zealand and Brazilian beef would sell at a lower price in British supermarkets – something Irish farmers would hardly relish.

Such an eventuality could perhaps be avoided in a hung Parliament where no party wins a majority of seats outright; both the Scottish National Party and the Liberal Democrats (the third and fourth party of British politics) have committed themselves to Single Market membership and could force the policy on Labour as the price of power in a hung Parliament.

Another key difference between Labour and the Conservatives is that Labour have committed themselves to reaching a deal with the EU.

Theresa May, however, has insisted that, “No deal is better than a bad deal” and the chance of a British walkout has been estimated at 50/50 by some Brussels insiders.

Most contentious is the bill for leaving – at one point it was estimated at $60 billion but it has recently climbed to $112 billion.

Brussels say this represents the amount for projects that Britain already committed to before it decided to leave. Others have suggested the sum has been inflated after member states made clear they were unwilling to make up the shortfall in the EU’s budget. May said that a bill of $112 billion is out of the question and suggested that it failed to take into account the billions of dollars worth of EU assets of which Britain has a share in.

Views on Theresa May - BBC Newsnight

“She’s the worst person in the world to do a deal… but if you come to her with a reasonable case, nine times out of ten she’ll back you” – Sir Eric Pickles on Theresa May

Her former cabinet colleague, Nick Clegg, said the 60-year-old pastor’s daughter often got her way in Government by arriving to meetings and “just sort of saying ‘no’ and then just sitting there and saying nothing. And I remember we said: What’s the point of having a meeting if you’re not prepared to talk?”

Who knows if such a technique will work in Brussels?

If a large sum is extracted from the British then it will save Irish taxpayers hundreds of millions of euros in the medium term. If the British walkout without a deal and without paying a fee, then EU spending will be slashed and/or Ireland will be asked to pay more money into the euro pot to make up the difference.

The Conservatives seem set on playing a significantly harder ball game on this make or break issue than does Labour.

All of which may be academic as most of the final opinion polls and feedback from activists on the ground suggest the Conservatives are on track for their best result since Margaret Thatcher led the Tories to a third term in office way back in 1987.

Labour is expected to pick up votes in safe seats it already holds where young voters are concentrated, but the Conservatives are confident of victory in seats they have not held in decades.

Whilst Theresa May’s popularity has dropped over the course of the campaign and Jeremy Corbyn’s has risen, the Prime Minister is still thought to be more highly rated higher by voters.

The Liberal Democrats had entered the election with high hopes they would make big gains in areas of the country with large numbers of voters who voted to remain in the EU. There is little evidence to suggest that will happen; leader Tim Farron spent the first week of the campaign dodging questions from journalists about whether he believed gay sex was a sin. Most of the voters the Lib Dems are trying to attract believe strongly in LGBT rights and it was far from an auspicious start to the campaign. Insiders still think they will pick up a number of seats they lost in 2015 but nothing like the gains they had hoped for a few weeks ago.

The SNP is bracing itself for a pyrrhic win – two years ago they scored a famous victory and captured 56 of Scotland’s 59 seats. After Scotland voted to remain in the EU last year First Minister Nicola Sturgeon declared she would hold a second vote on independence, arousing deep anger amongst No voters. The result has been the rejuvenation of the Scottish Conservative Party, once derided as a spent force but now tipped to unseat a swathe of SNP heavy hitters with their enthusiastic opposition to independence.

Labour and the Liberal Democrats too are expected to win back seats they lost in 2015 too and whilst the SNP are still tipped to win most seats, there is a sense that the tide is going out for the party.

Why would @GeorgeKerevan have to take an advert out in his local paper to try and tell people this election isn't about independence? 🤔🚨 pic.twitter.com/OM33EmrKmG

UKIP, the party that believes in Brexit more than any other, is expected to plummet in terms of vote share and lose its only seat in parliament. With the Conservatives set to deliver Brexit, UKIP's voters have flocked to support May’s party in their millions.

In Northern Ireland, the Democratic Unionist Party is expected to win the most seats, but Sinn Féin might just score more votes than its old adversary and former partner in government. Such an outcome would be a huge embarrassment for the party of Paisley and raise questions about the future of its leader, Arlene Foster.

Sinn Féin certainly surged in March’s Assembly election – fired up by Brexit and Foster’s controversial leadership – and the party is confidently talking up its chances of claiming the Fermanagh and South Tyrone seat from the UUP and Foyle, currently held by the SDLP.

Once the dust has settled there are two important dates to keep in mind: June 16 when the Prime Minister will head to Brussels to begin negotiating the details of the divorce and June 29 when a new power sharing arrangement in Northern Ireland must be agreed to.

Walkouts have been predicted for both meetings, but by then there will be nothing voters can do except sit and watch.