Knight time for Biden and Harris?

Was Kamala Harris' Knights of Columbus "gaffe" a sticking point for Joe Biden? 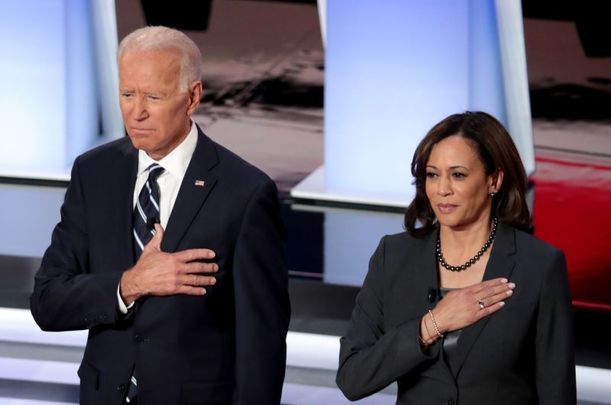 Joe Biden and Kamala Harris at the Democratic Presidential Debate at the Fox Theatre July 31, 2019, in Detroit, Michigan. Getty Images

Tensions are simmering between Joe Biden's campaign and Kamala Harris.

*Editor's Note: This column from Tom Deignan appeared in the August 5 edition of the Irish Voice newspaper, sister publication to IrishCentral.

That must have been an awkward moment!

No, I'm not talking about the simmering tension between Joe Biden’s team and Senator Kamala Harris that boiled over this week. As Politico reported, allies of Harris met with Biden’s campaign staff “after a leader of his vice presidential vetting team was quoted doubting whether she’d be a loyal” vice president.

True, I’m sure that was also kind of awkward.  But I’m talking about a different awkward VP moment.

Read More: Is New York’s Cardinal Dolan out of order over Trump flattery?

Not long ago, Harris seemed to be the odds-on favorite to be Biden’s veep pick. She was a fresh face, not to mention a woman, and hadn’t Biden vowed a long time ago to select a woman as his running mate?

But as the weeks went on, Harris seemed to drop out of favor.  Other candidates have risen to the fore, so much so that the vice presidential selection process itself is becoming a bit of a story.

A Fox News headline the other day suggested Biden was “dithering,” and even the more friendly confines of The Washington Post used the word “delay” in a headline about Biden’s VP prospects.

Take it easy, folks. Biden himself was not named Barack Obama’s running mate until August 23.

So, back to this awkward moment. You know how Biden likes to portray himself as a politician of the old school variety. An Irish Catholic backslapper and baby-kisser -- at least back in the pre-Covid days when you could slap backs and kiss babies.

This is not exactly hip or fashionable, but that’s kind of the point. It’s all part of Biden’s appeal.

So it must have been a little awkward when Biden sat down with Harris and brought up that whole Knights of Columbus thing. You might recall back in early 2019, there were reports that Harris had concerns about a fellow by the name of Brian Buescher, who was up for a federal judge’s seat.

“Were you aware,” Harris asked Buescher, “that the Knights of Columbus opposed a woman’s right to choose when you joined the organization?”

Harris also said, “Have you ever, in any way, assisted with or contributed to advocacy against women’s reproductive rights?”

And added, “Were you aware that the Knights of Columbus opposed marriage equality when you joined the organization?”

As the Post’s Michael Gerson later wrote, “For those who know the Knights of Columbus, this is a bit like accusing your Aunt Harriet’s knitting circle of being a Mexican drug cartel.”

Either way, sooner or later, Biden and the Democrats are going to have to deal with Harris’ kind of thinking. It is more than a little ironic that at a time when so many people are talking about statues and history, bigotry and symbolism, Harris would make such a monumental gaffe.

It would be simple-minded and silly to dismiss Harris merely as an “anti-Catholic bigot.” But she, like lots of other liberal, open-minded folks, can rightly be called “intolerant.”

That’s a word that gets used as a synonym for bigotry these days, but it really is entirely different. There is a certain kind of Democrat that, on the one hand, goes on and on about things like diversity and multiculturalism, yet is openly dismissive and contemptuous -- yes, intolerant -- of some cultures.

It is even more ironic that the group in question was founded to protect Catholics from bigotry. And it is more ironic still that Harris and other Dems might still gleefully bash the Knights, not only because they reflect Catholic social teaching on abortion and marriage, but also because they are named after a brutal colonizer.

This is indeed a debate worth having. But Harris, like too many others, was not interested in having a debate.

Debates require tolerance. Not much of that around these days.