Is New York’s Cardinal Dolan out of order over Trump flattery?

Cardinal Timothy Dolan recently offered an invocation at a speech given by Trump administration Secretary of State Mike Pompeo. 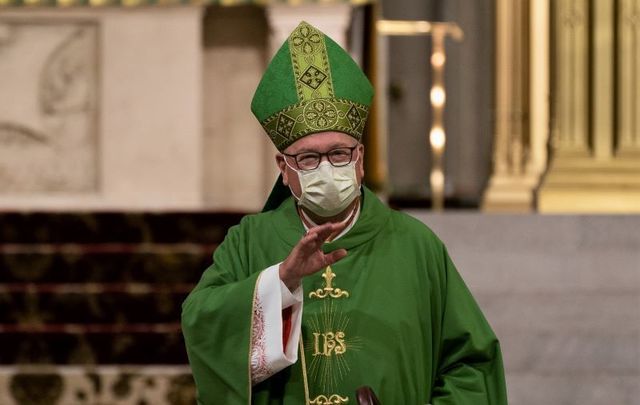 Earlier this month, the national Ancient Order of Hibernians released a statement about what they described as an uptick in anti-Catholic vandalism, after a Florida man drove a vehicle into Queen of Peace Church in the Ocala section of the Sunshine State.

“The Hibernians are appalled at the conspicuous lack of national news coverage, particularly among the national broadcast networks, surrounding this blatant attack. The absence of national reporting concerning such an egregious attack against a Catholic church is at stark variance with past coverage of similar despicable attacks against other faiths,” the Irish American group said.

“This absence of coverage is particularly glaring given that this attack is only the latest in a wave of wanton destruction targeting Catholics including the vandalism of a Catholic church in Boston, a Catholic school in New York and the ongoing investigation of a fire that destroyed the historic 249-year-old San Gabriel Mission.”

The AOHers are basically mad that a great fuss is made when certain religious (and ethnic and racial) groups are attacked, but not others.

It’s a fair point -- barely. Of course, symbols that Irish Americans and other Catholics cherish should not be desecrated. But one reason the media tends to not cover this is because the Catholic Church is no longer viewed as a persecuted minority.

This is complex, given that thousands of nuns and priests and other Catholics spend their days tending to the persecuted and needy. Furthermore, in America, it has only been in the last 50 years or so that the children and grandchildren of impoverished Catholic immigrants have moved into the mainstream.

But the AOH may also want to look closer to home when it comes to why Catholics are no longer viewed as marginalized.

In mid-July, New York Archbishop Timothy Cardinal Dolan gave the invocation at a speech given by Trump administration Secretary of State Mike Pompeo.

It was just the latest episode featuring the Irish American cardinal, arguably the nation’s most prominent Catholic, cozying up to the Trump administration.

“(Dolan’s) public flattery of President Donald Trump from the pulpit of St. Patrick’s Cathedral and on Fox News may prove to be a moment from which American Catholicism cannot turn back,” Steven P. Millies wrote recently in National Catholic Reporter.

The article itself has a bizarre back story. Millies first wrote it for U.S. Catholic magazine, which then removed it from its website with no explanation. Perhaps because it’s hard to explain why Dolan is spending so much time with folks who use their power to demean immigrants, refugees, religious minorities, and the impoverished.

In other words, when America’s top Catholic shows an obvious preference for -- at least morally -- the most un-Christian administration in U.S. history, you can’t be surprised when some folks view Catholics as part of the problem, rather than part of the solution.

Does the AOH truly believe Donald Trump would have expressed sympathy for the very Famine Irish -- impoverished refugees, religious minorities -- the group was founded to uplift? Trump even got into an ugly war of words with Pope Francis!

It’s not that any prominent Catholic should always (or should never) align themselves with this political party or that. I’m sure the church genuinely needed at least some of that $1.4 billion in federal stimulus money -- approved by the Trump administration -- to pay its workers and fund charitable services.

Even as local schools close, and sex abuse victims fight on for justice.

You get such breaks when you cozy up to the powerful. Someone should simply remind the AOH there’s also a price for that.