Catholic churches and statues across the United States have been vandalized. 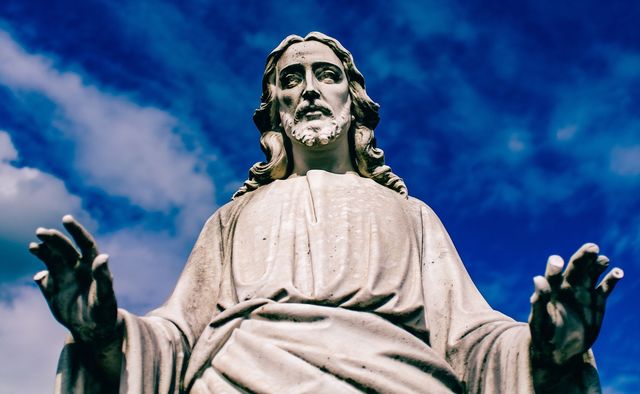 Statues and Catholic Churches were vandalized across the United States. Getty

The Ancient Order of the Hibernian has condemned the lack of national airtime these attacks on Catholic Churches have received.

A series of arson and vandalism attacks have been sustained by Catholic Churches and their property across the United States over the last week. The Ancient Order of the Hibernians, the United States' oldest Irish association, has questioned the "deafening media silence" over the attacks and whether the media "has double standards of newsworthiness when intolerance targets Catholics."

On July 10, the Diocese of Brooklyn announced that a statue of the Virgin Mary at Cathedral Prep School and Seminary in Queens. According to the Catholic Register, security footage shows "an individual approaching the 100-year-old statue shortly after 3 a.m. Friday morning and daubing the word “IDOL” down its length."

Fr. James Kuroly, rector and president of the Queens school, called this “an act of hatred.”

“Obviously, this tragedy saddens us deeply but it also renews our hope and faith in the Lord as he has shown his goodness in the many people who have already reached out to us,” said Fr. Kuroly.

“We are sincerely grateful for the help we have received as well as the prayers. Please continue praying for those who committed this act of vandalism and hatred toward Our Lady and the Church.”

On Saturday, July 11, at about 10pm, police were called to the scene of an arson attack on the Blessed Virgin Mary outside the church of St. Peter’s Parish, on Bowdin Street in Dorchester. Plastic flowers in the hands of the statue had been set on fire and suffered damage.

Currie said he was not angry but offered to help whoever had committed the crime.

"This is obviously someone disturbed, someone who has a lot of trouble, a troubled soul," he said.

"But I know our Lady in Heaven is looking down on the soul, or whoever it might've been, and saying, 'I love you! If you need help, come get help. We're here for you.'"

Fr. John Currie leans over to touch the Virgin Mary statue at St. Peter's Parish which was burned by vandals today on July 12, 2020 in Boston, MA. This is so sad 😔🙏 “Father, forgive them, they know not what they do.” - Jesus Christ @forthemartyrs pic.twitter.com/xYxxCTWcsF

Also on Saturday, the Queen of Peace Catholic Church in Ocala was attacked as a bipolar schizophrenic man who had stopped taking his medication, according to the Ocala Post. Anthony Shields (24) crashed his minivan into the church and set the building on fire while parishioners were inside preparing for Mass.

Shields was later arrested and charged with attempted murder, arson, burglary, and evading arrest, after reportedly admitting to crashing into the church and then setting it on fire.

In a statement, the Ancient Order of the Hibernians (AOH) said: "By the grace of God, all those who were in the church were able to evacuate safely, but there can be little doubt that this was a direct attack against those who were seeking to peacefully celebrate their Catholic faith."

Please pray an act of reparation as Our Lady Queen of Peace Catholic Church, the FSSP's community in Ocala, Florida, was intentionally set on fire after a man drove a vehicle through the front doors of the church. The suspect has been apprehended by police. pic.twitter.com/H3KQgSU0QC

Federal and local authorities are continuing to investigate the fire, on Saturday, that destroyed the roof of the San Gabriel Mission in the Archdiocese of Los Angeles. The Mission was being renovated as part of its 250-year anniversary celebrations.

"During the initial stages of the fire attack, firefighters were able to remove historical artifacts and some artwork from the path of the blaze," Fire Chief Steven Wallace told CNN. "

Once the heavy fire in the roof was knocked down, firefighters re-entered the old church and made a valiant stand to cut off the horizontal spread of the fire near the altar area, sparing items that date back to the late 1700s."

Agents from the federal Bureau of Alcohol, Tobacco, Firearms, and Explosives were investigating the possibility that the fire was an arson attack.

Here are some photos of a fire that tore through the San Gabriel Mission this morning. The Mission was founded by Junipero Serra in 1771. #SanGabrielMission #Serra #JuniperoSerra pic.twitter.com/EZctQj4B5S

The AOH condemned the "conspicuous lack of national news coverage, particularly among the national broadcast networks, surrounding this blatant attack.

"The absence of national reporting concerning such an egregious attack against a Catholic church is at stark variance with past coverage of similar despicable attacks against other faiths. This absence of coverage is particularly glaring given that this attack is only the latest in a wave of wanton destruction targeting Catholics including the vandalism of a Catholic church in Boston, a Catholic school in New York and the ongoing investigation of a fire that destroyed the historic 249-year-old San Gabriel Mission and over the same weekend.

"The Hibernians ask why such an outrageous attack targeting Catholics is less worthy of reporting than an attack on a house of worship of another faith or a public institution? The News Media needs to take accountability for its apathy and blatant double standard and the creation of a shameful 'hierarchy of outrage' in which hate targeting Catholics is not 'newsworthy'. "

They added "We would remind National News editors of the Latin legal maximum 'qui tacet consentire videtu' (silence implies consent); their silence on the rising tide of anti-Catholic violence is shameful."

Are you surprised at the lack of national broadcast news on these attacks? Let us know in the comments below.