Hochul is the first governor from outside New York City and its suburbs since 1932. That has allowed her to understand the unique problems of poorer parts of the state which include central New York and her district of Buffalo. 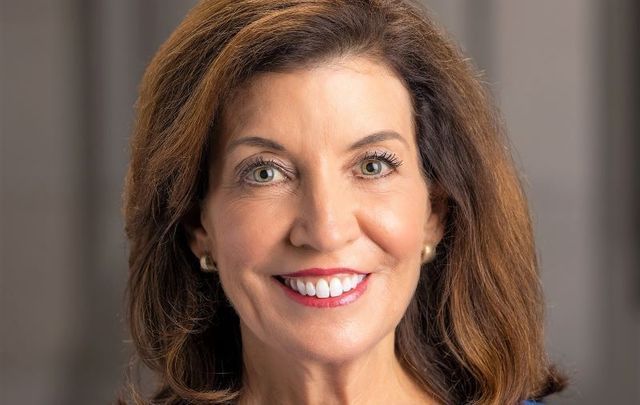 Kathy Courtney Hochul is in many ways an accidental governor. The first female in the history of New York State to become governor, she inherited the position when the former occupant, Andrew Cuomo, was forced to step down in the middle of his third term due to multiple allegations of sexual harassment.

Prior to that, Cuomo had made it clear that Hochul would not be his running mate as lieutenant governor when he ran for a fourth term this November.  She was supposedly looking for the position of U.S. ambassador to Ireland in return for stepping aside.

However, history had a different plan for Hochul.  When Cuomo resigned she took over the state at a critical time when Covid was still looming large and multiple related issues, such as reopening schools, had to be dealt with.

Hochul knows what it is to be poor. Her family, at one point, lived in a trailer on the outskirts of Buffalo, and her parents struggled to make ends meet.

She realized early on that politics and service to others was the way forward for her. She won a seat in Congress representing Buffalo in 2011 when she upset her opponent in a Republican-leaning district.

Now she is running for governor in her own right for the first time. And with a solid record of accomplishments behind her.

She was the leader of a task force on opioid abuse in New York, and she made key decisions on reopening schools during the Covid crisis.

She revealed herself as a tough fighter for women’s rights; before she entered politics she helped open a women’s homeless shelter in her hometown of Buffalo.

On the employment front, Hochul and President Joe Biden announced recently that 50,000 jobs will be located in the Syracuse area in the semiconductor business. It promises to be the largest investment in New York State jobs in a very long time.

Hochul is the first governor from outside New York City and its suburbs since 1932. That has allowed her to understand the unique problems of poorer parts of the state which include central New York and her own home district.

She is an accomplished legislator with both state and federal experience. And she has mercifully struck up a decent dialogue and working relationship with New York City Mayor Eric Adams, unlike Cuomo and Bill de Blasio who were constantly at loggerheads and couldn’t agree on which day of the week it was.

Hochul’s opponent, Lee Zeldin, could not be more different in tone and style. But most importantly, he cannot be trusted with accepting election results as he proved with his full-on defense of Donald Trump and his stolen 2020 election claims.

It was a disgraceful time in the political life of the United States, the attempt to turn the country against democracy on the whim of one would-be defeated dictator. Zeldin played right along with Trump and was one of four Republican House members in New York who voted against certifying the 2020 results in Pennsylvania and Arizona.

On the issue of abortion rights, anti-abortion advocate Zeldin claims that he cannot impact abortion decisions as governor.  But that is complete nonsense, as a governor makes many key appointments in the health care areas of a state.

Zeldin says that crime is out of control in New York City and state.  And for sure, there is no question that crime is on everyone’s mind.  But one can always rely on the Republicans to whip up crime and immigration in as racist a manner as possible coming up to election time.

Given how Hochul had handled the job of leading New York so far during a time of great tumult, there is no question that she is a better choice for governor of New York for the next four years.