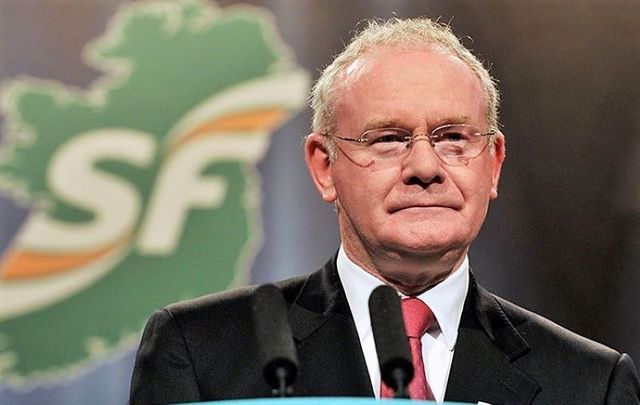 Jane Fonda is 82 years young and looks fabulous–she was, after all, the VHS aerobics queen of the1980s–but her memory might be a tad off when it comes to remembering her visit to Derry in 1976.

Plugging her new book "What Can I Do? My Path from Climate Despair to Action," Jane appeared via video on Ireland’s Late Late Show hosted by Ryan Tubridy last week, and the host asked her about a trip to Derry during which she and her late ex-husband, Tom Hayden, found themselves in the home of Martin McGuinness, the Sinn Féin icon who passed in 2017.

As Jane recalled, "We were looking for Gerry Adams and somebody directed us to Martin McGuinness’ home and my son, Troy, was with us and he was about six years old. I was married to the late Tom Hayden, who was Irish, so we were sitting in the living room and a body was carried in, bleeding a lot.

"It was The Troubles and it was short of shocking. Tom put some of the blood on his fingers and he said to Troy, 'Your forefathers, your forbearers, your people.’”

Whoa! It had been known that Jane and Hayden were in the North multiple times, but never that they were in McGuinness’ sitting room with a bleeding body.

Fiachra McGuinness, Martin’s son, took to his social media accounts to dispute her re-telling, and he supplied an oldie but goodie photo of his dad and the world-famous actress.

“Jane Fonda telling a different story from the one that actually happened. Here she is happy enough with my Father at his home,” Fiachra said.

Jane Fonda telling a different story from the one that actually happened.

Here she is happy enough with my Father at his home. #LateLateShow pic.twitter.com/5PEp2eKIlt

A veteran member of the IRA, Thomas “Dixie” Elliott, told The Belfast Telegraph that Fonda most certainly told a tall tale. "The idea that people stood by and let a stranger put his fingers into someone's body or their blood is ludicrous. That would have been the actions of a lunatic, and it would not have been allowed," he said.

Separately, veteran journalist Eamonn McCann told The Irish Times:  “It couldn’t have happened without people knowing about it. Martin McGuinness’s house is in the middle of the Bogside, in a highly-populated area just round the corner from myself.

"The idea that it could have happened without at the very least the neighbours knowing is just ridiculous.”