Irish and Irish American restaurant owners and staff were among the hundreds who participated in the #NYCRestaurants march and rally at City Hall on September 14. 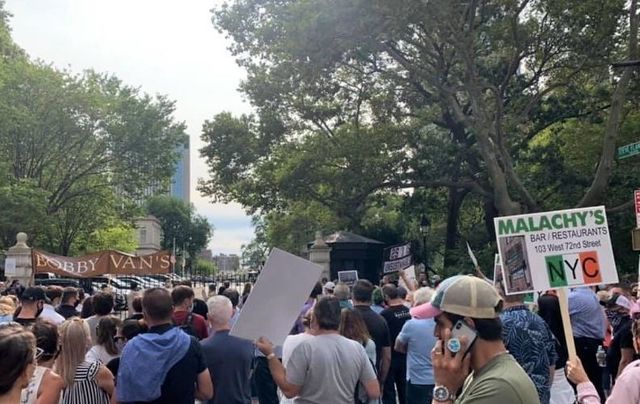 Irish and Irish Americans were out in force at the NYC restaurants rally and march in New York City on September 14.

Last week’s decision by New York Governor Andrew Cuomo and Mayor Bill de Blasio to finally re-open indoor dining at the end of the month in the city’s five boroughs at 25 percent capacity doesn’t go nearly far enough to help the restaurant industry which has been brought to its knees by the pandemic, according to business owners who rallied at City Hall on September 14 to urge greater action.

UPDATE: On September 30, indoor dining in NYC can resume at 25% capacity.

Strict restrictions will be in place. pic.twitter.com/ORzwGM67PQ

Hundreds of bar and restaurant owners, workers, and supporters–many of them Irish–marched to City Hall with placards saying “4 Out of 5 Restaurants May Never Reopen,” “Restaurant Genocide, de Blasio Out” and “25% Won’t Pay the Rent.”

Chanting “too little, too late,” “keep New York alive,” and “enough is enough,” speakers at the rally urged de Blasio to open the restaurants at 50 percent capacity which is allowed in every other area of New York, including the nearby suburbs of Long Island and Westchester.

“The mayor ran on a platform of a tale of two cities and not pandering to the one percent. Great, okay, well now is your opportunity to show us, Mr. de Blasio. Maybe the one percent dine in (restaurants), but they don’t work in them,” said Dubliner Mark Fox, one of the organizers of Monday’s event and the founder of Fox Lifestyle Hospitality Group, which owns several pubs and restaurants in the city.

“We are closed six months tomorrow. And the PPP program is now gone, so we have no access to capital...and now we have 25 percent indoor dining. I don’t know what balance sheet our elected officials work off of, but the last time I checked a business ...can not survive on 25 percent revenue."

Great turnout at City Hall on Monday! Let's keep this going untill the Mayor gets the message, we want to get back to...

Joe Smith, a native of Belfast and owner of the Bobby Van’s chain of steakhouses in New York and Washington, D.C., told those at the rally that 25 percent capacity will not pay the bills.

“Fifty is the number we have to open with, and by November, 100 percent,” he said.

Irish establishments such as the Grandstand in Maspeth, Malachy’s on West 72nd Street, and the Stout bars in New York were well represented with banners and out of work employees. Robert Mahon from the Pig n Whistle group, son of the legendary New York Irish restaurateur and publican John Mahon, said the industry needs to “get people inside.”

"We need to get 100 percent sooner rather than later, 50 percent would be a start, but as we said winter is coming and we need to get more people inside. We’ve struggled long enough over the last six months,” he added.

Smith said the rallies at City Hall will continue until there’s concrete relief for the industry. “We’ve got about 1,000 people here and you all have 10 friends. Tell them you’re going to come here in two weeks from today and we will be better organized. We have a great group of people here,” Smith said.

“The more that are here, the more they will listen. This is just the start.”

Cuomo said that if New York’s Covid-19 infection remains low in the weeks after the September 30 restaurant reopening, he will allow 50 percent indoor capacity in November. But those involved in the restaurant industry say they can not wait and fear that more establishments will close their doors for good before then, especially with the loss of outdoor dining on October 31.

The next #NYCRestaurants march and rally at City Hall is set for Monday morning, September 28.