Irish unemployment levels have dropped to a new post-crash low of 6.1 percent for the first time since June 2008. 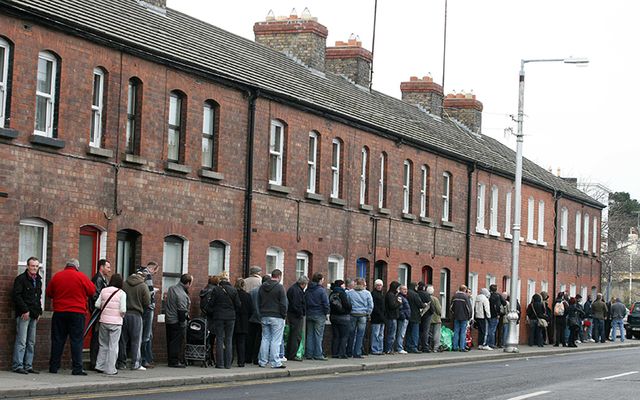 Dole lines such as these in Dublin in 2009 are becoming shorter. RollingNews

The number of workers classified as unemployed fell by 200 to 133,200 in September according to the latest CSO figures, which they say equates to an annual decrease of 31,600.

Peaking at an eye-watering 15.2 percent at the height of the crash in 2012, the unemployment rate is now three points below the Euro-area average of 9.1 percent the office says. Based on current trends in the Irish job market, unemployment is projected to fall below six percent this year, which in Ireland is considered close to full employment.

Read more: Which job sectors are growing in Ireland in 2017?

Only 44 percent of Irish emigrants have a third-level education. Image: iStock.

But warnings are being given by the Economic and Social Research Institute (ESRI) which says the economy runs the risk of overheating at this level of unemployment. Mariano Mamertino, an economist with recruitment website Indeed told The Irish Times that the latest CSO numbers provide evidence of the tighter Irish labor market.

The new figures make it all the more important to attract highly qualified immigrants to address skill shortages in the economy, he said. Mamertino added that recent CSO data shows that 64 percent of immigrants coming to Ireland have a third-level qualification, while only 44 percent of those leaving do.

“This suggests a welcome brain gain, as Ireland’s position as one of the fastest growing economies in Europe can attract highly educated candidates for available jobs,” he said.

Economists warn that youth unemployment in Ireland must be addressed

Merrion economist Alan McQuaid also saw grounds for optimism in the latest figures, saying they were “a touch softer than expected.”

However, McQuaid noted that the adjusted youth unemployment rate remained high, although it dropped to 14.8 percent in September from 15.3 percent in August.

“Although it has fallen from 18.2 percent at the beginning of 2016, the bottom line is that youth unemployment is still far too high,” he said.

“The government needs to put particular focus on getting this rate down into single digits and quickly, though that is easier said than done,” he added.

McQuaid said that while emigration has been a factor in keeping unemployment down in the immediate aftermath of the financial crisis, the Irish labor market has remarkably improved over the past few years, reflecting the strengthening of the Irish economic recovery.