Pubs that do not serve food in Ireland are to remain closed until at least August 30 thanks to coronavirus. 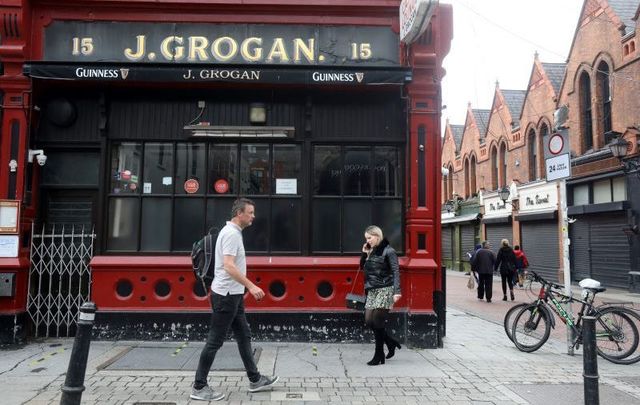 Grogan's in Dublin is one of the many pubs in Ireland that has remained closed since March. RollingNews.ie

Just when we thought we had it under control here, Covid has come back to bite us.

Editor's Note: This column appeared in the August 12 edition of the Irish Voice newspaper, sister publication of IrishCentral.

The low number of cases in the last two months had lulled many of us into the feeling that the worst was over, that we could afford to relax a little. But over the past week or so it's all gone wrong again with the number of cases suddenly climbing rapidly.

The 14-day figure for the incidence of the disease in Ireland has multiplied by a factor of seven over the past three weeks. The national incidence rate here is now approaching the same level as that in some other countries in Europe which have been struggling to contain the virus.

We are almost at the same level as the UK, for example, which we had been looking at with sympathy as being much worse than ourselves.

This trend has alarmed our health experts. As a result, three counties in the midlands which have seen the sharpest spike in case numbers -- Kildare, Laois, and Offaly -- were put on lockdown again last week. And the thousands of "wet" pubs across the country (the small bars that do not serve food) which were supposed to open last week after being shut for months were told to remain closed.

Kildare, which borders Dublin, is the worst with an incidence rate that is eight times the national average. And this has happened at frightening speed.

The only reassuring thing is that the resurgence appears to be localized in the midlands. Most of the rest of the country remains at low case numbers.

Even so, the situation here now is concerning and has everyone worried again because we know it could go either way. That said, it's not a crisis so far and the health experts remain confident we can get on top of this again.

But the relaxed, almost casual, attitude to the virus has evaporated. “Learning to live with the disease" is no longer just a phrase; it's sinking in as a reality.

One of the consequences of the sudden increase in case numbers is that the government is again looking at all the factors that might be at play, including travel. By the end of this week, it is likely that non-essential travel from other countries with a high incidence rate will be stopped. That will include flights from the US, although the expectation is that Irish citizens who want to come home will not be included in this ban.

In fact, the analysis of cases here shows that travel is a very low causative factor, at around two percent.

Even so, the government wants to be seen to be doing everything possible, and the continuation of flights from the US has been heavily criticized in recent weeks. So an announcement that all non-essential travel from the U.S. is to be banned is now virtually certain.

Read More: No green light for US tourists in Ireland

Our main problem right now, however, has nothing to do with travel. The spike in cases in the midlands emerged mainly in a number of meat processing factories.

In one facility, after a small number of workers showed symptoms, all the staff were tested and close to half of the workforce was positive, even though most were not symptomatic. That really set alarm bells ringing since it showed just how widespread the unseen spread of the virus may be.

You will remember there was a similar problem in meat factories in the US, so what has now happened here might have been expected. Workers in our meat plants are on production lines where they stand in close proximity. The work is physical and distancing is difficult.

Many are immigrants on low pay which means they share accommodation to save money. All of this means that infection spreads quickly among them, at work, and at home.

The staff in a couple of the affected plants includes workers who are asylum seekers living in shared rooms in direct provision (DP) centers (since 2018 some asylum seekers here now have the right to work). Again, this facilitates the speedy spread of the virus if someone is infected.

Across the country, a small number of people in around half of the 40-plus DP centers have tested positive. Given the overcrowding in some of these centers, this should not be a surprise. And there is no easy answer to the problem.

People who live in Kildare, Laois, and Offaly, and people who run small businesses there, are angry that they all have to endure being back on lockdown again. Many take the view that if an intensive testing program at meat plants and DP centers had been ongoing in recent months it would have identified the problem at an earlier stage, allowed it to be contained, and avoided the need to put the half a million people in the three counties on lockdown again. The lockdown is not total, but it limits movement and is a disaster for small businesses like cafes, bars, and restaurants which are now closed again.

Read More: Are Ireland's pubs being reopened too soon?

Across the country, the worsening situation means that the "wet" pubs are the businesses most affected.  These are the small bars that don't have the facilities to serve food.

They have been closed for months now and were desperate to open again as promised last week. That hope is now gone. They have been told the situation will be reviewed at the end of the month, but many think they could be closed for the rest of the year and will go out of business as a result.

It's easy to say that this should not matter and that we have more important issues to confront. But that underplays the role of these small bars in towns and villages across Ireland where they are a vital part of social life. The pubs -- short for public houses -- are usually family-run businesses that offer a home from home where local people can meet, talk and relax over a drink.

Without them, local life is diminished and isolation increases. If we lose them  -- and this virus closure comes after the smoking ban, the introduction of tough drunk driving laws and other changes that have put hundreds of them out of business in the last few years -- we will lose part of what makes Ireland unique. And once they are gone, they won't be coming back.

Just as in the US, the UK, and other countries, the main focus of the government here now is to ensure that schools can fully open again in a few weeks after the summer holidays. This is seen as vital in returning to some kind of normality, allowing more people to go back to work and enabling the economy to get going again. We are being told that to enable this to happen we will have to accept other restrictions to reduce social contact.

Top of this list are the pubs, which is why they may have to remain closed until we can get the case numbers way down again. And that could take months.

The association of pub owners has reacted angrily to this prospect which is not surprising since they are now in a battle for survival. They argue that there is now one rule for cafes and restaurants and bigger bars that serve food -- and another rule for the small "wet" pubs.

They say that the small pubs in towns and villages around the country are part of the community and that the owners can be relied on to act responsibly and enforce whatever rules are necessary on distancing, opening hours, and so on. They point out that they implemented the smoking ban successfully a few years ago and this situation is similar.

But the health experts, the government, and all the rest of us know it's not quite as simple as that. Many of these pubs are small, poky little bars where distancing is not possible.

The whole point of these places is to enable people to meet and mingle closely.   And once everyone has a few drinks on board, separation rules would be difficult to implement.

In Irish pubs, when the closing hour approaches the barman calls out “Time Please!” This awful virus could now call a permanent Time Please! for many of the small pubs in Ireland, which would be a great pity.

Read More: Ireland must be cautious as COVID crisis continues