Ireland's Minister for Justice Helen McEntee announced on Thursday that the residents at Skellig Star, who had been hunger striking for three days, will be moved out beginning next week. 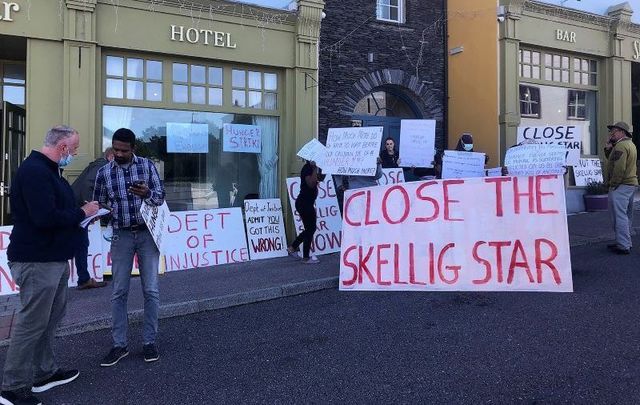 The scene outside of the Skellig Star Direct Provision Centre in Cahersiveen, Co Kerry on July 28 when asylum-seekers residing there mounted a hunger strike. Alan Landers / Solidarity with Skellig Star Hotel Residents, Facebook

Asylum-seekers who have been living in the "emergency accommodation" at the former Skellig Star hotel in Co Kerry have welcomed the news.

More than 30 asylum seekers have suspended the hunger strike they mounted on Tuesday after Minister for Justice Helen McEntee confirmed that they will be moved out of the Skellig Star Direct Provision Centre in Cahersiveen, Co Kerry.

The residents at Skellig Star DP began their hunger strike on Tuesday, July 28 citing "inhumane conditions," including a lack of cleaning and sanitization after a coronavirus outbreak in the residence, as well as the rationing of water amid a boil-water notice in the town.

Among the group’s demands was the request to be moved out of Skellig Star, a former hotel that was transformed into “emergency accommodation” in March as coronavirus began to spread in Ireland, and into direct provision centres in either Tullamore or Mosney.

On July 30, as some residents of Skellig Star were in their third day of hunger striking, local TD Brendan Griffin said in a tweet that he received confirmation from Ireland’s Minister for Justice Helen McEntee that the residents will be moved out of the centre:

I received confirmation today from Minister Helen McEntee that the first families will be moved out of Cahersiveen Direct Provision Centre by the end of next week & plans for its total closure in the coming months are underway.

Speaking in the Seanad on Thursday, July 30, McEntee said the situation at Skellig Star “is a matter of deep regret to me.”

“I’m very sorry that the residents of the Skellig Star in Cahersiveen felt that their concerns required this type of action," McEntee said, adding, “When a group of people feel they need to put their own health at risk by refusing food to have their concerns listened to, it’s a very serious situation.”

“Places for the first families are currently being identified and moves for them will be completed by the end of next week.

“Other residents in the centre will be moved to permanent accommodation as soon as spaces can be found. This process will be completed in a relatively short period of time, and no more than a few months. Realistically though I would like to see this done by the end of the year.

Additionally, McEntee said: “The replacement of the Direct Provision system will not happen overnight, unfortunately. The existing centres will continue to operate in the short to medium term, but further changes will be made.”

McEntee outlined some of the potential changes:

McEntee said she is liaising with TD Roderic O’Gorman, Ireland's Minister for Children, Disability, Equality and Integration, whose department is set to assume responsibility of the direct provision system.

In a tweet on Thursday, O’Gorman said he “welcomed the news” that the residents are set to be relocated:

Welcome news that residents will begin to be moved out of Skellig Star. I thank @HMcEntee for her work on this.

I'm determined to improve conditions for everyone in Direct Provision as we work to end it. https://t.co/FBIpPglLOy

In the wake of the development, the Fáilte Cahersiveen Group, who advocated for the asylum seekers at Skellig Star, issued a statement that said in part that they welcome McEntee's announcement.

After thanking the politicians and journalists who helped focus on the story, the group said: “We regret that the residents felt compelled to engage in a hunger strike in order to have their voices heard. From the day these residents arrived in Cahersiveen, the local community welcomed them in spite of difficult circumstances. Over the weeks and months, we listened to their concerns, we believed them, and we came together as a community to amplify their voices.

“We wish the residents well in their new accommodation. We remain their firm friends and advocates and will keep a watchful eye over them. We will maintain this link in the hope that some of these, or any refugee families, in the future, will feel welcome to integrate fully and properly into our rural community.

“We look forward to seeing Minister O’Gorman fulfilling his promise of ending the current system of Direct Provision. "

One of the centre’s residents, Azwar Fuard, a native of Sri Lanka, said: “We feel good about the news, and we are very grateful to the people of Caherciveen who supported us. This should have happened some time ago but at least it is now happening.

“We feel very happy and we believe the Government will keep its word. We don’t yet know when we will all be gone from here. And we don’t know where we will be going. But at least this time we hope they will do it properly and not repeat the mistakes of the past.”