Asylum seekers at the Skellig Star Direct Provision center in Cahersiveen have made three demands as they mount a hunger strike. 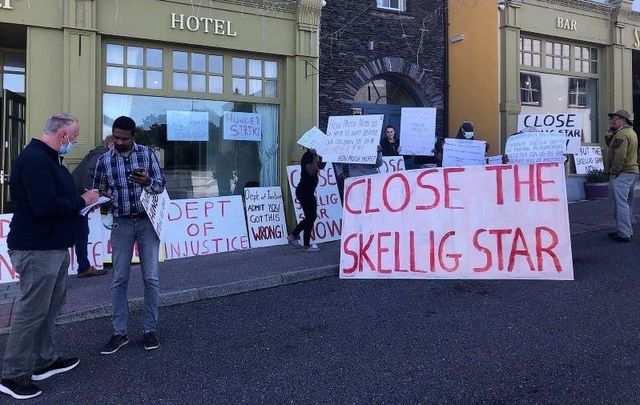 Asylum seekers being housed at Skellig Star, a former hotel, in Cahersiveen, Co Kerry mounted a hunger strike that began at 10 am on Tuesday, July 28 in protest of "inhumane conditions."

The hunger-striking asylum seekers said in a statement issued on July 28: “It is almost four consecutive months of living in an inhumane condition at Skellig Star Hotel Direct provision and the past and present government has not done anything to help us from this open prison.

“We have sent emails several times highlighting how we have suffered physically, socially, mentally, and emotionally due to the treatment received in the hands of IPAS [The International Protection Accommodation Service] during covid and post covid.

“We have been traumatized and for us to recover from this we need to be all moved out of this accommodation immediately by the Ministers (Deputy Gorman and Deputy McEntee) to appropriate accommodation centres. We are just 41 ASYLUM SEEKERS remaining including 7 children. More than 30 asylum seekers left the centre to different parts of the country because they preferred to be on the street than to continue live here.

“Our demands are as follows;

TD Roderic O’Gorman, Ireland’s Minister for Children, Disability, Equality and Integration, addressed the situation in a series of tweets on July 28:

1) Throughout today, I’ve kept in regular contact with @HMcEntee about Cahersiveen. I’ve been informed that IPAS officials visited Cahersiveen today, and engaged with residents about the concerns raised.

O'Gorman continued: “Responsibility for Direct Provision currently rests with Dept of Justice, and will be transferred to my Department in the coming months. I know that Cahersiveen is just one part of much wider, more fundamental problems with the Direct Provision system in Ireland.

The Skellig Star, formerly a hotel, has been plagued with problems since it opened in March as an emergency Direct Provision center during the coronavirus pandemic. More than 100 asylum seekers were sent to the 56-room hotel, according to The Irish Times.

Local Fianna Fáil councillor Norma Moriarty told The Irish Times that the former hotel "was a huge asset to cafes, restaurants, and bars. It functions best as a short stay hotel, not as a direct provision center."

25 cases of coronavirus were confirmed at the center where social distancing was difficult if not impossible to maintain. Residents have since claimed that there has been no deep cleaning or sanitization of the facilities despite the outbreak.

Further complicating matters, the town of Cahersiveen has been under a “boil water” notice since July 9. Residents at the center claim their water is being rationed to just 1 liter a day, with local residents helping to “fill the gap.”

The message from the Skellig Star has not changed since April.

Day One of the residents' hunger strike is just coming to a close, after a socially distanced protest with local residents of Cahersiveen.

Azwar Fuard, a native of Sri Lanka who is now being housed at Skellig Star, told The Irish Times: “Think of the pressures on our mind, locked in a small room. One by one getting Covid. We suffered for four months in the same building.”

Fuard said residents at the center were not allowed to leave in the wake of the outbreak for almost two months, had no cooking facilities, and “all the time we have to beg” for basic necessities.

“I came here to live," Fuard said, noting that many of the residents fled trauma, torture, and rape in their homelands, "not to face something like this.”