Ireland must be cautious as COVID crisis continues

As more coronavirus restrictions begin to be rolled back, and travel into Ireland remains open, it's more important than ever to remain cautious in the face of COVID 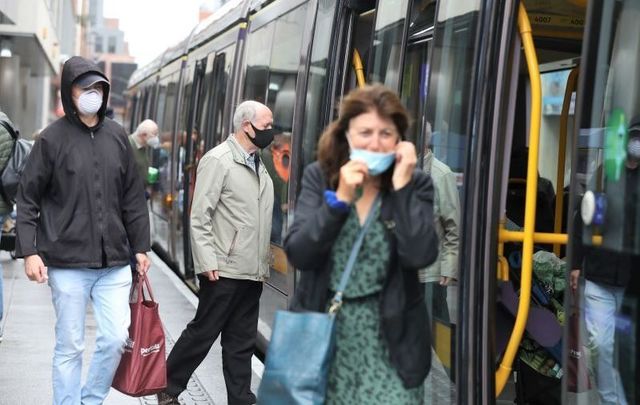 People wearing masks as they board and disembark the Luas in Dublin's City Center on July 4, 2020. RollingNews.ie

Given the dire Covid situation in the U.S., it's unlikely that many Americans will be making a trip to Ireland this summer. But if you’re hoping to do so, you should note that the travel and tourism situation here is limited and confused and likely to remain so for a considerable time.

The virus here is now well under control with very low numbers, but there is a real fear that foreign travel could compromise that. So despite its huge importance to the economy, tourism here is operating at a fraction of its usual level.

You can fly into Ireland. But if you do, you will be expected to quarantine for 14 days on arrival. That applies to all passengers arriving here from other countries -- and given the present infection rate in the U.S., it most definitely applies to tourists coming from there.

It means that for the first 14 days of your visit you will be required to remain in isolation in your hotel, B&B, holiday rental, or the home of relatives or friends you might be staying with here. And isolating means just that, remaining in your room and having minimal contact with anyone else.

Spending 14 days stuck in a hotel room is not going to appeal to many tourists. For that reason and because of social distancing requirements, the main tour bus operators here have shut down. Many tourist attractions are either not open at all or only open on a limited basis.

All travelers into Ireland, whether they are tourists or not, are required to fill out a passenger locator form on arrival which gives your personal details, phone number, flight, reason for your trip, and other information including, most importantly, where you will be isolating. Failure to fill out this form is punishable by a substantial fine or a prison sentence.

The reason for the form is clear enough -- if someone arriving here develops COVID symptoms, the authorities want to be able to deal with them and also to test everyone else who was on the flight.

But here's where it gets a bit confusing. We're very good at announcing rules and regulations here. We're not so good when it comes to enforcing them.

So although passengers arriving here are legally obliged to fill out the locator form, it's far from clear how much follow-up is happening to check whether quarantine is being done effectively and for how long.  Several reports suggest that a significant number of people arriving are not filling out the forms accurately and don't answer follow-up calls checking on them.

This may be a moot point for Americans who had planned a vacation here this summer because, as we said, even though many hotels and B&Bs are now open again, many of the popular attractions are not operating or are doing so only on a very restricted basis. Our tourism industry has been decimated with current turnover down at least 75 percent on the same period last year, and most of that is coming from Irish people holidaying at home.

It's not just foreign tourists who want to come here who are a concern. The authorities are even more worried about Irish people who want to get away on their usual summer holiday to France or Spain or Portugal and who could re-import the virus when they come back after their two weeks in the sun.

That has not stopped Ryanair bombarding us for the past two weeks with emails offering cheap flights to all the sunny destinations in Europe. Like all the airlines, they are fighting for survival and desperate to get things moving again. But the government is still advising people here to avoid non-essential travel outside the country and reminding everyone that if they do go, a 14-day quarantine will be necessary on return.

In addition to that, the government has pointed out that the pandemic unemployment payment (€350 a week) will not be given to people while they are on holiday outside the country and for the two-week isolation period when they return. But how this will be enforced is unclear if payments are being made directly into bank accounts and people do not own up to being away.

The new government is only a week or so in office and it is struggling to deal with this situation. Last week some Irish people going abroad on holiday were interviewed at Dublin Airport and seemed to be taking it all as a joke.

They had no fear of catching the virus ("we're too young and too healthy") and had no intention of quarantining when they came back ("we'll quarantine in the pub.") Nor were they put off when told that their travel insurance is not valid while the government is advising against foreign travel.

As you may know, we are now in phase three of the reopening here.  Since last week's bars that serve food, cafes, and hotels have been allowed to fully open again as long as they follow the mitigation rules. Last weekend there were a few side streets in Dublin city center where young people congregated to party, ignoring the rules.

But the pictures of this that went viral are misleading. The reality is that most of Dublin is still a ghost town in the evenings. The distancing and sanitizing requirements mean that many bars and restaurants find it difficult to be profitable and for that reason have remained closed.

The tourism industry here, which employs hundreds of thousands of people, is warning the government that there will be widespread and terminal damage to the sector unless there is more state support and, above all, more clarity.  This week the government was supposed to issue a list of countries that would be safe for inward and outward travel without a requirement for quarantining, but that has now been postponed and will not be compiled until July 20 at the earliest.

This so-called green list will be of countries that have similar or better virus containment rates to ourselves and on that basis won't pose a higher level of risk. This would allow an agreed "air bridge" with these countries allowing travel without quarantine.

The problem is that the situation keeps changing and renewed outbreaks in recent days in Spain, Portugal, the U.K., Germany, and elsewhere have spooked the new government here.

Complicating the situation even more, of course, is our common travel area with the U.K. What's to stop someone going to the U.K. and flying on to holiday destinations from there (as many Irish people already do) and coming back again via the U.K.?

Last weekend, despite its own worrying level of infection, the U.K. issued a list of around 50 countries where people can travel and not be required to quarantine either when they get there or when they come back. This may well be attractive to people here who want to travel for a sunshine holiday.

One thing that is clear is that if our government does issue a green list of countries on July 20 it will be accompanied by new arrangements for testing at airports and ports. Not everyone will be tested.

Instead, according to Green Party leader Eamon Ryan, the testing will be targeted. This will mean that people arriving from an area where infection rates are high will probably be tested and may be required to isolate until the results are available. Follow-up monitoring will be intensified and rigorously enforced.

It seems likely that the countries on our green list will not include the U.S., unless there is a dramatic improvement in infection rates there. And that, of course, would mean that tourists from the U.S. would continue to have to quarantine for two weeks on arrival here, which would mean few, if any, would come.

A simplistic view on all this -- one that is seen frequently on social media -- is that we should take advantage of the fact that we are an island and shut down all foreign travel for the time being. But that is not practical and probably not achievable given our arrangements with the U.K. and the invisible border with the North.

Aer Lingus is still flying to the U.S. every day and it is essential that this continues for business and for people who must do essential travel across the Atlantic for various personal reasons.

One final point about the drinking and partying on the street seen in a few places in Dublin last weekend -- in Temple Bar and Dame Lane -- following the reopening of pubs that sell food. Photos show there was little social distancing.

In response, Taoiseach Micheál Martin has warned that this could force the government to delay the reopening of all the rest of the pubs that don't serve food which is supposed to happen on July 20.  The taoiseach said the government was "deeply concerned" by the scenes.

Of course, there is one simple answer to this  -- close any bars which sell alcohol for consumption on the street and also make on-street drinking a serious offense attracting an immediate and substantial fine. And failure to pay means being arrested.

We have come too far to take any chances now in letting our infection rates climb up again. That is the new government's position and most people here support that, even if it is disastrous for travel and tourism.

When we see the nightmare that is playing out in the U.S. right now, it makes people here even more determined that we should be cautious rather than take any risks.