As the public flaunts the new Irish pub post-COVID lockdown rules the reopening of all pubs is now in question. 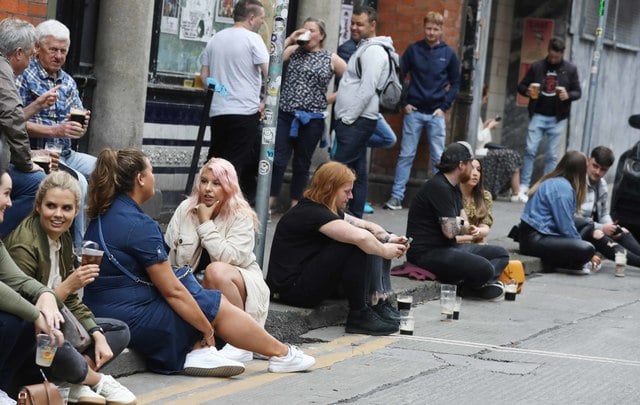 People drinking outside a pub on Dame Court in Dublin on Saturday afternoon. RollingNews

Taoiseach (Prime Minister) Micheál Martin has threatened that plans to reopen all pubs on July 20 may not go ahead.

His warning followed garda reports of blatant breaches of Covid-19 public health guidelines last weekend in bars already opened – those which serve food with drinks. It also came after reports appeared of massive drinking sessions in the 105 minutes customers are allowed to remain at their bar tables.

Tabloid newspapers reported that a Dublin group of four young women picked up a bill for €265 which included 23 shots of a liqueur-based drink, 10 Red Bulls which is non-alcoholic but was mixed with baby Guinnesses, three Beefeater gins and one bottle of wine.

Another group of five men in a different Dublin pub worked their way through 15 pints of Guinness, five pints of Bulmers, five Pinot Grigios and one Sauvignon Blanc in their permitted one hour and 45 minutes.

Gardaí walking around the streets in Dublin City Centre to make sure pubs are not breaking the guidelines on social distancing, serving food or time limits etc

Yet this is allowed on Dame Lane..... pic.twitter.com/4inEgsY2Rm

After a Cabinet meeting discussed a garda report on Monday, Martin said, “Nothing can be guaranteed. If this behavior is to continue, we will have to seriously review it.

“We want pubs to open safely but we can’t be blind to what is going on right now. We are not happy with what transpired in certain locations over the weekend.”

Martin said the government was worried about the contents of the briefing from senior officers.

The Irish Times reported that Gardaí warned ministers that a number of pubs are “blatantly breaching” Covid-19 public health guidance, but carrying out thousands of checks will become a significant drain on the force’s resources.

Officers experienced a “challenging” weekend particularly in relation to pubs in Dublin city center where physical distancing was not being practiced.

A senior government source said Gardaí had advised that while there was generally good compliance, some pubs were “blatantly breaching guidelines and did not rectify the issue when they were given a chance to do so.”

Gardaí may now consider appealing any application by these premises to renew their license in September.

The pubs that serve meals were allowed to open on June 29 with instruction that each customer had to order a substantial meal with drinks and could only remain inside for one hour and 45 minutes.  But the rush to the pubs didn’t start until last Saturday night.

Pubs that don’t serve meals were told they would open on July 20 – but that could be put back following the taoiseach’s warning.

Also delayed is a “green list” of countries the government planned to publish for travelers this week.

The list has now been put back until July 20 following a Cabinet decision on Monday to extend the current advice to the public to avoid all non-essential travel until that date.

Travelers have been warned that when the green list is published they may still have to quarantine upon their return if there is a spike of cases in the country visited.

Some 17 percent of new cases of Covid-19 are now linked to foreign travel while there has been a sharp increase in footfall in Dublin Airport.

The Department of Health will examine proposals for testing at entry points to the state and the government will seek to outsource a call center to check on passengers returning to the Republic who are advised to self-quarantine.

Medical chiefs said that as Ireland continues to keep the Covid-19 disease under control, the decision to delay publication of a green list gave more time to see what happened in other countries.

A COVID-19 tracking app was launched on Tuesday morning after the Cabinet approved its use.  Health Minister Stephen Donnelly has reported that after just one day online the app has been downloaded close to one million times.