Could Irish James Gallagher be MMA’s next Conor McGregor?

Tyrone fighter is eager to make his own mark. He’ll fight in Madison Square Garden next month and can’t wait to show local Irish what he’s made of. 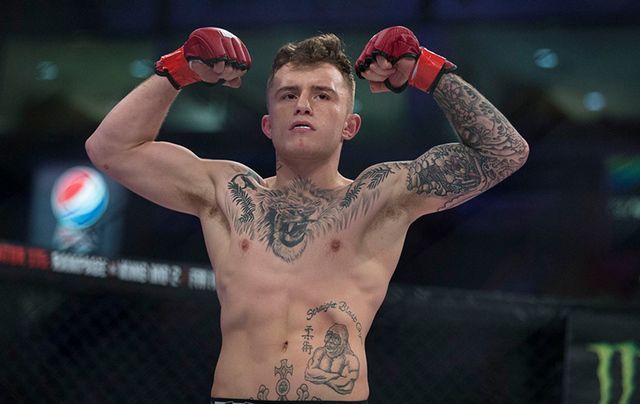 Conor McGregor is the most famous MMA star in the world, but James Gallagher from Co. Tyrone is eager to make his own mark. He’ll fight in Madison Square Garden next month and can’t wait to show local Irish what he’s made of.

Who is going to be the next Conor McGregor?

A rising mixed martial arts (MMA) star from Co. Tyrone says he has a much bigger goal in mind: to be the first James Gallagher.

“Conor is amazing and a great friend, but being like him, that’s not my goal at all,” Gallagher, just 20 years old and already with six pro wins to his credit, told the Irish Voice during a recent phone interview.

“I want to be a world champion and the best there ever was, but I want to do it under my terms.”

Gallagher, originally from Strabane – hence his nickname “Strabanimal” -- is signed to Bellator MMA, a Southern California-based rival to the wildly popular UFC that McGregor and Ronda Rousey put on the map.  Bellator is majority owned by Viacom, and its fights are televised on pay-per-view and Spike TV.

New York-based MMA fans will have the chance to see featherweight Gallagher in action on Saturday, June 24 at Madison Square Garden in only the second MMA card ever presented at the venue.  At Bellator 180 he’ll fight a Brazilian literally twice his age, Chinzo Machida, who owns a 5-2 record that doesn’t quite measure up to Gallagher’s perfect 6-0.  The young Irishman says he’ll have no problem at all securing his seventh straight win.

Gallagher, the youngest of three boys – his proud mother and number one fan, Doreen, reached out to the Irish Voice about her son – has aspired to be a champion athlete since he was a child.  Like many kids he took karate lessons starting at age six, and when a local MMA club opened when he was 12, Gallagher joined.  He hasn’t looked back.

MMA became his obsession, so much so that Gallagher dropped out of school at the age of 15 to pursue his dream of pro glory.  How did his parents react to that bit of news?

“Well, at the start it took them a while to come around, but they could see how passionate I was about the sport and how much I loved it and enjoyed what I was doing,” he recalls.  “They decided to let me follow my dreams.”

Young James had a key advocate in his corner, none other than John Kavanagh, head of the Straight Blast Gym in Dublin and coach of another MMA aspirant – a trainee plumber named Conor McGregor.  Kavanagh was present when Gallagher first fought, and won, as a 13-year-old.  He liked what he saw – the teen made quick work of a 21-year-old opponent -- and soon young James was heading to Dublin for training at Kavanagh’s gym at least two times a week.

The journey was at least four hours from Strabane, but Kavanagh had a solution to that problem: James could move in with him.

“It was a lot of traveling from Strabane so John offered.  I lived with him for nearly three years and trained constantly,” Gallagher says.

Straight Blast Gym has exploded since the rise of McGregor, the most famous MMA fighter in the world.  “It’s massive really and has totally taken off in the past three years,” says Gallagher.  “Straight Blast was smaller when I first joined but now it’s so huge.”

Gallagher knows McGregor well.  They’ve trained together many times, and Gallagher has genuine respect and affection for the 28-year-old who looks as if he’ll break all kinds of box office and purse records with a likely mega-fight against boxer Floyd Mayweather.

“Conor blew up the sport in Ireland. We’re good friends. He’s just an amazing guy to be around,” Gallagher says.

“He’s very positive. He’s helped me in many ways. He always talks about how important it is to believe in yourself.  In the gym he’s always there for me, helping with techniques and ways that I can improve.”

Gallagher used to fight on the same cards as McGregor when he was an amateur.  They shared a dressing room, and that’s how Gallagher first met Kavanagh.

“Conor was once in the position that I’m in now. He’s very good at giving advice. I’m very appreciative of all he’s done for the sport and all that he has done for me,” Gallagher says.

What makes McGregor so formidable and fearless?  His total obsession, Gallagher says.

“Conor’s mindset and work ethic make him very hard to compete against.  That’s what it takes. You have to believe in yourself.  You have to put the work in and have the confidence to stick your two fingers up at everyone who is telling you that you can’t do it.”

A day in the life of a budding superstar is actually fairly routine, Gallagher says.  He’s a late morning riser, and after he wakes it’s right to Straight Blast for a three-hour workout.  Then it’s home for lunch and a rest, followed by a return to the gym for another few hours of work.  The routine is seven days a week, “and I just love it,” he adds.

Bellator took notice of Gallagher when he was fighting and easily winning his initial pro bouts in lesser promotions.  He signed a contract with Bellator last year.

“A lot of people were taking notice of me and I was getting publicity.  They scouted me and said we need this guy. He’s going to be the next big superstar,” Gallagher said.

He’s well on his way to fulfilling those expectations.  Gallagher made winning look easy in his last fight in Belfast, which he notched by submission in round one thanks to his signature move: a rear-naked choke hold.  Heavily tattooed with a lion on his chest and a left arm smothered in various designs, the Strabanimal talked good smack after the February match-- after giving a loving shout-out to his mother Doreen.

“I’ve finished off all my opponents and if you look at the matches you would say they are easy fights, but every fight presents a different task. None of them are easy, but the reason why they look as if they are is all of the hard work that goes into getting there,” Gallagher says.

He’s training hard for his fight at Bellator 180, the organization’s Madison Square Garden debut that will be topped by light heavyweight and former UFC star Chael Sonnen.  The mental toughness required to take center stage in the world’s most famous arena is formidable, but Gallagher says he’s ready.  Coach Kavanagh will also be there on the night in his corner.

“Walking out in front of 20,000 people at Madison Square Garden is a big thing when you are only 20 years old.  You just have to believe in the work that you are putting in, and that it’s going to carry you through.”

Gallagher is well aware that Manhattan turned into Irishtown last November when McGregor made history at the Garden by winning his second UFC belt.  The Irish turned out in force to support their idol, and Gallagher says those fans won’t be disappointed if they return to see him in action on June 24.

“I want them to know that if they want to enjoy some good entertainment, there’s no better man to come and support,” he says.  “I want to thank the people in New York who already know about me. I’m grateful for their support and everybody’s support.”

Gallagher will take a brief breather after the match, returning to Strabane to connect with family and friends “and walk my dog,” he laughs.   “But I get bored of that after a week. Then I start itching to get back into the gym, so that’s what I go and do.  And I’ll never stop. I want a championship belt and that’s what I’m going to get.”

(For tickets to Bellator 180, visit www.ticketmaster.com)